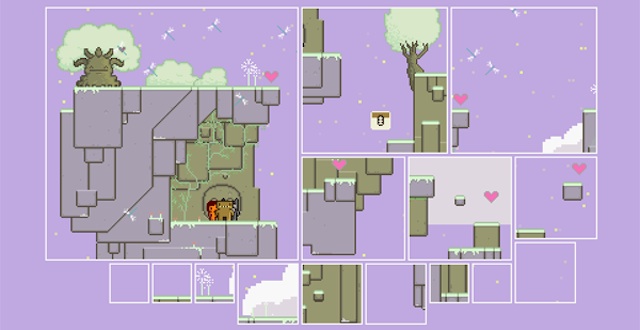 Title:
Where Is My Heart?

This is a coming-of-age story. A boy and his parents get lost in the woods. Struggling to find their way back to civilization, their worst personality traits are aggravated to the surface. The boy becomes solipsistic and bossy. The mother anguishes and laments. The father is brooding and somber. They are each others’ worst enemy at this moment, but if they’re ever going to get out, they must learn to coordinate.

You know how this story goes. Except in this one, the brown boy transforms into a caribou. The orange mother is an angel. The black father is a vampire bat.

Die Gute Fabrik’s Where Is My Heart? for PlayStation 3 swaps the human family for three furry creatures, and entanglement in a deep wood for 26 spatially fractured levels. They have lost their Heart Tree, and to find it, they must traverse the levels of a puzzle platformer, each fragmented into non-sequential panels. It is as though someone took the storyboard of a comic book, shook it like a snow globe, and let the pieces fall in random order. Carefully, you move from panel to panel, inching delicately, alternating between the three characters with the push of a button—to see where each one connects to the next.

Each character transforms by jumping onto color-coded boxes—sometimes on top of each other, reinforcing the theme of teamwork—which reveals a special ability pertinent to solving puzzles. The solipsistic caribou shifts time from the brightness of day to the enigmatic, beautiful darkness of night. Here he is the boss, his parents transformed into little sprites which gravitate around him as he double-jumps to greater heights. The morbid angel of a miserable mother smiles wanly as a controller input allows her to ethereally shift between panels. And the vampire bat reveals platforms, passageways, and more sinister visuals hidden behind the game’s cheery veneer.

Along the journey, you consume hearts scattered in each level. Each heart you obtain may be lost if you die within the level (and you probably will, more than once); however, the ones you’re left with after completing a level are yours for keeps. Despite the word “heart” being in the game’s title, it’s hard to say what purpose they serve other than to distract the player: some hearts can be hard to reach and result in a complete wash. The game challenges you to procure a certain amount, compelling you to restart a level if you happen to miss one. Yet this does nothing to halt progress, since getting from one end of a puzzle to the other is more important than all else. You’re bound to pick up a few hearts on the way. One might do well to just ignore them …

… but wasn’t the whole point to gain a heart—to relearn my humanity, by witnessing a deepening bond between the three creatures? Perhaps finding home again is more important than getting along. But what about the emotional truths implied by this story about cooperation and family? Are these meant to resonate? Why don’t I come away with those feelings affirmed?

I deeply, desperately want to love this game. The puzzle design is often clever, subtle, and refreshing. The metaphors that arise from the dynamics of gameplay and the careful attention to aesthetics are abundant, and clearly wish to be compelling.

But I feel like this game is lying to me.

For all its cute, vivid, 8-bit aesthetics, Where Is My Heart? is not about beauty. It’s about darkness. The boy-caribou shrouds my vision with twinkles and pretty colors. The mother-angel offers the false promise of divine control. And the father-vampire-bat is the only one telling the truth, revealing the happy little game’s villainy.

Curious elements obstruct my enjoyment and confuse my interpretation. During each level I can press Pause to save, restart, or quit, but afterward have no way to return to my place in the game. Like a door without a knob, there is no Return button. I must instead restart the level altogether, which can be incredibly disheartening in the more difficult areas. The number of times my muscle memory urged me to “press Pause” because I needed a bathroom break I cannot count. I kicked myself every time.

Its cupidity, the elusiveness of its intentions, make us unable to really connect with it.

Other peculiarities start to emerge in play. The platforms are misleading—appearing longer than they are from a few feet away. Without squinting, you won’t notice their actual edges, which are marked by a thin line of pixels sitting atop the surface. This makes jumping frightfully difficult. Certain puzzles, meanwhile, demand exceedingly lateral thinking. While spinning the panels around like a carousel, I must practically guess where in the world the angel needs to fall. This sounds simple, and looks cute, yet is often achieved only after dying multiple times. These are not meant as complaints that the game is too hard, but that the game appears to conspire against the player. When it isn’t trouble solving a puzzle, it’s with simple physical execution. Finally I complete a jump. Then, I accidentally press the Pause button and am trapped again. This menu looks clean and intuitive. And yet, here I am. This game is having more fun than I am, and it’s at my expense.

This is where the vampire bat seems to wink and nod. By showing me the blood-red maws and devilish eyes of ostensibly jolly trees; the deadly spikes of a hidden passage; and the boiling evil of a hot-pink body of water, inverted from serene blue, the bat suggests to the player the sinister nature of this game. But Where Is My Heart? never really lets me in on the joke.

Are the gratuitous hearts supposed to mock the completionist desires of game players? Or are they an earnest attempt to instill this game with emotion? I begin playing Where is My Heart with the impression that it is about cooperation. But maybe it isn’t. Perhaps what it’s really about is losing your pride, about having it challenged. Perhaps this game is trying to get me stressed so that horrible things come out of me, when all I want to do is find my way to the end. Then again, maybe these are all just a bunch of accidents, and I’m seeing good or bad intentions where there are only mistakes.

Where Is My Heart? is like the friend who smiles while robbing you blind and sleeping with your spouse. Its cupidity, the elusiveness of its intentions, make us unable to really connect with it. Despite having to coordinate the actions of the three characters, I’m not sure that I’ve witnessed much bonding or teamwork. But I do feel as though, finally, I have escaped from a deep, dark forest. The end comes with a sigh of relief, but also a feeling of resentment, as though the game has reluctantly shown me the worst of itself. In turn, I showed the worst of myself to the game, making progress slow and flustered—the controller-tossing wrath of a player scorned.