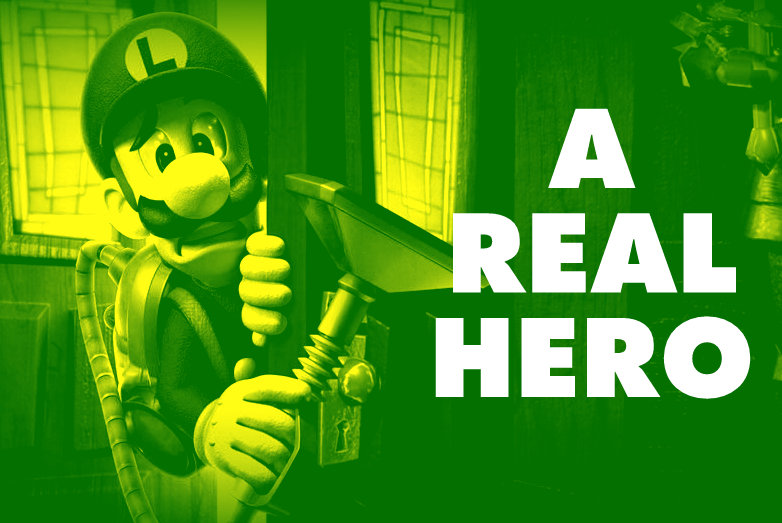 In the pantheon of videogame avatars, we control the slimmest cross-section. Consider the rich, varied potential.

Now consider the characters you’ve controlled in the last five games you’ve played. Slot them in a Venn Diagram of personality. How much does each overlap? How many characters are built from the same mix of nerve endings, mutant brawn and athletic ability, only to be given a different mask to wear: a hooded cloak here, an opaque helmet there? Why can so many leap great distances and dance along vertical walls? How do we manage to gain power after power, growing in strength and confidence, when in real-life our abilities dwindle over time as we lose our sight, our hearing, our ability to jog three miles without hacking up thick phlegm?

Are games really only here to let us forget our limitations and thrive in pretend-lands of zero consequence? What happens if we see ourselves on-screen as we really are: scared, nervous, anxious? Luigi’s Mansion: Dark Moon is that rare game that offers its player, even within the realm of cartoon ghosts and magical vacuum-cleaners, a flawed protagonist with human concerns, and a place where our inherent weakness is acknowledged as a strength.

There’ve been very few bumbling protagonists in a medium known more for the silent confident types, the beefy powermongers, the abstract shape. Games can provide fantasy escapism, even a release valve for forbidden urges. But worse than any graphic displays of violence is how games treat power and force as the default solution. Even where stealth is an option, the act of eventual takedown spawns from aggression. Sneak around a faceless minion only to perform your fifth chokehold in five minutes; trade out that sniper rifle for the more humanitarian tranquilizer dart, shot into an enemy’s neck at 100 mph. Clamp onto their neck with tightened fingers until they collapse, unharmed but violated all the same.

If we’re honest with ourselves, aggression and proaction might are not the common response to our immediate surroundings. But fear or cowardice—ah, now these sound familiar! Whether we’re sneaking through a haunted house or into the back of an office meeting five minutes late, we squeeze through, hoping to be relatively unscathed, rather than push ahead with conviction.

Luigi’s Mansion: Dark Moon plays much like a classic adventure game. You wander through environments layered with hidden significance. Your vacuum acts like a mouse-click; suck and blow to reveal coins, or passageways, or items needed elsewhere. Every once in awhile a ghost appears and you tango with it Ghostbusters-style, though the developers themselves have likened the mechanic more to fishing; once ensnared you pull away from the ghost as it lurches to and fro, trying to escape. But it’s Luigi who doesn’t want to be there.

Much of the game pushes you into awkward, embarrassing situations, revelling at your inability to do even the simplest things right, then rewarding you for pressing on. Enter the mansion and land with your foot stuck in a bucket. By the time you release yourself from its hold, you understand a plant needs to be watered to unlock a secret. Later you’ll investigate a lounge chair, happy to lie down and put your feet up, only for the chair to fold up, squishing you into accordionized oblivion. But then a secret elevator activates, transporting you to the necessary floor.

For each step forward, you will stumble and fall and be smacked around.

For each step forward, you will stumble and fall and be smacked around, because this is how we make progress: Not through enforcing our will upon those weaker than us, but by making mistakes and pushing through regardless, allowing ourselves to be the weak and to know that’s alright.

You’re less the prime mover as you are the poor sap who gets shoved around, fumbling toward accidental triumph. It’s an old story—think the Nutty Professor or Elmer Fudd or John the Baptist—but one we rarely see on-screen with a controller in our hand. Even Luigi’s “weapon” emasculates him: A vacuum-cleaner, which, let’s be clear, is a man’s tool as much as it is a woman’s, but either way does not rate high on the machismo scale.

Even those he rescues think him ill-suited for the job. You save a Toad from a magic painting early in the second mansion, and after he cheers for his freedom he double-takes at his rescuer. “Luigi?” he chirps. Not the brother he was expecting.

The character’s hesitance is built into the level design in clever ways. Notice a ragged slip of wallpaper; aim your vacuum and suck it away, revealing a crack in the wall. Instead of busting through this weak point you merely peer through the hole; you’re given a glimpse of the challenge ahead. Elsewhere you’ll peak through fogged-over windows or open blinds. Then lightning crashes and you yelp, leaping back from your voyeurism, startled but ready to push forward, however stiltingly.

He sighs and wipes his brow, knowing that soon he’ll be taken away from the action, where it’s safe.

Compare the scene to the most famous of videogame haunted houses: In the original Resident Evil, a dog crashes through a window, scaring the bejeezus out of the player. What do you do? You shoot the dog dead. It was less an obstacle to your progress than it was an affront to your boldness, your alpha status. So you show it who is really in control by plowing a bullet into its brain.

As Luigi, you’re consistently on tip-toe. You never want to be here. You’re never not afraid.

At the end of each stage, you exult, leaping into the air with a raised fist and a burst of confetti. But you’re not celebrating your triumph; instead, you’re relieved, happy the opportunity for heroism is over. Even the interface freaks the poor guy out–between levels a ‘Mission Complete’ sign zooms in from the interstitial void and Luigi jumps. He sighs and wipes his brow, knowing that soon he’ll be taken away from the action, where it’s safe.

Unfortunately, it is the game’s cowardice that drags down the sheer joy of playing.

Unfortunately, it is the game’s cowardice that drags down the sheer joy of playing. Your mentor, host and captor, Professor E. Gadd, gives you a DS as personal communicator early on in game. Throughout the quest he chimes in, a jaunty ringtone rendition of the level music blasting from your pocket. Time and again Gadd tells you what to do, where to go. He’s less Virgil, more a 10th grade Chemistry teacher watching over your shoulder while you fumble with the test-tubes. But some of the best results come from accidental catalysts. I wish the game itself was brave enough to trust the player with nothing else but a toolbelt of systems and an environment of subtle clues.

Then again, it makes a kind of sense, this hand-holding. What do we do when we’re afraid to go on? We reach out for another to guide us. Every time my wife and I cross a busy street, I find her palm and grasp it in my own. There’s no shame in accepting help, even if we never ask. When did following another’s aid become sacrilege to enjoying the game’s journey? Not all players wish to shed blood, time, and frustration in a pursuit meant to be joyful. The world is scary enough. For those seeking dark brutality, I shout: “Abandon hope, all ye who enter here!”

To others: Riches await. So open the door slowly. Take a peak. What’s inside may surprise you.