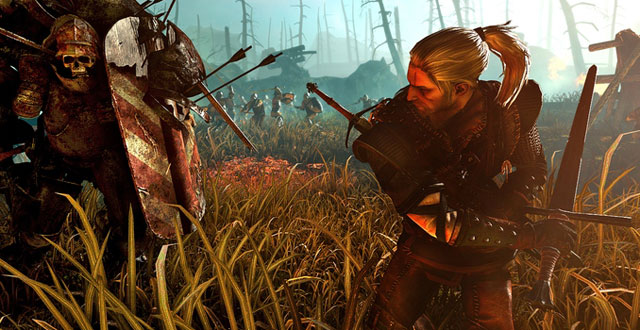 Title:
The Witcher 2: Assassins of Kings

In many role-playing games a king is just a high-level version of a common creature, or a glorified quest dispenser. Not so the sovereigns of The Witcher 2: Assassins of Kings. They are suffused with every bit of the sense of entitlement that comes from being genuinely entitled. As a Witcher—a solver of problems supernatural—the protagonist, Geralt of Rivia, has dealt with many monsters. But the ones wearing crowns are out of his league.

All the monarchs Geralt meets are prone to the kind of big thinking in which little lives are lost. Each king, prince, or pretender in this game—Foltest the Sister-Fucker; Henselt the Last Unicorn; Saskia the Dragonslayer; Prince Stennis of Aedirn; Radovid the Stern—is their own special kind of bonkers, and a focal point for the hopes and nightmares of an entire nation. The Witcher 2 staggers the introduction of these potentates for effect. Where Act I’s border town suffers under the heel of a nasty constable, Act II features contending armies. Geralt’s bright enough to note how far the stakes have been raised: “Killing the commander of a forgotten outpost is not the same as killing a King … even if both are murderers and rapists.” This deft pacing means that when the titular assassins get to work, there’s a definite sense of scale and import to their regicidal activities.

Given that The Witcher 2 deals with competing historical claims—and that Saskia, “The Virgin of Aedirn,” has more than a little in common with Joan of Arc—Shakespeare’s Henry VI, Part I comes to mind as a narrative touchstone. Overall, though, the best line for summing up The Witcher 2 comes from Henry V: “Every subject’s duty is the king’s; but every subject’s soul is his own.”

Consider two characters: the renegade elf Iorveth and the enforcer Vernon Roche. The former wages a hopeless guerrilla war against human oppression of elves and dwarves. The latter has often meted out said oppression in his role as secret policeman. Act II of the game involves a branching path; Geralt must choose to ally with one of these men. Each leads to completely different adventures. Ruthless, uncompromising, grizzled veterans (and victims) of low-intensity warfare—in many ways Iorveth and Roche are the same person, the same soul. It’s duty that puts them on opposing trajectories. One’s previously aimless existence has been caught up in a cause that gives it sudden meaning; the other has devoted his life to something that has been torn from him. Imagine Iorveth’s Path and Roche’s Path creating a kind of interference pattern, and that’s what The Witcher 2 is “about.” Play it twice.

Presumably those familiar with the literary works of Andrzej Sapkowski, on which the Witcher games are based, will be nodding along as the game introduces new events, characters, and places. Everyone else risks losing track of what’s going on. It helps that Geralt is—wait for it!—an amnesiac with a mysterious past; and so characters often have to bring him up to speed. Exposition can be excruciating, but a lively script and engaging voice actors save the day. The problem isn’t in how background is conveyed, but that there are several novels’ worth of it. A journal system helps to keep track of information, but it can’t be accessed when your character is being prompted to make a decision. In The Witcher 2 choices count! Decisions are weighty! Words must be chosen with care! So … who is this guy I’m speaking to, again?

Imagine Iorveth’s Path and Roche’s Path creating a kind of interference pattern, and that’s what The Witcher 2 is “about.” Play it twice.

Daunting though it may be, the game’s political complexity is emblematic at a narrative level of what developer CD Projekt RED has done exceptionally well in general: evocative detail. The artistry of The Witcher 2’s character, art, and sound designs make it possible to pause, look, and listen—to feel a whole feudal mode of life expand around you.

Wander down an alley and see a butcher at work, a peasant washing clothes at the river, or someone brewing up stew. Listen to several species of bird in the forest, ambient chatter in town, or the howling of the wind through mountainous terrain. Mingle with townsfolk of many different body types, classes, ages, attires, and attitudes. Examine objects and architectures beautifully realized down to the grain in wood and the stitching between materials. Of course there are recycled assets and clipping issues and fabrics that flow like sheets of corrugated iron; but the overall stylistic unity of The Witcher 2’s aesthetic transcends these quibbles. Aesthetically, the game is a hell of an achievement. What do you get for the Video Card With It All in an age of console-to-PC ports? The Witcher 2: Assassins of Kings.

That said, the granularity that emerges in the course of play is all the more jarring precisely because the world seems so sensually coherent and continuous. Cut scenes and mini-games occur abruptly; doors and ledges are an inordinate hassle; non-player characters sometimes seem oblivious or blasé about matters that pressingly concern them; environments offer expansive prospects when in fact they turn out to be tangled paths. The vividly designed objects lose their luster just as you lay claim to them, boiled down within a homogenizing and poorly organized inventory system.

Geralt earns his living through combat, and so the game really ought to do a better job with it. The Witcher can specialize in swordplay, magic, or alchemy skill trees. This hints at a depth to gameplay that doesn’t quite pan out. One magic ability in particular makes the whole game a cakewalk, and there’s no real reason not to use it all the time (although it has been toned down in a recent patch).

The most intriguing path is alchemy, which enables Geralt to use herbs and horrible monster bits to brew potions, bombs, and traps. Alchemical preparation suffers, however, from extended contact with the aforementioned inventory screens. Worse, the finesse of the alchemy system is a bit wasted when the vast majority of enemies are recycled models with repetitive, simplistic behaviors. There’s little point in cunning when a monster tends to arbitrarily despawn before it reaches your carefully laid trap. Sadly this is no Monster Hunter. While the creature design is always of high quality, too often what looks like an eldritch beast feels like a speed hump. It’s just a shame that the detail evident in the visuals doesn’t apply to the ecology.

In some ways it is appropriate that monster hunting recedes from prominence. The Witcher 2: Assassins of Kings is superb when dealing with the monstrosity of the state, the madness of crowns. But this means that Geralt is a bit of an odd fit for the story. The fact that he can plausibly side with either Iorveth or Roche shows that no bonds of duty link him to any of the warring factions. Geralt’s problem isn’t the part of him that might belong to any king or country, but that which should be his own—his soul. Without memories, he does not know what kind of man he is. Let’s hope the next game gives us the chance to find out.