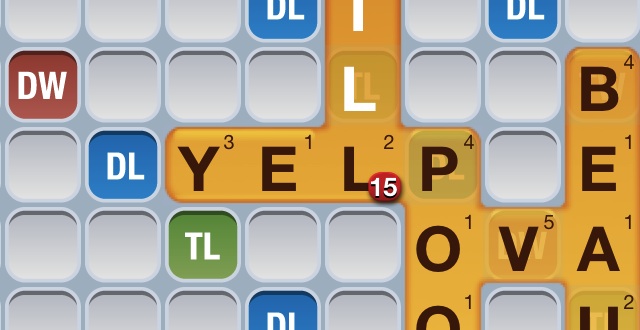 My ex-girlfriend and I played a lot of Words With Friends when we were dating. She beat my ass every single time. But here’s the thing. If we’d ever played a game of Scrabble, I’m sure I would have at least not lost by several hundred points. Because Words With Friends rewards having the tenacity of a cockroach, and it does not reward having a large vocabulary. I am not saying my ex is a cockroach. She is very nice.

What makes Words With Friends expressly different from Scrabble is that the former allows you to throw up as many combinations of letters as you can think up, whereas in Scrabble you can challenge your opponents and let Noah Webster tell you whether or not “kex” and “coled” and “rand” are words; and if they’re not, you get penalized. And the Words internal dictionary is the most infuriatingly accepting dictionary in the entire universe. The basic rule of Scrabble is that if you’re trying to play a word that seems fishy, you probably shouldn’t actually be playing that word, because your opponent might challenge you. If you’re not certain it’s a word, then you essentially have a 50/50 chance of having your turn penalized. With Words, meanwhile, you’re just slinging shit at a wall and seeing what sticks.

Here’s another differentiating factor: The Words board is slightly different from a Scrabble board. I’m 80-percent certain that Zynga With Friends (formerly Newtoy) did this because it keeps them from having the Scrabble people sue the pants off of them for stealing their game. But it also creates interesting new loopholes that let you play the Words board to your strategic advantage. It’s been heretofore established that in Words your actual ability to compose words is less important than in actual Scrabble (and it’s completely negated if you’re one of those guileless souls who isn’t above visiting one of the many anagram generators on the ’net), so savvy tile placement often determines who goes home happy. Your general offensive tactic should be similar to that of the coach of a high-level soccer game: force everything to the outside as soon as possible. Then, you need to trick your opponent to play a word on the Double Word square located one row of squares inside the board, so that they set you up to hit paydirt on a Triple Word square. In fact, that’s the main strategy: Never let your opponent play off the Triple Word squares.

You’re just slinging shit at a wall and seeing what sticks.

But there’s another mitigating factor to the game that people tend to completely forget. When you’re on your iPhone, and your opponent is on their iPhone, the flow of a conventional Scrabble game is interrupted. When you play Scrabble, there’s a socially acceptable time limit between moves, before your opponent gets annoyed and doesn’t want to be your friend anymore. For the sake of argument, let’s say this time is about three and a half minutes. Meanwhile, you can take three and a half days between your moves in Words if you want. This has two ramifications. One, you tend to just play off of whatever word your opponent just played, because you’ve probably lost sight of your overarching strategy, and the game highlights the most recent word played. Two, you tend to play really, really long words, because you can take as much time to think about your letters as possible. This effective lack of a play clock completely changes the nature of the game. And that, (words with) friends, is why Zynga With Friends has made a broken game.

Oh, and I technically won the last game of Words With Friends my ex and I ever played. She resigned.