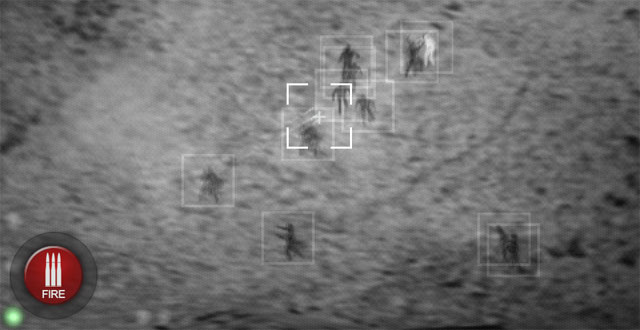 Like most American children, I first encountered war on television. In early 1991, while winter raged outside, I sat transfixed by the nightly news while Peter Jennings or Dan Rather narrated the latest footage of Patriot missiles intercepting Saddam’s Scuds mid-flight. The war came to our 19-inch set in real-time. Through the telescopic lenses of the big three networks I learned that war had a green tint. That grainy night-vision feed, peppered with silent flashes of streaking fighter jets and exploding anti-aircraft rounds: this was war. This was reality. And reality looked like a really cool videogame.

Of course, I didn’t realize how sanitized this “reality” was. The military had learned at least one lesson from Vietnam: never let the media get a close-up, unsupervised view of the action. At the time, I didn’t wonder why TV never showed images of Iraqi children disfigured by bombs or the smoldering corpses of Republican Guardsmen littering the Highway of Death. Every angle was a long shot, far removed from the specks on the ground. Combat was prosecuted from a safe distance, with superior technology and overwhelming force. Defeat was a laughable proposition. We would blow up the enemy’s tanks, snipe his rockets out of the air, and free the poor people of this desert land. And no good guys—or civilians—would get hurt.

If the intervening 20 years hadn’t shattered that naïveté, last year’s WikiLeaks scandal certainly would have. In April 2010 the organization released a video it called “Collateral Murder.” The black-and-white footage, taken from the camera on the gunsight of a U.S. Army Apache helicopter, depicted three July 2007 airstrikes on suspected insurgents in Baghdad. The attacks killed several men, including two Reuters war correspondents whose cameras were mistaken for weapons. Two Iraqi children in a nearby minivan suffered lacerations and puncture wounds from shrapnel.

Controversy erupted not only over the attacks’ dubious legality—it was unclear if the Apaches had violated the U.S. Rules of Engagement, or if they had legitimately engaged the combatants who had been firing on them earlier that very day—but also over the soldiers’ audio chatter, subtitled in the WikiLeaks video. Their seemingly cavalier attitude toward their grim task (“Oh yeah, look at those dead bastards”) threw into stark relief what The New Yorker called “the ambiguities and cruelties of modern warfare.”

So it seems quite a stretch to claim that an iOS game with a silly title like Zombie Gunship could capture the average American viewer’s experience of modern warfare as resonantly as, well, Modern Warfare. But it just might.

Zombie Gunship’s interface is its first salvo. Modern Warfare 2 veterans will instantly recognize the familiar vantage point: as the gunner on the titular AC-130, you view the desert landscape from above through a grayscale gun-mounted camera. The view is nearly identical to that of the AC-130 sections in the blockbuster’s SpecOps mode, even down to the caliber of the guns and the military acronyms topping the screen. In both games, switching weapons changes the zoom level; radio chatter from HQ occasionally comments on the action; and vaguely human figures outlined in targeting squares scurry below. To say the interface is an homage is probably an understatement.

Civilians find ways to make it easy for you to kill them.

Your mission is twofold. As your aircraft circles a military bunker built into the side of a hill, you need to prevent the approaching zombies—stumbling black stick figures with arms outstretched—from advancing into the base. You also need to protect the civilians—slightly more agile white figures—as they frantically run toward the safety of the bunker. If a zombie penetrates the safe zone (designated, like the U.S. military’s fortified Baghdad HQ, in green), it’s game over. Interestingly, you never die: you simply return to base. The gunner behind the camera feed is still far from danger.

Zombie Gunship’s formula is familiar. It’s only a matter of time before your base is overrun; the objective is to rack up as many kills and save as many civilians as possible before your inevitable defeat. Zombies appear from the edges of the map with increasing frequency the longer your mission goes on; survive long enough, and hulking monsters resembling the Tanks from Left 4 Dead will begin to appear among the hordes. Kills earn you coins, which can be used between sessions to upgrade your three guns and other abilities like radar range. As in other great mobile games, the repetitiveness of Zombie Gunship becomes a draw. The satisfaction of leveling up and beating your friends’ scores often outweighs the tedium of replaying the same hopeless mission on the same map.

It’s not just zombies you have to worry about. Killing three civilians ends your game. “You’re doing more harm than good,” HQ comments as the screen goes dark. Simple tactics present themselves early on: zoom in with the 25mm Gatling gun to avoid killing civilians with splash damage; save your single-shot 105mm Howitzer blasts for large clusters of zombies. Still, it’s easy to rack up collateral casualties. Civilians tend to get caught up in crowds of zombies, making it impossible to distinguish friend from foe. If a civilian is attacked by a zombie, he’ll fight it off for a few seconds, giving you a chance to snipe the enemy with some Gatling fire. But more often than not, you’ll end up obliterating both figures, a tangle of black and white limbs pirouetting across your scope. Civilians find ways to make it easy for you to kill them.

Yet this behavior doesn’t feel like a bug. It’s not an artificial inflation of difficulty. You quickly intuit that it’s more prudent to let civilians fend for themselves—to be killed by zombies, even—than to risk trying to save them with a well-placed burst of gunfire. You start your game wanting to save civilians, to come to their rescue, but you soon grow to resent them. They complicate things. They become indistinguishable from the enemy. After a while I was amazed, and a little disgusted, how easily my reaction to killing a civilian had devolved from “my fault, bad shot” to “what’s the matter with him, running into my bullets like that?” I felt myself getting angry at civilians, holding them responsible for their own deaths, even though those deaths came at my hands.

The impossible mandate to kill an enemy who hides among innocents, who preys on your savior impulse, your paranoia, your exhaustion: this is modern warfare.

And that was the moment when Zombie Gunship ceased to be a light, clever twist on tower defense. It began to feel like something designed to get under my skin. It began to feel like September 12th, the unwinnable newsgame in which the collateral damage of your missile strikes on terrorists converts bereaved civilians into new terrorists. Zombie Gunship became not about leveling up, getting a high score, or even defending my base, but about preventing “collateral murder.” And it seemed to be saying that was an impossible task.

Watching the “Collateral Murder” video, riding along with the Apache crew as the scurrying figures on the street collapse in a hail of gunfire, it’s hard to help feeling complicit in the act. The first-person view from the grainy camera feed puts the viewer right in the gunner’s seat, embedding him in a combat action in a way not seen since Vietnam. The difficulty of discerning insurgent from civilian, bad guy from good guy, becomes palpable. The impossible mandate to kill an enemy who hides among innocents, who preys on your savior impulse, your paranoia, your exhaustion: this is modern warfare.

I’m not sure if Limbic Software intended its zombie game to be a commentary on “the ambiguities and cruelties of modern warfare.” You can have a lot of fun with Zombie Gunship without ever considering that interpretation. But circling my desert outpost, training my blurry camera feed on the implacable, inscrutable enemy below, I wonder if this is what if feels like to operate a Predator drone. The person behind the camera feed has a lonely job.