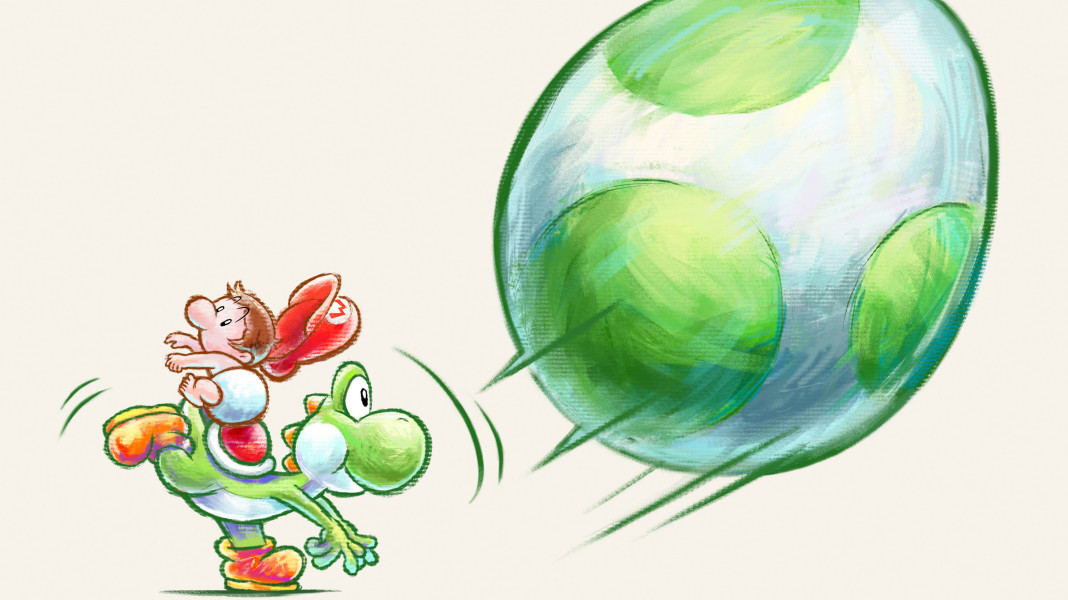 Two hundred million years ago, dinosaurs roamed the Earth, reigning for roughly 135 million years. Evolutionary theories put the earliest humans existing as little as 200,000 years into the past. Comparatively, dinosaurs have taken up 3% of the 4.5 billion years of the Earth’s existence to humans’ theoretical .00004%. No wonder we love Yoshi.

Super Mario World 2: Yoshi’s Island, the successor to Super Mario World, is soon getting a spiritual successor, Yoshi’s New Island. While this is ostensibly a shining moment for Mario’s prehistoric sidekick, it’s worth remembering the original game, which remains one of Mario’s leftfield triumphs.

In 1995, Nintendo was hard at work preparing their new 64-bit, multi-colored console for launch. And so Yoshi’s Island, which was released that year, was arguably intended as the Super Nintendo’s swan song. Once Super Mario 64 introduced another dimension to videogames, game design shifted focus, eager to explore this brave new world of frustrating camera angles.

It would be a decade before New Super Mario Bros. went old school again. Cartridges like Yoshi’s Island were left to fossilize in the dust, only remembered by a techno-paleontological cult few.

A few subtle twists made the game radically different from its predecessors, even if the base actions of running and jumping remained constant. Yoshi’s Island was the ultimate escort mission; colorful dinosaurs were tasked with reuniting baby Mario with his twin brother via mass Yoshi relay. Witchy adversaries, in light of thwarting the twins’ reuniting, made the island inhabitants dangerous and daunting, and you, one Yoshi of an enormous herd, trounce through to the goal points, making eggs to your heart’s content.

Aside from falling or the floor being lava, the Yoshi are essentially invincible. When hit, baby Mario floats away and the countdown begins. You’re left frantically jumping to recollect your cargo like an old slapstick film. Tensions would get high, especially when surrounded by the enemies and hazards that led you to lose the wailing child in the first place. The single player is therefore conscious of two characters versus the traditional one, a wonderfully crafted balance often difficult to manage—see: Brothers.

Colorful crayon-like designs are misleading—this game is tougher than you might remember, especially if you’re concerned with obtaining every flower, star, and coin within each level. The game will penalize you for being hit, but it won’t always “kill you,” leading to further frustrate the perfectionist. In the second world, enemies are already introduced that bat and throw eggs back to you, overwhelming the player into a tizzy of collecting, avoiding, throwing, hopping, and going hysterical.

This world of Yoshi is almost Oz-like, inviting the player to participate in the strange dreamscapes of counterintuitive devices. While all Mario games are surreal Yoshi’s Island, from its very title on down, held together as a distinct, bizarre place full of distinctly bizarre threats. One enemy makes your Yoshi bug-eyed and dizzy upon contact, making the first direct reference to a psychedelic state in a universe with magic mushrooms. Also, what is a baseball player doing on a dinosaur island? What’s the origin of the strange contraptions that turn Yoshi into biosynthetic helicopters, trains, and drills? What populated the island before the Yoshi? Was the species created and cloned by a technologically superior civilization that since disappeared without a trace?

Ultimately, Yoshi’s Island was Nintendo in its most succinct form, building slightly different experiences on top of a classic platformer to create a new whole. Clever, charming, and just a little bit ridiculous, the game proved that taking a risks yielded greater rewards—especially if, like Nintendo, you have the chops to pull off all those risks perfectly.

On one hand, Nintendo is correct to be shamelessly re-tracing classic SNES franchises like Donkey Kong Country, Zelda, and Yoshi’s Island. They’re rightly beloved. A Link Between Worlds retraces A Link to the Past’s map to near exactitude, and while mechanics and progression are its own, it often feels like you’re playing in another game’s shadow. I’d rather play Donkey Kong: Jungle Beat than Donkey Kong Country Returns, because I’ve essentially already played the latter three times over.

Whether or not these revisits become new classics is up to those people who are playing them for the first time. Will people stop playing, say, Titanfall long enough to visit this strange Island? Regardless, Yoshi’s New Island has some enormous orangey shoes to fill.