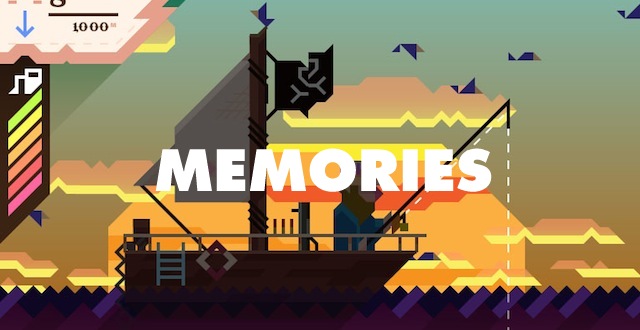 It’s never a good idea to have too many cooks in the kitchen. Just ask the Miami Heat, or the Wu-Tang Clan. Okay, admittedly, those two examples make it sound perfectly rad. In fact, so does Ridiculous Fishing. When four superstar indies came together to turn a primitive PC game about shooting fish with shotguns and uzis (Radical Fishing) into an iPhone extravaganza, the results were predictable. They won an Independent Game Festival nomination. The team is made up of figures who were instrumental in portable hotness like Bit Pilot (Zach Gage), Super Crate Box (Vlambeer), and Solipskier (Greg Wohlwend). What follows is an oral history, in which the crew explains how Ridiculous Fishing got started, and why fishing is so…ridiculous.

Greg Wohlwend (artist): I was pretty reluctant to take it on.

Eirik: I could have gone out and shot some fish or something.

Greg: Who knows about those Vlambeer hoodlums.

“I could have gone out and shot some fish or something.”

Our crapulent captain sails the globe, recruiting his crew.

Brandon Boyer (Independent Games Festival chairman): I first saw Radical Fishing on a trip through the Netherlands around the end of 2010. I was exhausted, hungover, and couldn’t do much more than stay collapsed on an oversized beanbag chair while Rami and J.W. brought me beers and snacks and gave me a whirlwind tour through a collection of prototypes and ultimately abandoned projects collected on Rami’s laptop.

Zach: My friend Brandon Boyer turned me on to their stuff. One day he was hanging out in New York. He was trying to get Vlambeer to do a port of Radical Fishing, which I loved.

Brandon: One bleary-eyed, hung-over morning, Zach came out of his bedroom just to say that he’d been playing Radical Fishing for the past hour and to agree with a drunken rant of mine from the night before about how intensely elegant and beautifully designed it was.

Greg: [In San Fransisco last year], a bunch of designers were hanging out in their hotel room to jam. I headed over because I was tired of the conference and wanted to create something. Everyone mostly hung out and spouted playful insults. All the while, Rami and J.W. were talking about meeting up with Zach, and I had no idea why.

Jan Willem Nijman, a.k.a. J.W. (designer): I started telling Zach something along the lines of “We have this really weird, horrible fishing g–” and he interrupted me, shouting, “No, man! Radical Fishing is insanely cool!”

The crew tries to convince J.W. the boat won’t sink.

Brandon: J.W. introduced Radical Fishing to me with the caveat that he actually thought it was sort of a failed experiment and was basically no good. I clicked the touchpad button to cast the first line and couldn’t stop playing for another 45 minutes, suddenly tuning out everything else.

Greg: I really dug what J.W. did with Radical Fishing and how irreverently charming the pixel art was. I don’t think he gives himself enough credit.

Brandon: YES, THAT NEEDS TO HAPPEN STRAIGHT AWAY.

Greg: I gave them a “Well, I hope I come up with something cool. We’ll see.” kind of answer.

On the water, a fight breaks out over who gets to turn the captain’s wheel.

Rami Ismail (programmer): Basically, J.W. made a full blown prototype (with horrible code, I might add), and I made the game out of it.

Zach: I’m the one programming the thing.

Rami: I did the programming for the game.

Greg: Zach has been sick with a nasty flu bug since he got back from Italy.

J.W.: We both don’t have enough free time to play this game at a competitive level, but definitely I’m better [than Rami].

Rami: J.W. can be a bit delusional at times.

Meanwhile, the crew cooks up elaborate big fish stories to impress those back home.

Greg: The colors and feel of the game was a matter of making a ton of objects and fish and tweaking the colors until I felt that warm nostalgia.

Brandon: The one-two-three punch is so incredibly satisfying as a game loop. It triggers entirely different parts of your brain. Each is tuned so beautifully that it’d be every bit as engaging with no fishing at all.

Zach: [We] shoved as much love and craft into it as possible.

I just decided to sit down and fuck around and see what came out.

At last, the truth surfaces.

J.W.: I scribbled down the game design in the thirty minutes after seeing a documentary about tuna fishing.

Greg: I just decided to sit down and fuck around and see what came out.

Eirik: [I] simply put my brain in auto-mode and let whatever comes out be the score.

J.W.: The rest of my work was doing art in Microsoft Paint.

Brandon: They didn’t really have the bandwidth to do it themselves.

After their catch, the old vets counsel younger generations on how to reel in the big ones.

Brandon: The two best things you can do to break into the industry are start smoking and start drinking heavily.

Greg: When I’m cooking, I often make the best stuff when I only have some butter, black beans, and a can of tomatoes.

Zach: Keep making things until you make something that you love and is perfect, which should never happen.

Greg: I’m really stubborn. I will believe in a system so completely that I spend entire days throwing ideas at it, and when something does come back, it almost feels like discovering something I would have never dreamt of.

They fondly remember the excitement of catching a prize fish.

Rami: We absolutely did not see it coming. The previous year, we had been refreshing the page every minute. This year we knew the nominations were being announced and thought we’d check.

Brandon: The rest is beautiful history.

Rami:  I hugged everyone nearby and called my family to let them know. My mother burst into tears.