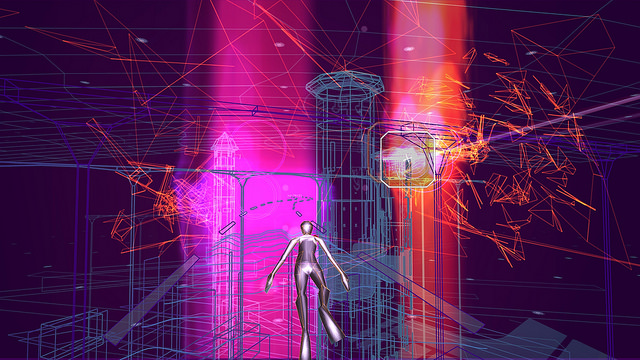 Despite being a child of ’90s clubbing and music television, the 2001 rail shooter Rez didn’t quite resonate with its majority audience as its visionary creators had hoped it would. A small niche of players got it—no, they really got it—but it didn’t have the impact of, say, a killer DJ set sending ripples across the dance floor. And make no mistake: that is what director Jun Kobayashi and producer Tetsuya Mizuguchi were hoping for. Kobayashi has explained that the title Rez is a shortened form of “resolute,” which may be a Japanese-English misappropriation, but the important part is that he understands it to mean “the moment when sound and visuals are totally synchronized.” And not just synchronized with each other; synchronized with your own body and mind, too.

There are many reasons for Rez not being appreciated as widely as it perhaps should have been back in 2001 and it’s something that Mizuguchi has pondered lately due to the announcement of Rez Infinite for PlayStation 4 and PlayStation VR. “Rez was released at a time when most home console games were played on small 4:3 ratio tube TVs, with fuzzy pictures and sound that was barely stereo,” he says. The technology that was most widely available at the time was not primed to deliver Rez in its intended form. But it’s possible that Rez wasn’t only let down by technology but also by the collective player conscience at the time. It’s only in the last decade that euphoric musical experiences have become more widely understood with titles like Dyad, Audiosurf, and Mizuguchi’s own Child of Eden.

With advancements in both areas of those previous failings, Mizuguchi is hoping that the world is now ready for Rez, and he’s banking on achieving total synaesthesia with Rez Infinite. Mizuguchi notes in the game’s announcement that, finally, the Rez experience can now be realized in full 1080p HD and 60 frames-per-second (120 frames-per-second in virtual reality), but he adds that none of these numbers truly matter. “The only thing important about that technology for Rez Infinite is how it makes you feel; hopefully, it makes it easier to forget the fact that you’re sitting in front of a TV playing a game, and instead lets the real world melt away into a swirl of incredible sights and sounds that could only ever exist in your imagination,” he says.

Unfortunately, the Synesthesia Suit isn’t widely available. In fact, there’s only one of them in the world. How it works hasn’t been divulged but given that the person wearing it in that photo is covered in various colored lights that are visibly struck with movement, and Mizuguchi emphasizing that it helps you to “feel” the game, I’m guessing that it stimulates various muscles as you play. Importantly, it also makes for an entertaining human light show for those queued up waiting to play at whatever event it may appear at.

Find out more about Rez Infinite in its announcement post.