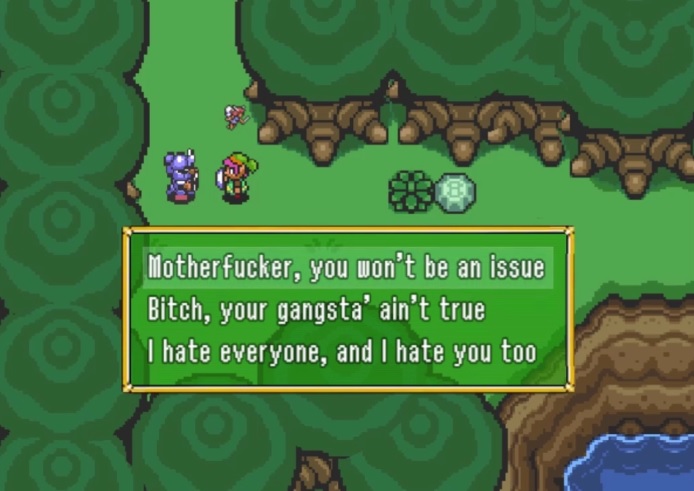 I’ll cut to the chase: someone gave Link a voice. As everyone’s favorite silent protagonist for 30 years and counting(!), you’d think that Link might have some sophisticated musings on his experiences. As it turns out, he’s got something even better: the power of rhymes.

The Legend of Zelda: The Hero of Rhyme is a surprisingly accurate browser-based game that replaces all of the combat of the RPG classic with rap battles. Good rap battles. Like any other Zelda game, there’s winding forests, temples, and an inevitable face-off with Ganon. Na’vi is your more eloquent, still annoying fairy god-rapper. However, unlike the original series, you now need 500 “rap points” to top Ganon’s god-tier bars. You’ll regret challenging him too early—the game lacks a save function. One shot, one opportunity.

flow that would make Drake quiver in his Timbs

Despite the absence of Zelda’s trademark sword-spinning and pot smashing, the game is still just as satisfying to navigate, as totally unique rhyming showdowns wait around every corner.

Newgrounds user Deklaration posted the game in late August to warm reviews, and the game has since developed a small cult following, some users already requesting a sequel. Somehow, The Hero of Rhyme doesn’t completely undermine Link’s heroism—it almost makes sense that Hyrule’s most powerful warrior would also have flow that would make Drake quiver in his Timbs. After 30 years of kicking Ganon’s ass, it’s about time there was a new way to save the world.

Drop sick Hylian bars for yourself in your browser.