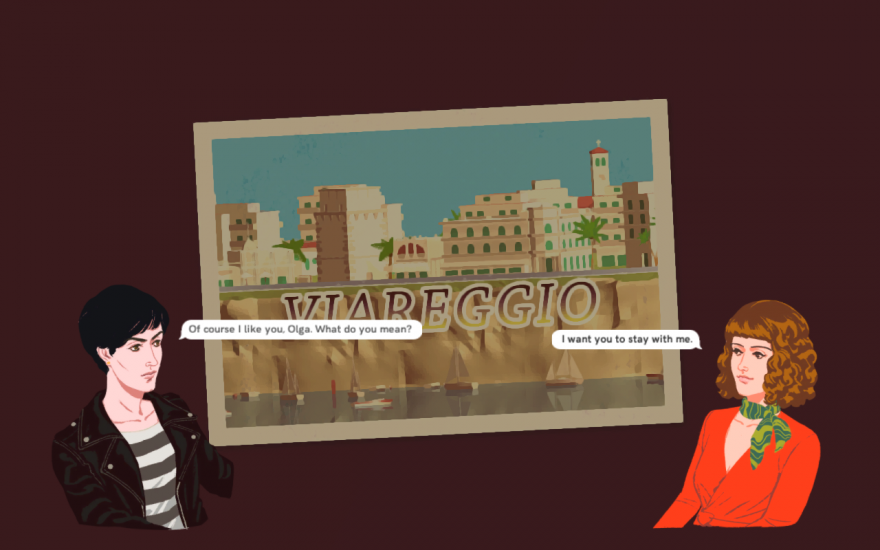 More than just an escape, the quintessential road trip both captures and distills a moment in time. The car’s make, model, and condition—all of it tells the story of not only an era, but its owner and the life that brought them to this long stretch of pavement. Maybe you’re riding a VW Camper full of ash stains and pilling carpets. Or, it could be a Ford Sierra, still carrying the faint scent of your mom’s perfume. Perhaps your road trip vehicle is actually more like a getaway car: a beautiful, vintage Mercedes that’s one rich girl’s ticket out of her messed up family.

Wheels of Aurelia, a beta featured in the first wave line-up for the Fantastic Arcade happening now in Austin Texas, puts the player in the driver’s seat of a girl named Lella’s road trip. As she and her friend Olga run from their obligations, their conversations highlight the social changes taking place in Italy during the early seventies. As the girls make their way through Via Aurelia, a famous stretch of Italian coast on their way to cross the border into France, you feel as though they’re not only saying goodbye to the more stifled life they knew before, but also welcoming an era of post-war second wave feminism where women demanded more from life.

Since Wheels of Aurelia is half a racing game, half an interactive fiction, it gives the player with different literal and narrative paths which lead them to different endings. By combining the starkly different genre of games, creators Santa Ragione (the same team behind FOTONICA) created something entirely different as a whole—though not always a better game for it. Having to pick dialogue choices during races and chases results in a type of gameplay I would be describe as a texting-while-driving simulator. As you try to juggle both, you can never fully commit to one, rendering your road trip more frantic than monotonously relaxing like it’s supposed to be.

But what the game lacks in mechanics it more than makes up for as an interactive fiction filled to the brim with mod-ish, 70s, post-Breakfast at Tiffany‘s banter. The two main characters, Lella and Olga, have the option to pick up a plethora of hitchhiking characters along the way, including a priest and an over-eager street car racer. At the core of our story are the two girls and their burgeoning relationship to each other and the rest of the world as it evolves.

Wheels of Aurelia can be downloaded as part of the Fantastic Arcade Humble Bundle on Mac and PC. Or, if you’re in Austin, be sure to check it out in the flesh. Finally, be sure to vote for the game of Steam Greenlight.