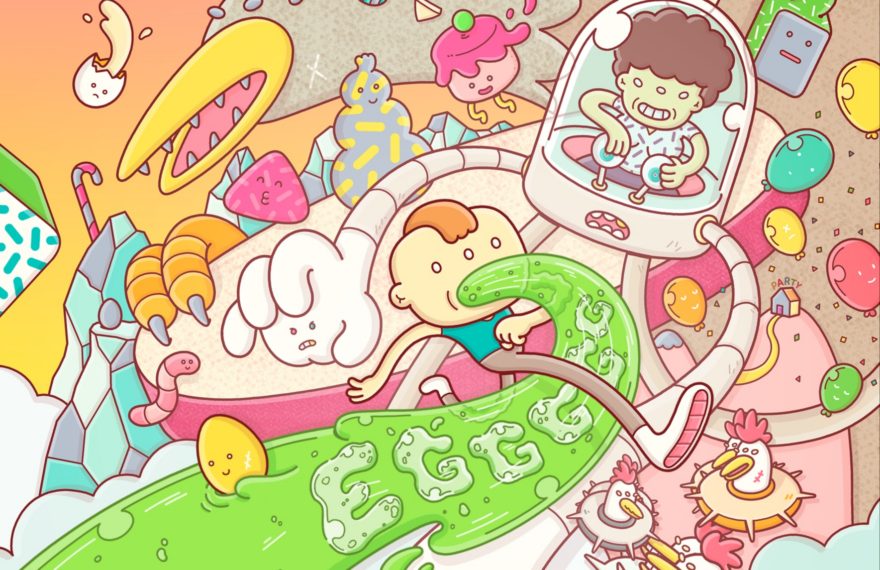 There’s a gigantic chicken chasing after Gilbert. In any other videogame, this would seem out of place, but not in the upcoming platformer Eggggg, where absurdity rules. The chicken is just one of the many ridiculous elements featured in the game. Did I mention Gilbert also does a lot of puking? Yes, you read that right. This game is about a boy puking his way through life while collecting eggs and running past deadly chickens.

Eggggg is being put together by Norway-based studio Hyper Games. Loosely based off the film Gilbert’s Grusomme Hevn (Gilbert’s Cruel Revenge), the film and the game explores Gilbert’s life and his allergy to eggs. Initially, the game was broad in nature with Hyper Games wanting to create a game about allergies and their effects (including sneezing, puking, or blowing up). Soon after starting on the project though, puking stood out as the most absurd and versatile action they could make players do.


Finding more fun in this absurdity, the team shifted the game’s focus solely on this—with Gilbert puking his way through levels (acting as a sort of jet pack propelling him in different directions). The team took it seriously enough that they even experimented and developed a whole host of puking-related actions from wall-jump puking to enemy-blasting puke among many others.

Drawing inspiration from recent Rayman titles to classic games like Super Mario 3 (1988) and Super Mario World (1990), Eggggg imbues a sense of humor under the hood of what could have been a typical platformer, with a character running and jumping through numerous obstacles. That cheeky humor along with the game’s candy-coloured visuals (brought to life by the Spanish-based duo Brosmind) turn Eggggg into a total mishmash of utter ridiculousness and cuteness.

“that’s funny because that will make him vomit”

Speaking with Hyper Games founder Are Sundnes, I couldn’t help but ask about the gigantic chicken. He tells me it came out of necessity because they needed Gilbert to run constantly. A gigantic chicken was the obvious scare tactic. “If [Gilbert] is allergic to eggs and he falls inside a giant egg, that’s funny because that will make him vomit. And, of course there will be an angry chicken there [running after him],” says Sundnes chuckling.

After playing the demo and seeing an endless stream of (very cute) puke, I ask Sundnes if the team had any concerns about the game becoming too puke-inducing. This, he tells me, was the reason they went for a whimsical art style. It helped to dampen the seemingly “disgusting” nature of the game’s core.