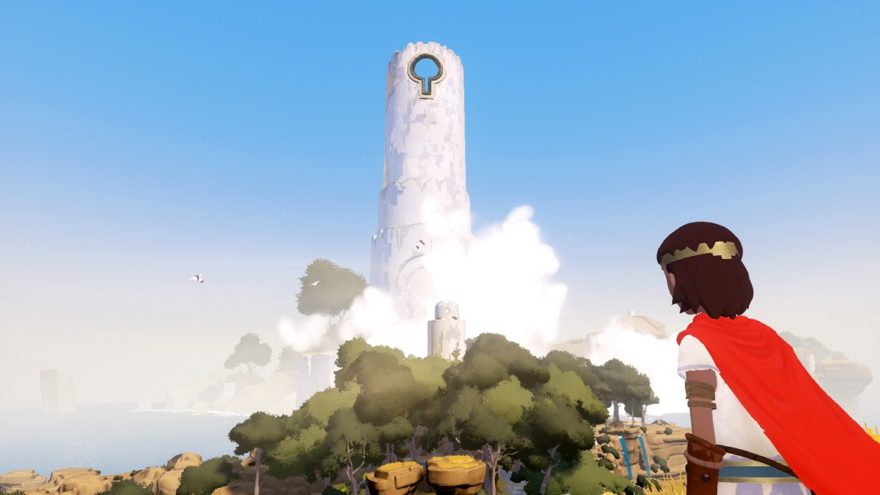 When RiME burst onto our radars with a minute-long trailer back in 2013, it showcased scenes that evoked games like Ico (2001) and The Wind Waker (2002). The camera swooped across a serene Mediterranean island with high walkways and cliff edges to traverse; there was an illusory door that opened into a mountain, where inside dark figures moved towards the protagonist’s campfire; it ended on a huge looming shape, dinosaur in size, moving through the veil of a morning mist.

All of that is present in RiME‘s new trailer but it also moves in closer, finally giving us a proper show of the protagonist’s face, as well as the creatures that he’ll encounter along his journey. Gulls and crabs populate the beach that the young boy washes up on after being shipwrecked. A little later, after passing by a huge tower, he finds a way to free a fox from its stony prison, bringing it back to life. The boy swims among tropical fish, down to the carcass of a shark, he’s chased by a large eagle-like bird, meets a bipedal robot, and also sees mysterious cloaked figures around the island. There are many sights to take in.


We don’t need to guess what is going on this new trailer as Tequila Works, the studio behind the game, has revealed all. Speaking to IGN, the studio explained that the boy has to make use of “light, sound, perspective and even time” to uncover the island’s secrets. He has to deal with the wild creatures and master the crumbling ruins of a long-forgotten civilization that are spread across the terrain.

you should notice details you might not have before

Take a second look at the trailer with this knowledge and you should notice details you might not have before. See how the sun and moon accelerate as he pushes a large circular device. Watch for the light beams being shot through the apertures atop the island’s large towers. And how the sound spirits emitted by crystal balls seem to bring a tree into full blossom.

The other bit of news that has arrived alongside this new trailer is that RiME is now confirmed to be coming out in 2017 for PlayStation 4, Xbox One, PC, and Nintendo Switch. We found out last year that the game dropped its PlayStation 4 exclusivity but this is the first time we’ve heard what other platforms it’s coming to.

You can find out more about RiME on its website.