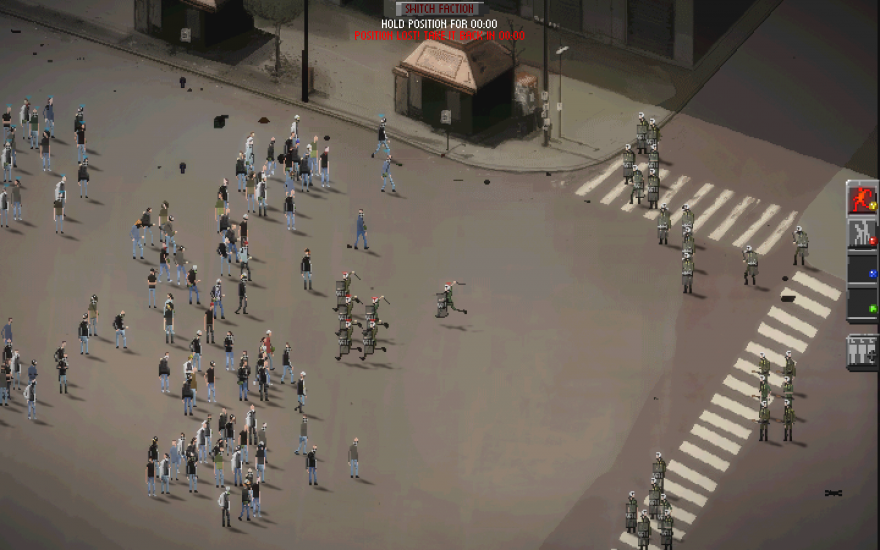 I first covered Riot — Civil Unrest in the midst of the protests in Baltimore over the death of Freddie Gray. It’s always the midst of something. The news cycle leaves injustices behind with alarming regularity, but it never lacks for new sadness to glom on to. There’s no comfort in such predictability, just exhaustion, which is how I came to feel about Riot — Civil Unrest. It captured the sensation that unrest is everywhere. Well, it almost did.

Riot — Civil Unrest’s action will take place in Italy, Greece, Spain, and Egypt, four countries with plenty of strife, but also a world away from the (North) American context in which I approached it. To claim these four episodes are wholly universal is to whitewash the experiences of protestors worldwide, and that is what I fear I did last April. This is no fault of Riot’s developers: There is too much strife in the world for an entire game to be comprehensive. The easiest way to fill that void is by projecting your angst onto a game that has its own specific focus.

Or at least that used to be the case. On Wednesday, MergeGamesLtd announced that a series of new locales would be added to Riot — Civil Unrest as bonuses for completing the existing stages. The list, in its entirety, is comprised of:

Riot — Civil Unrest is still not a game about every protest. It never will be. Nor can we be sure that its mechanics will effectively convey the intricacies of all these new scenarios. Nevertheless, it’s interesting to see Riot expand (within the Northern hemisphere). Its settings may vary, but Riot — Civil Unrest is beginning to suggest that uprising may be a sort of universal language. Its words add up to different meanings—claims, struggles, desires—but they are all reflective of some basic desires. Riot — Civil Unrest may ultimately have less to say about any specific episode than it does with protest as a fundamentally human exercise.