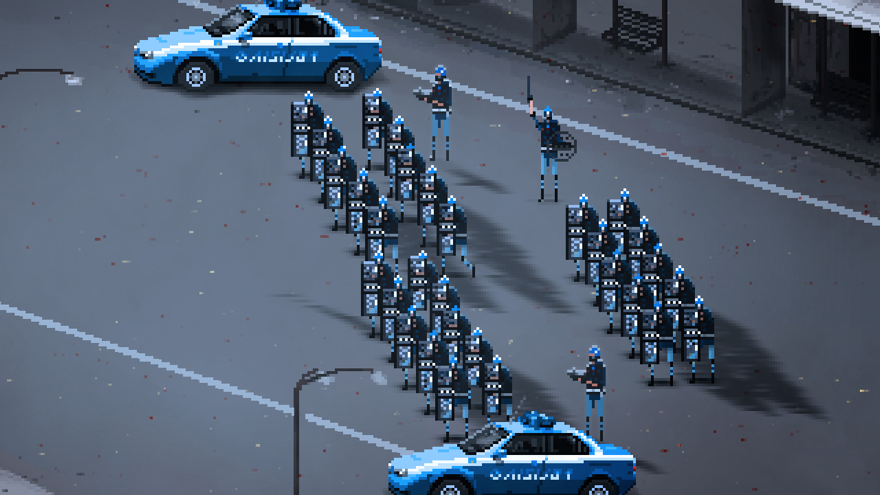 There are sad nights on Twitter, nights where one scene of senseless repression bleeds into the next. There have been plenty of these nights in recent years: Tahrir Square, London, Bahrain, Ferguson. Last night, it was Baltimore. Soon it will be somewhere else. For brief moments, the phenomenon of watching riots feels like an expression of shared humanity: the whole world is witnessing an historic moment. Then reality sets in. You are not the one whose bones are being crushed by a policeman’s truncheon. Tomorrow you will get on with your life. You will move on to the next riot and the next loss of hope.

Four years after the brief promise of Tahrir Square and two years after its development was first announced, Riot — Civil Unrest, a game that promises to “[place] you in some of the world’s most fractious disputes,” has announced that it will be coming to Steam in the summer of 2015. Based on four real moments in recent history—Italy’s No TAV movement, Greece’s Battle of Karetea, Spain’s Indignados movement, and Egypt’s Tahrir Revolution—Riot lets you play as either the police or the crowd. Sadly, these moments, themes, and dilemmas remain relevant.

Indeed, the sorts of confrontations between citizens and agents of the state that Riot—Civil Unrest depicts are so common that it’s hard to believe that rioting is really what’s at issue here. Sure, these confrontations matter—rioting is a loaded term and probably not helpful in this context—but they are just symptoms of larger problems. In that respect, despite its strategy-based gameplay, Riot—Civil Unrest is not really about winning and losing urban wars. It is about structural problems in Italy, Greece, Spain, and Egypt, but, more broadly, it is about structural problems that exist in most nations. America is not named in Riot—Civil Unrest but it would be foolish to believe that the game does not describe its predicament as well. Structural inequality and imbalances of power are prevalent: riots are but a sign of these deeper problems.

Riot – Civil Unrest will be coming to Steam this summer. You can find out more about it on its website.