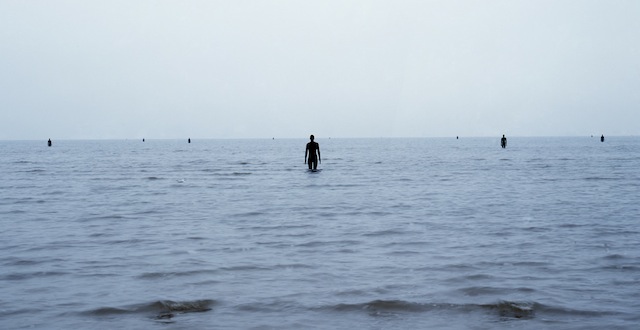 “Our races—united by a history long forgotten and a future we shall face together,” Optimus Prime declares in a husky, dignified voice that rises from the depths of his chassis. The scene comes at the end of Michael Bay’s film Transformers: Revenge of the Fallen, a series about machines that transform into other machines to save Earth from machines that also transform. But these mountainous scraps of steel muscles are not the only ones shapeshifting.

Another memorable moment from Revenge of the Fallen is when a racy blonde changes into a killer robot as metallic coils extend from her mouth and, um, elsewhere. Around Hollywood, stars are making similar superhuman transitions, via the aid of computer graphics. In the biggest blockbusters, the heroes swing through Manhattan high-rises on webs shot from their wrists, summon electricity from the heavens with a hammer, and punch out helicopters with raging green fists. The Schwarzeneggerian action hero, with enough bulk to carry a heavy gun, but not to overturn a city bus, has become insufficient.

With videogames, I have been personally enlisted in the crusade for self-empowerment through machines. Put a controller in my hand and I’m running faster than the speed of light. I’m scurrying up the side of buildings like a crazed squirrel. The problem is, I rarely do my avatar justice. Mario may be the most majestic jumper since Air Jordan, but under my control, his acrobatics are reduced to a series of mistimed leaps and blown landings. Naughty Dog knew I couldn’t somersault well enough to escape a nosediving plane in Uncharted 3: Drake’s Deception, a game referenced by one critic as “the best movie you will ever play,” so I watched and pressed the triangle button when cued.

Thankfully, with the premillennial advent of tool-assisted speedruns, a method of hacking games to produce truly spectacular play, human error is a thing of the past. Exotic videos are created by running console games on a computer, so that special tools can be used to achieve in-game results that look amazing. You might have seen these peculiar videos of classic games on YouTube. And you’ve probably thought, “That’s impossible.” Speedruns show us what it would be like if robots played videogames. They teach us that there are varying degrees of perfection, and that mere mortals are on the short end. These strange captures make good on Optimus Prime’s oath. The machines and humans are united. Together, we can be more than meets the eye.

The levels are not so much played. Rather they are squeezed dry.

For example, take Super Mario World in 09:57.82 by bahamete, Kaizoman666, Mister, and PangaeaPanga, a speedrun that achieves the unthinkable task of beating the famous Super Nintendo game in two ticks under 10 minutes. The levels are not so much played. Rather they are squeezed dry. Every move is performed in the way a calculator does math. But the demand to win as quickly as inhumanly possible also results in the Mushroom Kingdom being bent in unfamiliar ways. A surprising amount of technical expertise is required, as seen in the abuse of strange glitches.

In one instance, Mario gets trapped between two spiked pillars, but instead of taking damage, he scales them with a wall jump, even though the wall-jump move wasn’t introduced to the series until six years later with Super Mario 64. There are times when the player appears to hack the game using simply the run and jump functions. Iggy’s Castle is mysteriously cleared three seconds after it is started. Mario displays uncanny showmanship in the video, bouncing and hopping forward relentlessly. At one point, equipped with the cape, he flies through an entire level—spinning, diving, and passing through solid objects, while mostly facing in the wrong direction—without once touching the ground.

My knee-jerk reaction is one of disbelief—of outrage! How in the world did things come to this? 500 million years ago, primitive fishlike creatures developed fins. Somewhere along the line, we can imagine the event from the film 2001: A Space Odyssey, where an ape discovers that a stick is a good weapon to beat its neighbor with. In the 18th century, the spinning jenny was invented, increasing the amount of yarn a worker could produce eightfold.

A century later, Luddites went to war with the English textile industry, which had put many artisans out of work by adopting power looms. Today, automatic teller machines are on every corner. The postal system is going under. I buy groceries in a checkout line that lacks a cashier. I come home and my cat doesn’t come to see me. He’s busy playing on my iPad. I turn on the computer and see machines playing videogames far better than I could dream of. Where do we go from here?

According to TASVideos, a website where tool-assisted speedrunners gather, the next evolutionary leap is to modern gaming platforms. As for now, tool-assisted speedruns (TAS) are limited to older games. Videos of Nintendo Entertainment System and Sega Genesis games are among the most popular. Over the past few days, I’ve watched the games of my childhood being deconstructed like false premises in a Socratic dialogue. It turns out you do not need a boss key to clear the dungeons in The Legend of Zelda: Majora’s Mask. Sonic can outrun the edge of the screen. And in fact, the point of Tetris isn’t to keep the pieces from stacking up, but to build arabesques with the tiles.

Note that I said the results look amazing. The process of making a speedrun is laborious and dull—about as exciting as watching a team of graphic artists put together an animation of Optimus Prime being thrown across Egypt by Megatron. Joshua Nyer, who posts speedrun videos under the alias Comicalflop, told me that although a run generally lasts from 15 minutes to an hour, creating one takes an incredibly long time. “My Mischief Makers TAS took over a year to make. I restarted from the beginning numerous times. Some people have a knack for working at a faster pace. They may TAS for three hours per day, and finish big projects in one to three months,” he wrote over email.

What happens in the interim? A highly devoted individual hunches over a keyboard and strains his eyes on a computer screen, while entering the same set of commands repeatedly. A very basic run simply exploits save states, a technique that allows a game to be saved and reloaded at any point in time. A runner can replay a segment until he gets it perfect, save the recording, and move on to the next segment. This way, he gradually inches forward through a game. With the assistance of a computer, and a whole lot of free time, he can easily outplay the likes of a professional gamer, even if he has terrible motor skills.

It may sound like overkill, but using exploitative techniques has become the de facto way to do things well. In a talk given recently in San Francisco, sound designer Darren Korb, whose game Bastion is defined by voice work so smooth and casual that it could give Isaac Hayes goosebumps, confessed that the narrator’s nonchalance was the result of a year’s worth of recording the same sound bites over and over. James Silva, the creative mind behind the punk game The Dishwasher: Vampire Smile, told me a similar story. Although he considers his skills on guitar to be amateurish, he laid down killer rifts for the game’s soundtrack by rerecording chords repeatedly.

Human error is a thing of the past.

While videogames often breed obsessive behavior, such tendencies are found all over. The experimental composer Conlon Nancarrow wrote his compositions for player piano, because they were too complex for humans to play. It seems that highly motivated people are always running up against their own limitations. On college campuses, the ADHD treatment Adderall has become a popular smart drug among students looking for an edge. Even in writing this article, I have consumed no less than an energy shot, two cups of coffee, and a bevy of caffeine-laced snacks, including trail mix, spiced nuts, and BBQ kettle-cooked potato chips.

As tool-assisted speedruns show, play brings out a potent desire to be the best. But it also brings out a desire to be transformed into something machine-like. “TAS allows you to go beyond the boundaries of what humans can possibly do,” Nyer said. One method speedrunners rely on to enhance their performance is slow motion. They can advance through a game frame-by-frame, as if they were inspecting a reel of film. It may take 30 frames for Mario to take one step, but they will slow the game down to analyze each one. It is like playing through a microscope. According to Nach, a programmer who developed many of the tools for speedrunning, “You have to be prepared to sit down and spend hours just cutting down some frames.”

Nach explained the finer points of tool-assisted speedruns in an email. He told me that the best players will spend weeks researching—mapping out the most efficient route through the game. They must remain aware of factors such as time, velocity, and their “x/y coordinates.” When that isn’t enough, some resort to hacking the game’s code, writing scripts to automate play, and running a binary search algorithm so that they can learn how to jump more effectively. (At this point, the conversation went over my head.) Not only that, but the TAS community functions as a global think tank. They come together over the internet for the purpose of showing the Nintendo who’s boss once and for all.

Still, the question remains: Why do they do it? What motivates someone to spend months of their life documenting the intricacies of Bubble Man’s stage in Mega Man 2, while working at a snail’s pace, and learning to reengineer hard code along the way? Some like being part of a community. They enjoy the challenge, and find it entertaining—but that can be had anywhere. Others claim speedrunning is an art, but this is like the Transformer Bumblebee saying that changing into a yellow Camaro is art. The truth is, they do it to be superhuman.

“Trust me, the final reward is so worth it,” Nyer confided. Likewise, Nach said his reason is to “defy reality”—to “make the impossible possible.” Perhaps in the service of technology, we could transform from our reactionary barbarism—from relying on our eyes to send a signal to our brain and then on to our hands—into omniscient mega-computers from the future. Then, we may find that, in the words of Nach, the “things we grew up knowing with absolute certainty are simply untrue.”

Later, I watched a tool-assisted speedrun of Mega Man & Bass. The series is about a boy who is turned into a robot to rid the world of evil machines—an unexpectedly fitting allegory for speedrunners. After a moment, I realized the player could do anything he wanted. Mega Man slid quickly across the ceiling in a spasm that resembled a b-boy in a strobe light. For once, I felt bad for the bosses. As he battled a robotic menace wearing a pirate hat, the screen was covered with blocky graphical artifacts. In the next round, Mega Man froze into a cubist statue. He was toying with him.

I thought back to the words of Optimus Prime, leader of the Autobots, an advanced faction of robots who know a thing or two about transforming: Were we so different? They’re a young species. They have much to learn. But I’ve seen goodness in them.