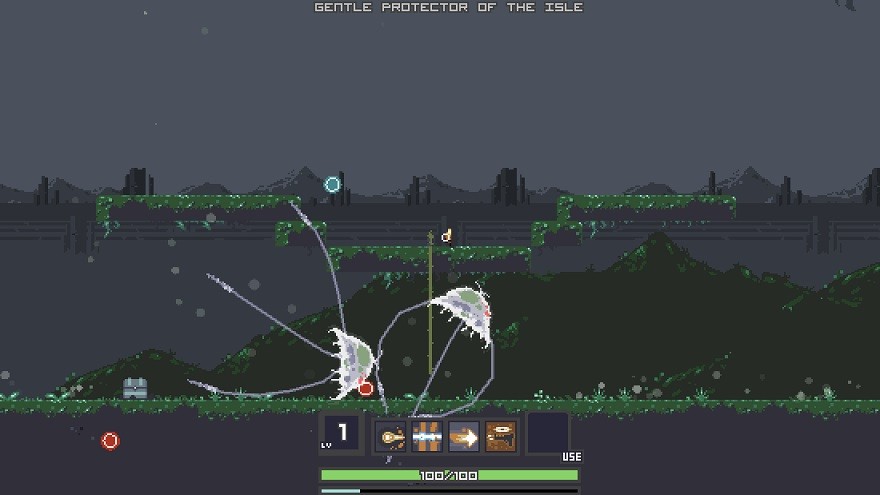 I’ve watched the death of @ symbols and cared. I’ve dreaded the sight of a loyal Dwarf Fortress d caught in a cloud of ASCII miasma, and gotten actually pissed after flying the crabbed c of Geometry Wars 2 into a passing pinwheel. But I didn’t feel anything when I watched my tiny rolling gunners expire in Risk of Rain. They looked little and far off, like messages printed too small to read.

Risk of Rain is called a “roguelike-like” by its creators, but it’s simpler to call it an arcade game. You run, roll, blink, or backflip across long platforms, firing at spongy enemies that pop in around you. If you die, it’s back to stage one (of six). The starry backdrops change, but the levels are mostly the same: the green grass on the platforms turns gray, the ropes become vines or strings of pink slime, but they still look like presets dropped in from a level editor for Lode Runner HD. 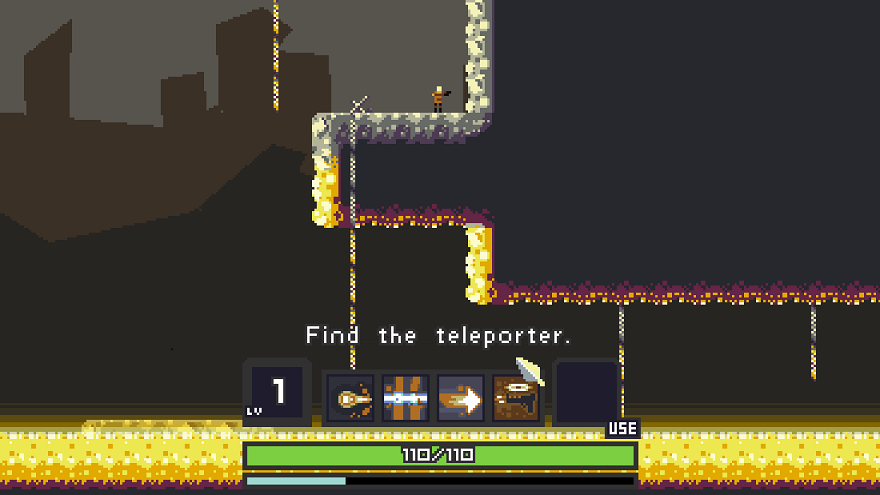 The game rushes you through these monotonous spaces, imposing a timetable that gives enemies more health and damage every few minutes. Trapping players on this difficulty escalator stops them from checking every corner for items, but it feels wearyingly gamey after a few restarts. Most games don’t have a timer at the top of the screen for the same reason they don’t put clocks in casinos. You watch the difficulty thermometer tick up to Very Hard and think, “Did I really sink another 20 minutes into this?”

Pushed toward each level exit, you move forward with no sense of progress.

Pushed toward each level exit, you move forward with no sense of progress. Experience orbs spring from corpses, but do little beyond filling another meter in the cluttered UI. There are no skill or stat choices to make. Money is the only real resource, as it buys helper drones and items, which can do anything from summoning the ghosts of enemies to giving you more health for every kill. Your row of collected items is the spine of each playthrough, but you rely on blind luck to fill it with anything good. You sometimes get to pick either a set item or a random draw, but it’s more common to throw your money away at the random item-dispensing shrines, tubes, and chests that stand like trail markers on the platforms you traverse.

Chance adds spice to an RPG, but choice should be the stock. If you can’t influence your course through the game, you’re just left standing on the escalator, waiting to be taken to the end. Unlike classic roguelikes, Risk of Rain doesn’t give players room to compensate for or take advantage of their luck. Instead, the “roguelike-like” experience defaults to pure action.

But Risk of Rain isn’t up to the standards of the arcade, either. The game is chiefly about kiting trains of enemies across the flats, turning every few steps to fire into the stack. It feels like killing a mountain by shooting all the rocks off it. (The Huntress, who can shoot while running backwards, might be the best for this, but I preferred the chunky crowd control abilities of the Bandit.) When cornered, you roll or hop back through the monster hill and resume leading it in the other direction. There’s no physical contact: the player can bound through enemies like a crowd of ghosts. Most attacks don’t knock you back or elicit any visual feedback beyond a gouge in your health bar. It’s a floaty, indistinct system, overmatched by arcade peers like Spelunky and Joust, which are built on solid knocks, momentum, and chain reactions.

Risk of Rain winds up feeling as insubstantial as its pursuing Wisps and free-floating Jellyfish. It looks small to me not because it takes such a wide view, but because I was given such a minor stake in it. The tiny figure of my Bandit character doesn’t stand in for the sum of my decisions, or my engagement with rewarding systems of movement and attack. He doesn’t begin to represent anything. He’s a piece of the landscape, not part of a game.