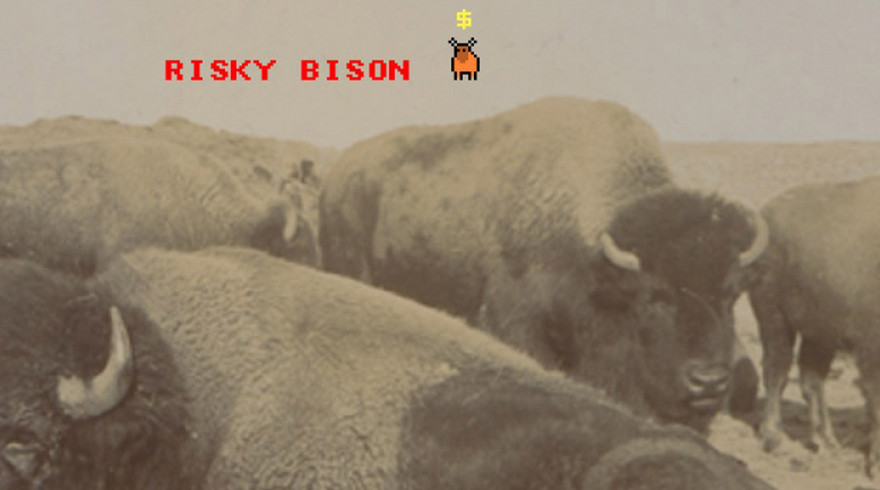 The USA can often seem like a country founded on the juxtaposition of superficially unrelated concepts, and, whether intentionally or not, Canadian developer Justin Smith has dug up a bright new gem of American association: the wildlife of the Great Plains by way of the ups and downs of the life insurance market. A “financial simulation arcade game,” Risky Bison is a largely genre-less piece which, though juggling many elements at once, feels very natural to play— and, once you get on the wavelength of its particular rules, compulsively so.

The player controls an insurance adjuster hustling policies to a small municipality of lightly anthropomorphized, Midwestern Bison. The mechanics of this are simple: you approach a Bison roaming around town (sometimes ambushing them right as they are leaving home) and get them to sign up for just a few dollars. The world, however, is a dangerous place, and it is not long after you land your first contract that one finds this particular community plagued with frequent sinkholes, fires, and other Bison with poor driving skills; to keep one’s clients alive and healthy (and paying into their premium), the player finds herself tasked as protector of this herd. In Smith’s words: “If you insure a guy for a dollar, and he survives for three minutes, you’re making money. But first you have to keep him alive for three minutes.”

The premise is invitingly strange, and, though it packs in enough detail to keep you alert, it is not a difficult game to pick up. (A rules sheet posted on the game’s cabinet at this year’s Fantastic Arcade is headed with the following, caps and all: “INTEGRITY IS A FUNDAMENTAL QUALITY DEMANDED BY EVERY ADJUSTER.”) It most resembles a classic arcade game in the sense that it invents a set of rules and expects you to play along—and once you have enough of a grasp on those rules to understand what’s going on, it ramps up the complexity pretty fast. This is one of the great pleasures of Risky Bison: whenever I felt that I had the game under control, a new detail would appear that re-oriented my attention. The game asks you to discover how to play it as it goes along, and it’s exciting to figure out the right balance of, say, knowing when to buy a boulder to plug up a sinkhole versus when to hire a firetruck to put out a blaze running through the middle of town. Eventually, crossing a scorched field to deliver an expensive cactus to your grandmother (yes, that’s in there too) feels like second nature.

Between rounds, I asked Smith to clarify some of his intentions for Risky. “I hope that people have a renewed interested in what it means to be insured,” he tells me. “And I still haven’t fully resolved that dilemma in me—why don’t I insure everything? Why don’t I insure my shoes? Something bad could happen. It probably only costs pennies a day, and somebody else bears the burden of that risk, of what could happen to my shoes. And it seems like a wise idea.” This sense of concern is certainly felt in the game; it is, at its core, a game about protecting life and property on extreme terms, and that combination of sensitivity and high-risk gives Bison some of its particular tone.

The game asks you to discover how to play it as it goes along, and it’s exciting to figure out

Smith’s previous game, Desert Golfing, is a much-loved peak of minimalist game design, and in some ways Risky Bison might seem like an odd follow-up; in every way it is a larger title, bursting with decoration and incident (see: the individual data that appears on screen for each Bison you approach, containing not only their names but their age, their smoking history, etc). Where Golfing was almost perversely simple, Bison has more in common with Smith’s Enviro-Bear 2000 and it’s “sure, why not?” embrace of filigreed ridiculousness. All three of these games, however, are united by a natural feel for the absurd and a kind of open-hearted mischievousness, while also taking their design seriously; these games are fun to play, not only because they are identifiably unusual, but because that weirdness is embedded in, and contributes to, ways of playing whose mechanics are as unique as the game worlds they live in. Risky Bison may be Smith’s most fully developed world yet.