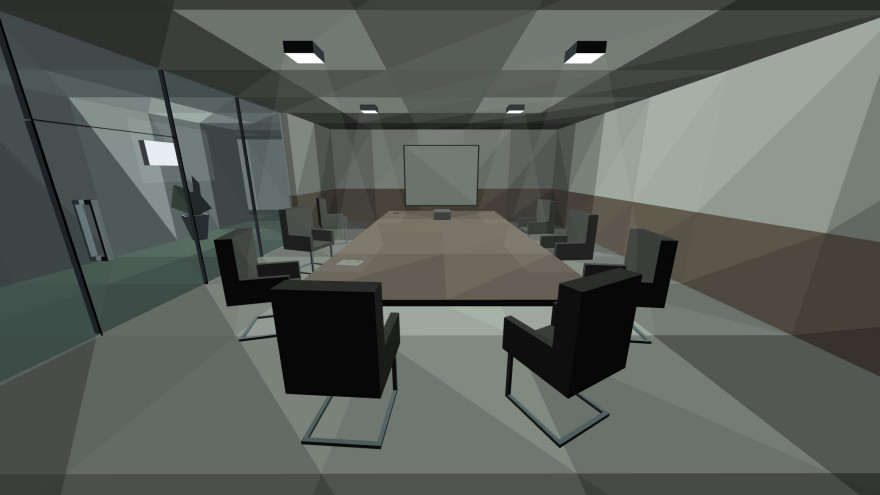 Tymon Zgainski is coming to the end of a four-year journey that has taken him from ennui to something closer to contentment, from teenager to adulthood. And now he has a date. His first-person exploration-adventure Rituals—formerly The Official—will be out of his hands and into the public’s on May 27th through Steam. “I’ve dreamt of this day and finally it’s happening,” Zgainski tells me.

I’ve only spoken to Zgainski twice since he started working on his commercial debut back in 2011. At first he showed me a grim-looking low-poly office: a chair in empty space, a noose hanging over it as if to imply an inescapable connection between death and desk jobs. It reflected Zgainski’s shadowy mood of the time as he learned to grapple the weight of mortgages, the meaning of life, and the mundanity that comes with growing up.

Much later, last year in fact, I spoke to a different Zgainski. He was a man full of dreams and escapism. When he showed me where he was at with Rituals back then, that grey office was nowhere in sight, favoring instead the bright greens of a jungle and a mysterious star-punched night sky. But none of what Zgainski had worked on previously had been lost. As I’ve written before, he has treated Rituals as an artistic videogame diary that he has filled with the changing thoughts in his head over the years, tying them together with the sturdy ribbon of an adventure game.

It’s due to this stream-of-consciousness-style approach to videogame production that makes it hard to pin down a single sentence that describes what Rituals is about (not made easier by my having not played it yet). Thank goodness, then, that Zgainsky has managed to do just that, and in the most teasing way. He says with confidence now that Rituals is about the the relationship between civilization and nature.

“Every environment and puzzle is designed to tell its own part of the story,” Zgainsky explains. “What is the real purpose of the office building? Why are you walking through the woods at night? Whose voice are you supposed to hear?” It seems that it’s to be a game that’s going to have us asking a lot of questions. Whether any of the answers will be provided is unknown. But it seems fitting with the overarching eerie tones and pensiveness that it would be left open for interpretation.

What is known about Rituals is that it’s a “classic” adventure game with point-and-click navigation and puzzles integrated into the environments. The idea being to provide an experience that you can play with only your computer mouse and your head. As you explore, you will find clues—symbols etched in floors, hand-written notes, amateur slideshow presentations—and with these you will seek out answers. “Be curious,” Zgainsky encourages.

With the release date announcement, Zgainsky has brought us a new trailer that, above all, seems to capture the chaos of these final days before Rituals arrives in a finished state: a rising drone sound whirs while sharp cuts between escalating moments of panic from the game play alongside it. There’s also a new website for those seeking a calmer way to interact with Rituals that takes you across the lost woods as you scroll, exploring it preemptively, clueless as to what its symbolic arrangements mean. No matter, as all will be revealed, and in only one month’s time.

You can find out more about Rituals on its website.