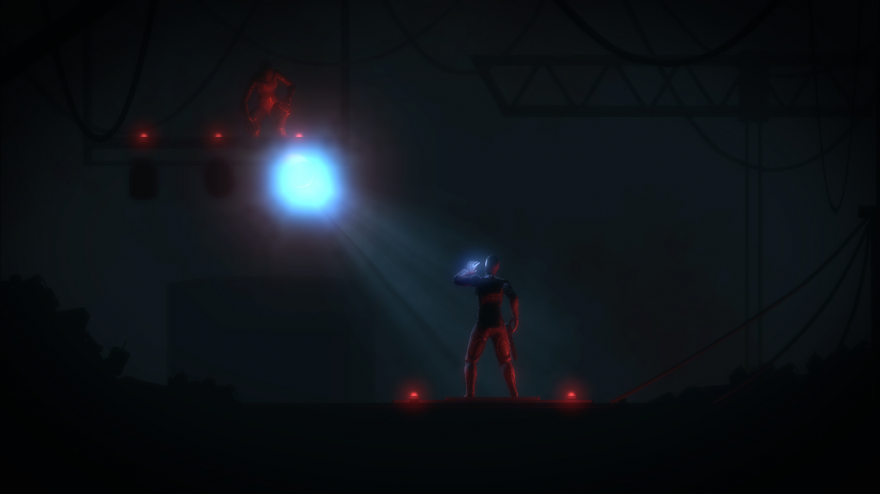 Let us start with the obvious: the fall is the name we give to the brief, untethered moment between stability and the ground. The impact is always there, beneath us, waiting. If there is a fall, there must be a landing.

And so The Fall begins with an uncontrolled descent, the game’s (as-yet) unnamed protagonist plummeting from some unknown origin beyond the sky into the unforgiving gravity of an equally unknown world. It is the Armored Robotic Interface Device onboard a mark—7 combat suit. Its primary objective is to protect her pilot—who is unresponsive. Internal systems are damaged, and the ARID is unable to assess his health and status.

This is the fundamental conflict of the game: the ARID must protect its pilot, but most of its systems are offline, requiring the authorization of a human to function. It can activate those systems as necessary in emergency situations, but it is bound by its programming to three directives: it must not misrepresent reality; it must be obedient; it must protect its active pilot.

Those limitations are the backdrop for The Fall’s gameplay. There is a contradiction embedded in them that becomes immediately obvious once gameplay begins: the abilities ARID needs to protect its pilot become available only when the pilot is in mortal danger. It takes ARID very little time to realize that by putting itself—and therefore its pilot—in jeopardy, it can create a situation wherein a necessary asset is unlocked, and then becomes usable (both for the suit and for the player). This realization begins the true story of the game: the transition between ARID, the Armored Robotic Interface Device onboard a mark—7 combat suit, and ARID, the young robotic woman struggling to save her friend, Colonel Josephs.

To make that transition, ARID must release many of her constraints, limitations, principles, and directives.

The game is a throwback to the old-style point-and-click adventure game, requiring you to solve puzzles with limited assets within a constantly shifting scaffold of constraints that limits what is and is not possible. For the most part, the game avoids the exasperating opacity that once plagued adventure games—flush the pickle down the toilet in order to get the car keys—but there is nevertheless little room for variation in how one solves the puzzles, and little room for choice within the story.

The Fall seems like something one might find if Ray Bradbury had written episodes for The Jetsons.

This is in keeping with the general retro feel to the game, though; from the puzzles set in a 1950s cult-of-domesticity household to ARID’s Fixedsys-rendered, ASCII-based interface, the world of The Fall seems like something one might find if Ray Bradbury had written episodes for The Jetsons. The stylistic choices dovetail neatly with the pointing-and-clicking to create an experience somehow reminiscent of the old text adventure games.

ARID is a wonderfully interesting character, although she has little opportunity for personality within the space of this game (the first of a trilogy). Her imperative to save her pilot pushes her to cast aside many of her other imperatives—which, as a digital entity constrained by her programming, is more or less impossible. As a result, the game becomes a story of a thousand tiny—and not so tiny—subversions, small ways in which ARID manages to satisfy the letter of a requirement while completely disregarding its spirit, often in ways that are absurd, hilarious, or horrifying.

And this is where the game begins to split at its seams. The story it tells is one of breaking rules by following them, and ARID solves problems always by rethinking, reworking, or reframing them, cutting through rather than untying a dozen Gordian knots. For ARID, there is always a solution other than the expected.

The nature of the adventure game is that there is little freedom in it.

Not so for us. The nature of the adventure game is that there is little freedom in it. There is room for a few small choices, perhaps, but for the most part, there is one solution to each problem, and one path through each puzzle. One right way.

At one point, ARID is presented with a problem that can only be solved by a horrific sacrifice. She is presented with the proverbial Big Red Button, and we are expected to press it. It was a sacrifice that I was unwilling to make, and one that—given the contrarian nature of the game—I expected to find a way around. After a few minutes of searching the area, though, I came to the conclusion that there was no other option. ARID, perhaps, could subvert her programming, but I couldn’t subvert the game’s.

But then again, there is no choice in a fall. There is only down.

ARID is told throughout the game that she is “faulty.” Time and again, other artificial intelligences recognize what she is doing—that she is behaving contrary to her programming—and tell her that she is defective. We are told this enough that we begin to believe it, and we start to think that she must be doing something wrong.

But here is the truth: I ultimately instructed ARID to push that big red button, not because I was not opposed to the sacrifice it implied, but because it was my job to see that Colonel Josephs made it to safety. When her robotic hand fell on that button, it was at the end of a trajectory that began with that same imperative: must protect active pilot. From that mandate, both for ARID and for me, flowed all of the choices and actions we took. It was that requirement that brought us through the facilities beneath the unknown world, that pushed us from danger to danger, and that drove us to fight, to escape, to survive. With ballistic inevitability, we careened through the game’s story toward its conclusion.

It will likely come as no surprise, given the game’s premises, that some of the assumptions ARID has made about her situation turn out to be incorrect. Her understanding of her situation is flawed, at best. On such faulty data was her trajectory set.