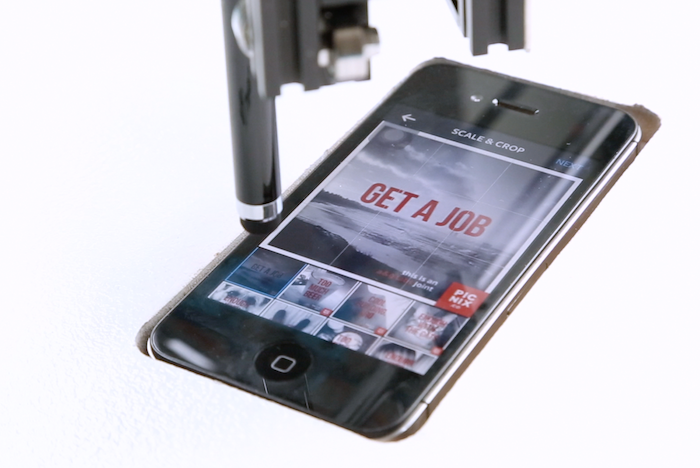 by Psfk
We all have that one friend: the one whose real-life presence you might appreciate because they enjoy the world around them or because they’re always up on the latest trends. Left unchecked on social media like Instagram, though, these otherwise positive qualities prove abrasive, leading to barrages of posts that are a bore except to the people who were present at the time the photo was taken. At times, they even seem designed to provoke your most serious FOMO (fear of missing out).
To combat these annoying gym selfies and #TBT overload, Allen & Gerritsen’s Labs team has built a new experimental device that might be able to gently quell your friends’ addiction to banal social sharing without blowing your cover over such a silly topic. Pic Nix is an “Instagram intervention” service, executed by an Arduino-powered xy plotter named Silent B.O.B. that uses its own iPhone to send snarky, anonymous messages to offending Instagram posters at your behest. The account even posts custom photos with overlaid text to better fit in among the humans.

Why a robot? Apparently, despite the robotically trendy behavior of its human users, Instagram abhors actual robotic posts, blocking its API from use by third-party applications. According to Labs’ team members George Ward and Chris Reif, because A&G; saw the service as “existing for [their] own selfish needs,” they originally wanted to get an intern to do the job, but quickly found some practical problems with that. Since the project is just an experiment for now and doesn’t have any support from a client, for example, there’s no anticipating what kind of human resources would have to go into Pic Nix’s operation should it become popular. And of course, B.O.B allows A&G; to “publish the photos in real time, 24/7, without us torturing interns.” And there’s just something fitting about a sassy robot doing work that an already-annoyed person can’t find time in their day to do.

The interface by which users interact with Pic Nix is easy and fun. On the Pic Nix site, they can select the offending friend’s username and select a cliched Instagram photo category from a pre-existing list. Two pre-populated captions can then be added to the post to detail the friend’s offenses. Why only two? Due to the API restriction, the robot must type out the posts itself with its grounded capacitive stylus, making the short missives into a labor-intensive process. Type2Phone, a Bluetooth keyboard emulator, speeds things up a little bit, but the process must still be done by ‘hand.’ It’s truly a Rube Goldberg machine for the passive-aggressive. And if it doesn’t work out, Ward and Reif say, they’ll just reuse the xy plotter for something else – let’s hope it’s equally devious.