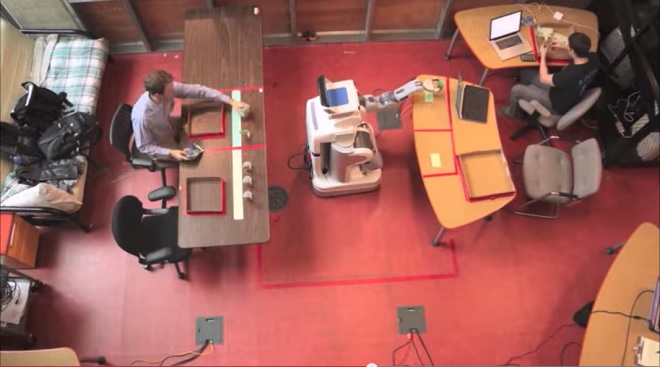 A recent experiment at MIT’s artificial intelligence lab discovered a cordial relationship between robots and humans really can exist. In fact, we may see humans and robots working together as coworkers in a professional setting.

The Interactive Robots Group at MIT conducted a study that replicated a assembly line in a factory. The two tasks implemented included either retrieving parts at the fetching station or building parts at the assembly station. Each station had two locations, but only one human could work at each station. Additionally, humans could either retrieve or build, but the human could only retrieve assembly parts.

Initially, the researchers hypothesized the humans would struggle with relinquishing control to let a machine become leader. What they found, however, was that humans were satisfied, and even preferred, to have the robot reign, because it significantly increased productivity.

When the robot lead the human team, the time it took to schedule each worker was dramatically reduced compared to when tasks were assigned manually, which took the most amount of scheduling time. Subjects also felt like the robot was intelligent enough to understand them and their goals while working.

In short, robots have no patience for tomfoolery and can easily increase productivity when given the chance. As technology evolves, so does the importance of robots as leaders.

Taking orders from a smart robot is not new. GPSes are now installed onto phones for every day adventures. We lean on Google and Siri to answer any question we can imagine. Even in videogames, tutorials are a robot’s way of telling us where to go and what to do. Ever been stuck in a game, hoping for an AI player to “hint” where to go next? Yeah, you’re relying on a robot to give you guidance; this stuff is old hat.

MIT’s experiment is only a fragment of the accomplishments humans can accomplish with the help of robots. Perhaps we should embrace their help instead of fear it.