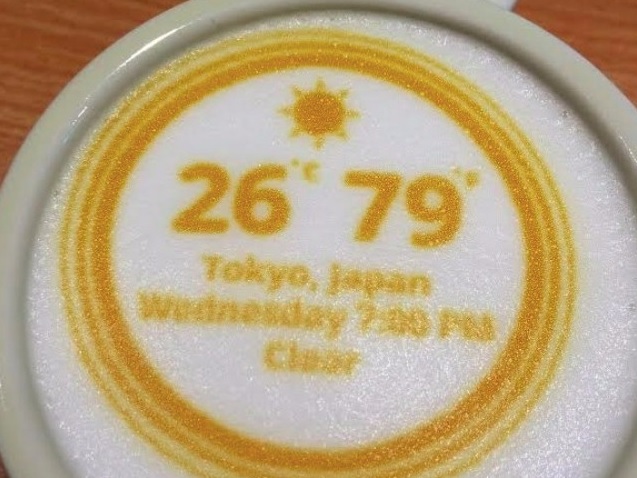 Your caffeinated beverage is, in all likelihood, milk with a side of coffee. Less generously, it is a milkshake. But what if your drink was something more than just the combination of espresso shots, steamed milk, and (heaven forfend!) pumpkin spice? What if your cappuccino was art?

This, in a demi-tasse, is the idea behind Ripple, an “internet of things” device that connects with an app to load images and then prints them in the froth on top of your latte or cappuccino. The device’s makers, an Israeli design studio-cum-startup called SteamCC, informed the Times of Israel’s David Shamah that it is a “foam printer.” Like a 3D printer, it can quickly churn out pixel-perfect images. A promotional video on Ripple’s site showcases a portrait of Miley Cyrus and a customized birthday message. “The entire operation takes about ten seconds,” SteamCC’s CEO Yossi Meshulam told the Times of Israel.

Traditional latte art can be produced either by carefully pouring milk to achieve popular shapes like hearts, leaves, and swirls, or by etching more complex patterns into the foam using small devices. Etching adds a layer of intermediation to the process of making a latte that Ripple multiplies exponentially. Even without Ripple’s technology, latte art can get plenty complex. In fact, there are national latte art championships that lead to the World Latte Art Championship. The latter competition states that participants are judged on “visual attributes, creativity, identical patterns in the pairs, contrast in patterns, and overall performance.” There are complicated score sheets for both the visual and technical aspects of the job. Even eye contact is measured. And for all that work, the results are necessarily and inevitably ephemeral. We know that Australia’s Caleb Chan won the 2014 World Championship with a score of 373.5 in the final round, but we’ll never be able to experience the art he produced that day firsthand.

The question with Ripple, as with most art-producing technology, is whether it takes the romance out of the enterprise and, if so, to what extent does that matter? Ripple’s demo video includes footage of a barista handing a man his latte with the inscription “Good Morning MATT!” etched into the foam. (Just imagine what Starbucks’ baristas could do if given the power to etch something vaguely resembling your name into your drink.)  The text is printed in a crystal-clear typeface, which is helpful and a bit off-putting, like being asked how you’re doing by a total stranger. The beauty of the gesture is entirely dependent on its context.

Do robots take the romance out of the enterprise?

It may however be possible to get past the context and appreciate the foam printer’s output. As Julian Baggini notes in his Aeon essay “Joy in the Task,” Nespresso pods are increasingly common in Michelin-starred establishments in England and France. Pods, by many accounts, produce a more consistent result. So much for romance. “The logical consequence of molecular gastronomy,” Baggini argues, “is haute-mechanisation.” How else is perfection to be achieved? Ripple takes the logic of Nespresso pods and sous-vide cookery to the next level by mechanizing its visual presentation. Insofar as it brings latte art within the reach of those who cannot visit Caleb Chan or his peers, Ripple uses mechanization as an egalitarian tool. The cost of this equality, however, is sameness. This is why the Mona Lisa in your doctor’s office and the Mona Lisa in your other doctor’s office are somehow less compelling than the original. As Baggini concludes, “Humans are imperfect, and so a world of perfection that denies the human element can never be truly perfect after all.”