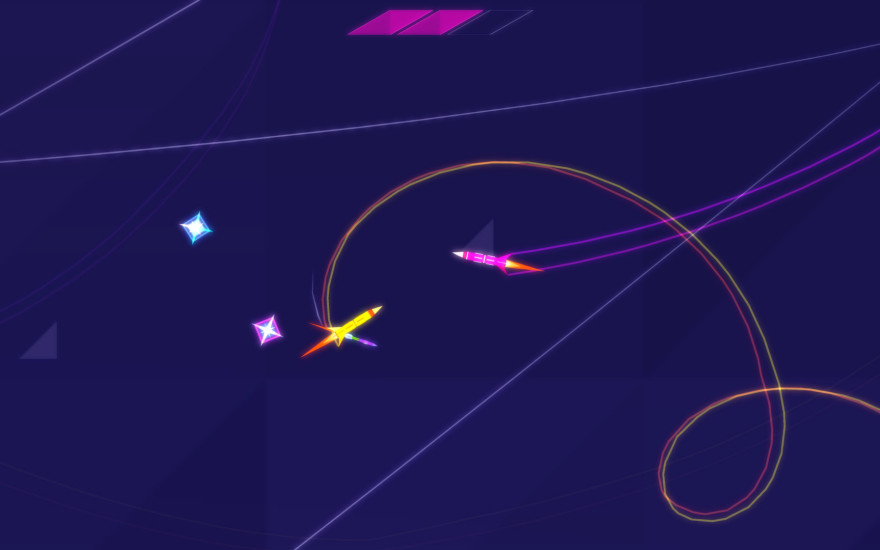 You’d be forgiven for presuming that a videogame with a name as loud as ROCKETS ROCKETS ROCKETS is a superfluous celebration of arms and their destructive nature, perhaps even with a setting.

That’s not to imply that ROCKETS ROCKETS ROCKETS isn’t brash. It is. And it’s certainly not set during the Cold War; that much I can confirm. My point is that it wears an all-capitals “look at me” carapace—the opposite of subtle—but the interplay inside is contrarily balletic.

When your body is able to escape the atmosphere how do you control yourself?

The word ROCKETS is repeated in the title three times for a reason: “ROCKETS fire ROCKETS at ROCKETS”. This is a single player and multiplayer arena-based showdown with rockets acting as the vehicles and the ammo with which you attack your opponent. There are bullets that travel faster than you, rockets that go slower, and bombs that explode into psychedelic rings of bright color.

There’s lots of ballistics. So much so that it engulfs you entirely. You aren’t a person sitting in a rocket; you a rocket. That distinction makes a big difference.

Humans make stiff rockets that mostly fly in straight lines and require teams of scientists and engineers to construct and control them. But imagine being birthed a rocket, with an air-cutting design—tubular with a sharp cone for a top—and thewy thrusters offering instant propulsion where your feet and ankles are. When your body is able to escape the atmosphere how do you control yourself? That’s where the chaos of ROCKETS ROCKETS ROCKETS lies.

At first you’re like a young starling praying for its wings to catch a drift after falling from the nest. You fly fast, too fucking fast. But you learn to adapt, to train your muscle memory, turning the wobbly curves in your wake into loops, u-bends, and sharp turns. The agility of these rockets belongs in the Luftrausers universe, where survival is only possible if you can stall your plane’s engines and turn on a dime in mid-flight.

Get to grips with that and you can dance. You spin tip-to-tip with the other rocket, sending pellets at each other, both of you equal in evasion and precision. You zoom off to gather yourself after the close encounter, and then you curve towards each other again; spinning, zooming, moving in rapturous coils.

So mesmerizing is this interplay that ROCKETS ROCKETS ROCKETS is to have a Zen Mode, devoid of death wishes and destruction. Unfortunately, it’s not available in the current Early Access build to my knowledge, but that doesn’t mean zen cannot be achieved regardless … just, there will also be rockets. Lots of rockets.