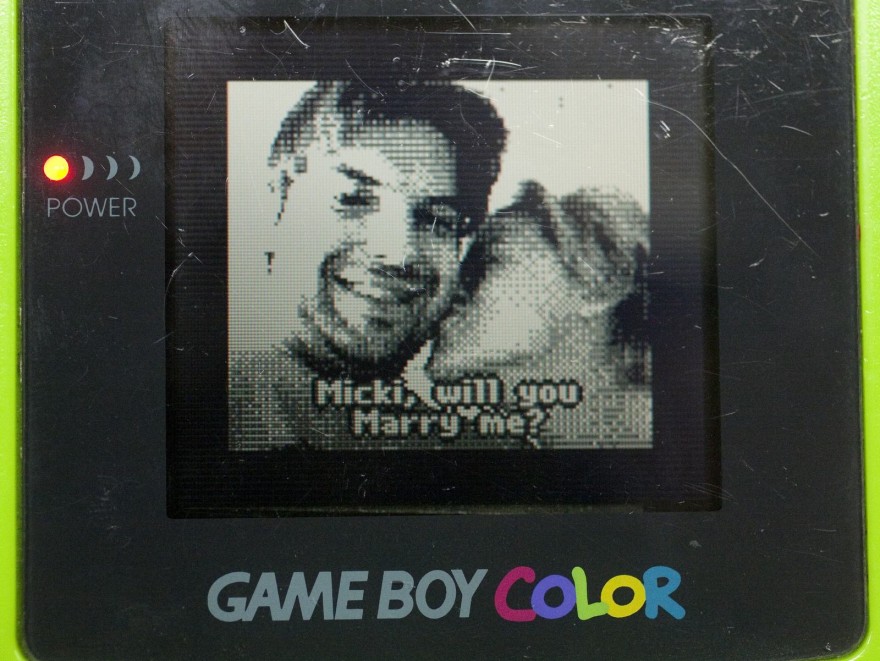 Developer Mike Mika desperately wants the women in his life to share his love of games. He recently hacked Donkey Kong so that his daughter could play as Pauline instead of Mario. And years ago, he hid a proposal to his fiance in an Easter Egg that he added to a Game Boy title that he was working on. (The classic puzzler Klax.)

But Mika didn’t playtest his proposal sufficiently—the difficulty level was too high! Luckily, Mika got an assist from every frustrated gamer’s best friend: Tips & Tricks magazine. We chronicled this heart-warming tale of in-game wooing in the Intimacy issue of Kill Screen.

Klax is a twenty year-old puzzle game available on more than 20 different platforms, from the Atari Lynx to the Commodore 64. All the different versions are essentially the same: colored blocks roll along a conveyer belt, and the player has to stack and arrange them. But the Game Boy Color version had a singular mode: a marriage proposal embedded deep in the code.

It was hidden there by Mike Mika, lead engineer and designer of the game. Klax was a big deal for him—it was to be a launch title for Nintendo’s new handheld, and tailoring the game to the new hardware required a lot of crunchtime, which kept him away from his live-in girlfriend Micki. “That’s how game design works,” he says. “You just disappear, you’re in the office 24/7. Girlfriends become widows.”

A few weeks before the game shipped, he was stuck in the office in the middle of the night waiting on some bug fixes when the idea struck him: why not use Klax to pop the question? He had a picture he’d taken of himself and Micki with the Game Boy Camera peripheral, and he dropped it into the game, along with a brief string of text. Using the cartridge to propose was a way to make up for all of that time apart. It was also a way for Mike to involve Micki in gaming, which dominated his work and leisure time. “She hadn’t played much since Atari Pitfall,” he says. “When I played games, she’d watch a little bit, then get bored and wander off. I wanted to merge these two worlds that were refusing to merge.” He was unable to interest Micki in more complicated games like Legend of Zelda, but she seemed to like simple puzzle games. Klax could be his Cyrano. Or he could be Klax’s Cyrano. I’m not sure which.

There were many fun extras buried in the Klax cartridge: Credits, backstory that fleshed out the history and mythos of the Klaxiverse, a Snake minigame, another minigame called Furd Herder. Those were all fairly easy to find. But Mike hid his marriage proposal deep in the code, and he didn’t divulge its existence to the publisher Atari or the console maker Nintendo even though they generally insisted on knowing about such things. He buried it so deeply that no tester would discover it before release, and no gamer, no matter how obsessive, would accidentally stumble upon it after the release. This was his own personal bonus level, and it was designed for one special person to access.

If you want to see it, you can get a used copy of Klax for about $5 on Amazon. First, you’ll have to access Klax’s password entry screen. Then you have to enter a specific code: Red circle, pillar, pillar, blue square. The game reacts as if that password is invalid. At that point, you have to enter it again. And again. Ten times in total. After that, you see a grainy, low-res, black-and-white proposal.

No one at Atari or Nintendo caught wise to Mike’s secret feature. Klax GBC was released in April of 1999. Mike presented the game cartridge to Micki, along with a list of codes she could use to unlock all of the fun secret content. “The first one on the list was the wedding code,” he says. Then he waited.

This was his own personal bonus level, and it was designed for one special person to access.

“I kept leaving the Game Boy out,’” Mike says. “I kept reminding her, ‘You should try it, I think you’ll like it. You should try the codes.’ She told me that she did, but clearly she didn’t.”

Months passed. Mike got her to play some other games. (“Animal Crossing is probably her favorite of all time,” he says.) But he could not convince her to pick up Klax and slog through the interminable series of password entries to reach his hidden message. Amazingly, he also didn’t bother to come up with another way to propose. “We had a house together, we had a dog together, we were already, like, common-law married,” he reasons. “And those years were so busy; I was in continuous crunch.” Maybe he also felt like he’d already come up with the perfect proposal, and anything else would be unworthy.

Four years later—four years later—salvation arrived in the form of an email from an editor Tips & Tricks magazine. He was seeking never-before-revealed secret codes that he could publish in their 100th issue. “That’s when the light went on,” says Mike. Tips & Tricks was a monthly devoted entirely to strategy guides and secret codes. It taught gamers how they could easily defeat Psycho Mantis in MGS and enter Big Head Mode in NBA Jam. If anyone could guide Micki through Klax, it was Tips & Tricks.

In June 2003, Micki came home from work to discover a Game Boy Color on the kitchen table, as well as a copy of the a certain videogame strategy mag, opened to page 39. The article on that page was addressed solely to her. It walked her through the elaborate process of accessing the secret message, and it told her she’d be very happy with what she saw there.

She was. Micki called Mike on his cell; he’d been puttering around in a nearby drug store, nervously awaiting her reaction.

Mike raced home to his new fiancé. Micki was absolutely ecstatic—for a day or so. It soon dawned on her that the proposal had lain dormant in that cartridge for four years. Four years. Why did he wait so long? Mike tried to lighten the mood by joking that he had programmed twenty different proposal screens with twenty different women’s names into the game. She did not laugh.

They got married the following year on the island of Kauai in front of 50 their friends and relatives. Mike spent a week designing a special wedding game, and burned it onto CDs for all in attendance.  The game, titled Tropical Wedding,  begins with an evil overlord emerging from a dormant volcano. He steals all of the in-game loot—wedding rings, which look suspiciously similar to the rings from Sonic the Hedghog games. “All your rings are belong to us!” says the evil overlord, adding “HA HAHAHA HA HA !!”

An in-game anime-fied version of Micki laments the loss of the rings “only days before our wedding!” It’s up to a virtual version of Mike to collect them, driving across the volcanic landscape in the manner of the classic 1982 coin-op Moon Patrol, dodging ditches and projectiles fired by flying tikis while scooping up the errant jewelry.

Mike’s gamer friends loved Tropical Wedding. Micki liked it too, though she didn’t get very far in it. “She thought it was too hard,” he says. “And she was right. After all of these years, I’ve given up trying to get her into something like Zelda; that was a fool’s errand all along. (But she likes Kinect and Dance Central, though.)”

If she’d beaten the game, she’d  have seen another secret message. The final screen shows a little pixelated man and a little pixelated woman embracing underneath a couple of pixelated hearts. There’s also a string of text, the gamer equivalent of “and they lived happily ever after.” It reads: