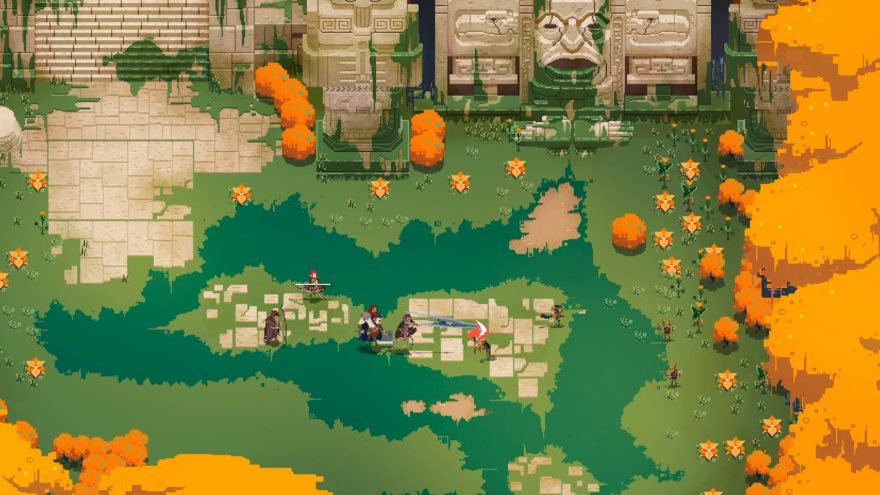 There’s a close-knit cloud of terms frequently cropping up in the discussion of action role-playing games lately. “Atmospheric,” “minimalist,” “roguelike,” “pixel art,” et cetera. Hyper Light Drifter established its appeal almost entirely on the back of these signifiers. Titan Souls did the same last year, and the upcoming Children of Morta is looking to bring in the same traffic too.

But for every new (or, in this case, old) aesthetic enjoying the apex of popularity, there comes the inevitable point of exhaustion. Such as might become the case with No Place for Bravery. It is pitched along the lines of being a 2D roguelike action-RPG set in an atmospheric high-fantasy world with a minimalist control scheme and a time-travelling twist. Sound familiar?

That’s not meant as a command for everyone to be overtly dismissive of Glitch Factory’s latest take on what can now rightfully be called a trend in modern games. The team itself acknowledges the precedent of its forebears, even going so far as to cite Hyper Light Drifter as a primary inspiration for the game’s look and feel. And, hey, if creators and artists weren’t permitted to pay homage or acknowledge one another, then we’d all be far poorer for it, right? But there’s a crucial difference between wearing your influences on your sleeve and inhabiting them wholesale.

All of which is to say, in simpler words: why should we care about you, No Place for Bravery? It’s a hard case for the game to make given that pretty pixel art is something at least some of us aren’t so easily wowed by this side of 2016.

Where No Place for Bravery does look to distinguish itself is that time-control mechanic. Oh, and an apparently stripped-back form of exposition crafted through procedurally generated encounters. Aside from it’s all familiar barks of “permadeath” and “no numbers!”—descriptions that, as of late, have become somewhat tiresome, mostly serving the mandatory idea that these types of games have to be “hardcore.”

Anyway, to end on a less tired note, the game’s only been in production for two months now. There’s plenty of time for Glitch Factory to build the game out and, perhaps, dig into fresher soils and shove whatever might be found in our faces. It still has the potential to become more than the sum of its contemporaries. Hopefully.

You can find out more about No Place for Bravery on its website.