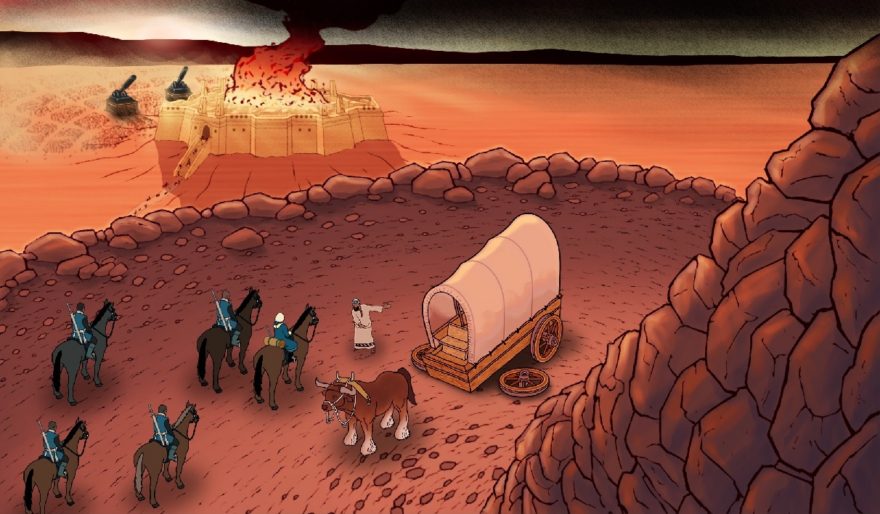 Before the imperialism of the 19th century, or the World Wars of the 20th, there were the Crusades: a series of military campaigns in the Middle-East between the 11th and 15th centuries. During these campaigns, various Christian European powers sent large numbers of well-equipped men to what was dubbed the Holy Land to fight against local inhabitants, as well as the largely Muslim Turks, who would eventually become the Ottoman Empire. They were fought for a number of reasons: to capture Jerusalem, to help the Byzantine Empire maintain control of its lands, arguably to attempt to reunite Eastern Christians with their Western counterparts, and at least publicly to combat what was labeled as paganism and heresy.

They’ve been covered in games before, notably in the Assassin’s Creed series, which highlights corruption among the invading European forces and the oppression they inflicted on the native people (especially those of Jewish descent) of the cities and regions they claimed. The violence lasted on and off for roughly 400 years, and though it did help lead to the Renaissance through the various treasures and knowledge pillaged by the Europeans, it ultimately resulted in very little territory being established in exchange for the bloodshed that paid for it, and is generally not remembered well by historians, who argue that faith alone did not justify the slaughter.


Tahira: Echoes of the Astral Empire is an upcoming tactics game that isn’t about the Crusades directly, but the influence is clear. Inspired by the writer’s time spent in nations like Turkey, Syria, Jordan, and Israel, the game places the player in control of Tahira, the last heir of a small kingdom that is on the verge of invasion from the “genocidal Astral Empire.” While the architecture and fashion of Tahira’s people are influenced by the history of the locales visited by the writer—loose-fitting robes and turbans, etc—the Astral Empire is clad in gear more resembling medieval European armies, such as red-and-white plate armor, crosses, and massive shields. The imagery is there, if a bit stereotypical, but more important is the message: this is an invasion from an outside force bent on either absorbing another culture into its ideology entirely, or killing it in the process.

The twist, then, comes in this world’s backstory. First, Tahira does not take place on Earth. Rather, it is set on an old colony world from a long-forgotten human spacefaring empire, where the descendants of the explorers have let their heritage fall into legend and have reverted to a more medieval way of life. However, the planet was only ever partially terraformed, and the more they stay put, the more inhospitable it gets. Hence the Astral Empire and its crusade to take over and “unify” the planet towards returning to the stars before it’s too late.

an old colony world from a long-forgotten human spacefaring empire

The problem arises in their methods, which involves slaughtering any who would oppose them or refuse to be subsumed into their whole. Still, the difference between the historical crusades and the Astral Empire raises an interesting question: can a crusade ever be justified? While the crusades in our world were often predicated on flimsy excuses, the one in Tahira is made in the name of survival. If the people of this world do not leave the planet before it is too late, they will die. At the same time, though, is survival worth it if those who remain have to sacrifice their integrity to get there? Can they live with themselves afterwards?

It’s the type of question raised by stories like Ursula K. Le Guin’s The Ones Who Walk Away from Omelas (1973), in which a utopian city is only able to prosper due to the perpetual torture of a single miserable child. When citizens of the city learn about this, they have to choose whether to live with that fact and accept the city’s bounty, or to maintain their integrity and leave for a more uncertain future. Similarly, Tahira confronts the audience with whether the Astral Empire’s goals justify their crimes, or whether a society that commits such crimes even deserves to survive in the first place. Maybe, in this scenario, the needs of the many do not outweigh the needs of the few.

As Tahira herself, the player must both decide where they stand on these larger issues while still leading their homeland’s armies to defend her people from the Astral Empire’s more immediate invasions. This is done through turn-based tactical battles similar to Nintendo’s Fire Emblem series, each of which also feature detailed rotoscoped—essentially the 2D version of motion capture—battle animations. At the same time, the game’s story will unfold through choice-based cutscenes and dialogue menus, similar to BioWare’s Mass Effect series or Telltale’s The Walking Dead. And like these series, choices made early on are promised to make important changes in how the story progresses.

If that sounds exciting to you, then you’ll be glad to know that after a successful Kickstarter campaign in February of 2015, the wait for the game is almost over. On July 12th, the game’s team released a Kickstarter update with two new pieces of information. The first was a new trailer for the game, largely showing off plot details that had already been revealed by the initial Kickstarter trailer, but this time with new rotoscoped animation. The second was a release date: August 31st. Meaning that, for all you would-be leaders out there, it won’t be long until you take command. Just remember that with command, also comes the burden of deciding who lives, and who dies.

You can find out more about Tahira: Echoes of the Astral Empire on its website.

Update: An earlier version of this story stated that the game was expected to release episodically. After speaking with the developers at Whale Hammer, however, we have learned that Tahira is now planned for a standalone release, and have updated the story accordingly.