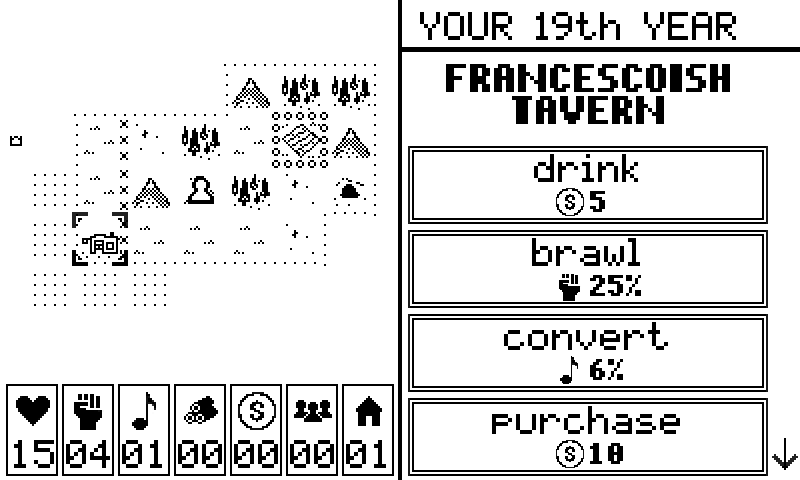 Social climbing is hard when you start very close to the end of your life. In Royals, a game for Mac and PC by Asher Vollmer, your final days are not that far removed from your first steps. You play as a medieval peasant who is attempting to climb to the top of the social hierarchy and become a royal. No matter what you do, however, you will die young.

No matter what you do, you will die young.

That is not to say that Royals is an exercise in futility. There is clear value in attempting to ameliorate your living conditions and potentially extending your life by a few years. Royals is a quest for a better life, albeit one that feels altogether more modern than its setting. It is a dream of social mobility that could not be readily realized until recently. (One might well contend that this dream is hardly realizable now. Let’s stipulate that the status quo is, if nothing else, probably better than medieval Europe.) That is not to say that Royals is anachronistic—dreams of moving up have existed throughout history—just that the experience of playing it encourages you to project your dreams and relative optimism onto a character.

There is, however, a macabre quality to Royals. The 1-bit colour scheme does nothing to alleviate concerns about imminent death. Nor for that matter is the game map soothing. It is possible to expand it by going into exile for a year but the more likely outcome is that the monarch’s soldiers will surround you. As your years remaining count down—the time until your death is visible in the bottom corner of your screen—the number of troops tends to grow. Maybe they are two sides of the same coin, both serving as reminders that life is out of your control.

Gameplay notwithstanding, everything takes a long time in Royals. If you choose to tend to a field, that will take a year of your life. Want to dig a mine? That’s also a year. Finding a spouse? If all goes well, that takes a year. These high opportunity costs make for compelling gameplay but, like everything else in Royals, they are somewhat saddening. You do all of this work to make it to the top and, if all goes well, you get to enjoy it for a few years.