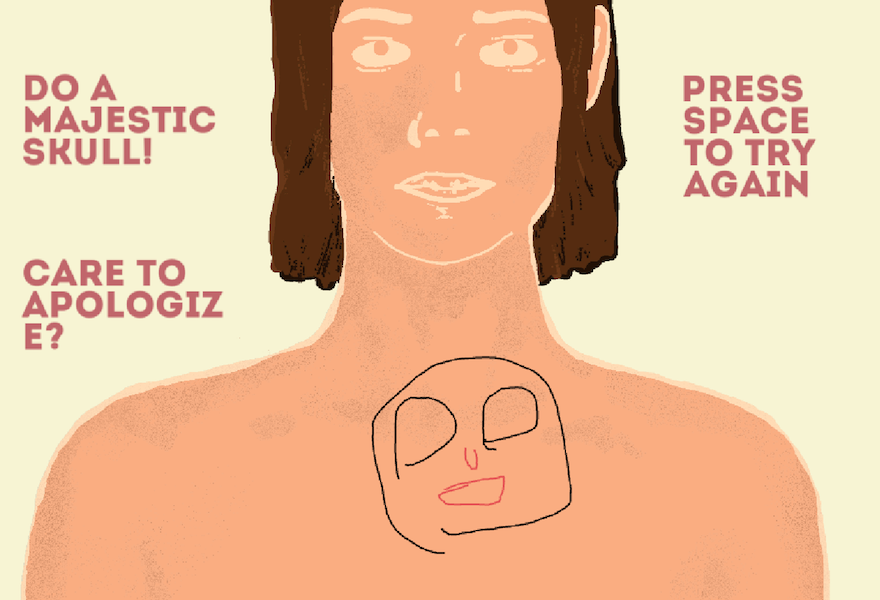 For a little while now, I’ve been contemplating whether or not I want to get a tattoo. It’s not that I have a particular idea for one in mind, so much as it is that I like the thought of using ink to assert my own bodily autonomy. I just have two issues stopping me from pulling the trigger. The first is that I can’t think of a design I want at the moment, let alone one I’ll like decades down the line. The second is that I worry about where I should go for such a permanent change. After playing Burgess Voshell’s Ten Second Tattoo, I can at least say: probably not here.

On the surface, Ten Second Tattoo has all the makings of a Jenny Jiao Hsia game. It’s got her same soft palette art style, the same font she uses in many of her own games, and its conceit is similar to Hsia’s Morning Makeup Madness, only instead of putting makeup on in a 10 second time limit, you’re applying something that can’t be wiped off—a tattoo. The title screen even has a disclaimer reading “A Game Not By Jenny Jiao Hsia.”

I’ll admit, the first time I saw screenshots of the game, I was fooled. Hsia herself had posted them, and I assumed they were part of a sequel to Morning Makeup Madness. In the shots, she had appropriated the game to do some rather “bold” permanent makeup, leading me to ask “Dear Lord, what are you working on now?” She laughed, and pointed me to Voshell as the actual person behind the project.

“It’s a bit of an ouroboros situation”

In an email, he explained to me that Ten Second Tattoo was part of an NYU Game Center assignment asking students to make a fan game of another student’s game. He chose Morning Makeup Madness, and here we are. “It’s a bit of an ouroboros situation,” he tells me.

As a fan game of a small browser title, Ten Second Tattoo occupies a space not seen often in games. After all, it’s usually only larger games that tend to see fan games based off of them, urged on by vibrant modding scenes and powerful user creation tools. By contrast, Ten Second Tattoo shows us what happens when creators riff off each other’s smaller works.

The result is a title that captures Hsia’s signature use of frustration as a mechanic while upping the consequence, and it is a hoot. Let me be blunt: I am not a good tattoo artist. Of the dozens of customers I’ve seen in Ten Second Tattoo so far, only one has ever had a positive reaction, and I think he might have been being sarcastic. The others keep asking for my manager or about our refund policy, and frankly, I’m surprised they’re being so polite after I’ve (almost) permanently destroyed their chest like a toddler scribbling on living room walls. In my defense, though, drawing a “murderous balloon” or a “poisonous moon” isn’t easy, let alone in 10 seconds. Be kind to me, Yelpers.

You can download Ten Second Tattoo for PC and Mac on Gamejolt.