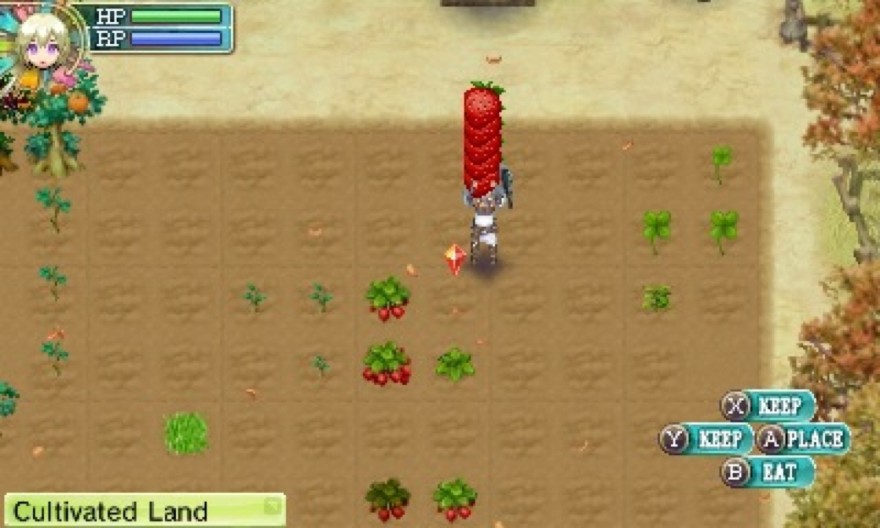 Horror games often play off your fear of the unknown. An unexplained bloodstain, a far-off howl, a mysterious disappearance—these create an atmosphere of suspense and terror. But there’s more to horror games than their content. The story of Rune Factory 4, for example, has many horrific elements: people turn into monsters, monsters turn into food, and one dungeon is a haunted house. But Rune Factory is as horrifying as a mug of coffee in the morning. Its gameplay delights in routine: farming, chatting up the neighbors, fighting, and leveling up. There’s no game over and very little hidden information. The game seems bent on fulfilling its players’ expectations. It is, if anything, an anti-horror game: a comfort game.

In Rune Factory 4, your typical day begins with harvesting crops and watering plants, followed by tending any animals you’ve tamed. Every day the villagers have something new to say, at least for the first year, and you can fulfill various requests or do your own exploring. At the end of the day you go to bed and replenish your energy. At first glance, it feels like Harvest Moon crossed with Secret of Mana, but the game is more purposeful than that. The farming, fighting, crafting, and relationship aspects are intertwined in a way that encourages players to do a little bit of everything. The comfort game is one of gentle pleasures, of routine maintenance and quotidian chores.

In addition to grinding stats, deciding what to grind is part of the game’s “routine maintenance.” Fortunately, one information screen explains many of the game’s variables and shows their levels; all the info is right there before you. Pick a stat, practice an activity related to that stat, and watch it increase.

The “game” of making each day as efficient as possible is there for those who seek shelter in the satisfaction of a day well spent.

Taking a bath increases your bathing level. Baking bread raises your cooking level. Leveling up your skills also increase other stats; if you farm enough, you’ll get strong, and that strength could help you in a fight. Crafting takes on more importance when you know it can help raise your core stats. You are constantly partaking in the small joy that is watching numbers increase.

There is little to prevent you from gradually increasing all your stats in this game. But like any good factory, serenely churning away, once everything is running smoothly the next question becomes one of efficiency. Any waste in your limited day seems like a catastrophe of wasted resources. You might be tempted to make your character work long hours, all in the name of efficiency. The “game” of making each day as efficient as possible is there for those who seek shelter in the satisfaction of a day well spent; the actuarial glee of getting the most out of your workers without exhausting them.

Like other farming sim games, giving villagers their favorite food will raise their relationship level faster. In real life, most people would be a little suspicious if you wouldn’t stop giving them sushi. Horror games play off the unpredictability of player-character relations, with possessed children becoming suddenly violent or your own character gradually becoming insane. But in the anti-horror game, villagers consistently grow to like you by engaging in the same activities over and over.

While the systems are transparent and predictable, so, unfortunately, are most of the characters. There’s a forgetful woman, a man who’s tough on the outside but actually kind of nice, the man whose home village was destroyed, and an aging butler. There’s a little self-awareness in the game of how tired the tropes are: after you fall from the sky someone asks how it’s possible that you only have a sore back. The self-awareness relieves some of the predictability of the story, but doesn’t cover new ground. The game seems almost too eager to present exactly what you’re expecting, to its detriment.

Don’t we often come to videogames for this, anyway?

The game’s biggest downside is that it looks and feels almost the same as its predecessors, but then, familiarity is one of the game’s strengths. Don’t we often come to videogames for this, anyway? The little experience points popping next to a headshot, the reassuring spell names in a menu, the familiar bound into the air. Rune Factory just delivers on this transparently. The game’s openness allows players to be as particular as they want to be about efficiency and stat maxing, and the way requests are set up makes the game accessible to anyone. It’s a satisfying and calming, if somewhat grindy, simulation RPG for a variety of playing styles—the perfect balm for whatever horrors might ail you.