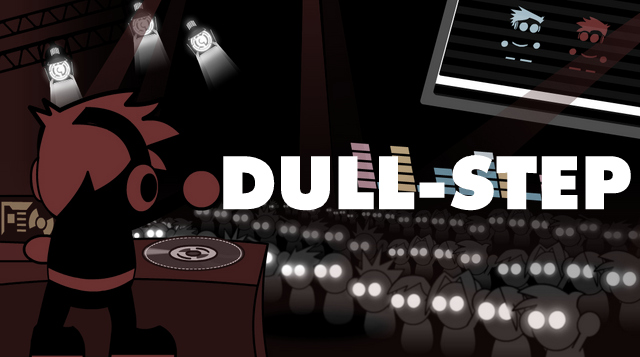 I always liked the term electronica.

Electronica evokes an era when video game culture and dance music seemed ready to merge completely. They’d always been close. Both were born in the same hospital in the late 1970s, and through their short lifetimes, both have challenged conventional media in their approaches to (respectively) storytelling and song. Both grapple with the divide between man and machine; at their best, they embody that divide absolutely. In the late 1990s, though, dance musicians began to toy with videogame iconography, and games such as Rez, Wipeout, and Jet Set Radio discovered the joy of a four-on-the-floor pulse, a well-constructed loop, and a minor key synthesizer line. It’s a natural match.

So what Rush Bros. attempts to do makes sense. In it, players race across brusque platforms, and the tempo of the background music influences the behaviors of certain obstacles. A buzzsaw pops out on the three count, a platform jerks away on the one and two. Synchronicity is assured. As if to prove the resilience of the concept, customized playlists are allowed, letting me traverse the level to, say, Neil Young if I so choose. I give it a shot. It’s weird.

After my ill-fated foray into customized playlists, I switch back to the game’s original music, which ranges in style from breathless club music to thickly produced dubstep, and which ranges in quality from bad to extremely bad. It’s maximalist stuff; several artists are used, but Deadmau5 seems to be the stylistic north star. The provided soundtrack, however, at least reflects the aesthetic. Apparently, the Mountain Dew marketing department gets around.

This is the bad taste of manicured facial hair and Budweiser Black Crown.

The titular brothers are DJs, rocking headphones and eyes that slant downwards in a mudflap vision of a “troublemaker.” Speakers are piled preposterously high in the background, as if to suggest an adolescent dreamworld. I half-expect skulls and weed leaves to twirl across the background. As a whole, Rush Bros. is unpleasant, but it’s also absolute in its evocation of a certain type of bad taste.

This is the bad taste of Fuel TV’s internal advertising, of manicured facial hair and Budweiser Black Crown. It is the bad taste of the lavish videogame marketing spend, of a concerted multimedia push for the 18-49-year-old white male’s discretionary cash. But that marketing demographic couldn’t care less about some indie platformer. All that bad taste, which wafts off the game like so much body spray, is either the result of cynicism or delusion.

Still, the fundamental aspect of the game’s “racing” hinges not on the quality of the music but on the manner in which that music alters the world. At first, the stages are eerie, empty boxes. Running through them while listening to exuberant club music inspires both cognitive dissonance and loneliness. As challenges mount, so do frustrations: springs almost always launch the player directly into a spike, and routes that start off being obtuse eventually blossom into being repetitive.

That foul exterior, it seems, seeped into the game’s heart.

That foul exterior, it seems, seeped into the game’s heart, infecting the very structure of the levels. The video games of electronica’s golden age empowered the player through a sense of speed and absurdist color schemes, but this is a game of intentional frustration. It stymies the player.

The gnarly, kick-flipping audio-visual experience betrays Rush Bros. by refusing to gel with this constant inactivity. But, worse, it raises the spectre of those better, earlier games, which serve to remind us that culture has moved on from that era. The umbrella term “electronica” couldn’t contain what electronic music wanted to become: splintered into a thousand sub-genres, concocted on laptops across the world, and absorbed via headphones in the places we stand and eat and breathe. (Hotline Miami, the grandchild of those games, seems to have never known a world that wasn’t fractured.) The utopian nightclub ideal has made way for real life, as thorny and imperfect as that might be.

Like Braid, Rush Bros. is a videogame abstraction of a real-life tragedy, but rather than the deep melancholy of a break-up, what it recreates is the deep melancholy of a shitty nightclub. The flashing neon lights, the party music that insists upon fun when no one seems to be having it: these things live in our world behind $10 cover-charges and grenadine-slick doors. As I lurch through these gaudy fantasias, I sense the heat of other humans but can’t quite find anyone; I slide, sluggishly and at intervals, down walls. I slam gin and tonics, attempt to find a beat, and eventually settle into a slouching, dead-eyed leer on a couch. The music, of course, bleats on unaware.