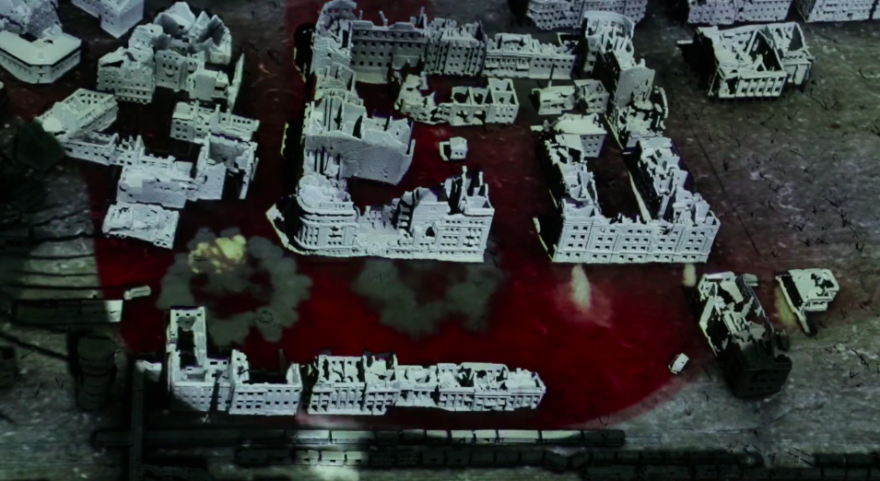 Over a five-month period lasting from August 1942 to February 1943, an estimated 1.7 million casualties were suffered in Stalingrad, Russia. The exact figure is up for debate, especially when it comes to civilians. “The street is no longer measured by meters but by corpses,” the British journalist and historian Max Hastings writes in his book, Inferno: The World at War. “Stalingrad is no longer a town.”

“The street is no longer measured by meters but by corpses.”

Hasting’s idea of death as spatial measurement akin to centimeters or inches can be seen in a new installation at Russia’s Volgograd State Panoramic Museum. Designed by in[visible] studio, the installation is based on a miniaturized Stalingrad. That model was then projection mapped, allowing the artists to overlay details about the battle: lines between the Soviets and Axis forces move back and forth; flashes represent bombings; red arrows sweep across the city. In[visible] studio’s installation features all sorts of information, but really it all just looks like the city was drowning in blood. This may not have been the intended effect, but it’s hardly an incorrect representation.

In the 1987 Bond film The Living Daylights, the villain, Brad Whitaker, is a weapons dealer who lusts after the idea of war even though he has never served a day in his life. He collects battlefield dioramas that resemble the in[visible] studio’s installation. The film argues that there is something immoral about these dioramas: He who merely looks upon these tableaus is living in a world without consequences, a world where these sorts of tragedies are doomed to repeat themselves. In[visible] studio’s installation can be seen as an attempt to reclaim the war tableau, to drench it in all that is ugly about war, lest we too become Whitakers.