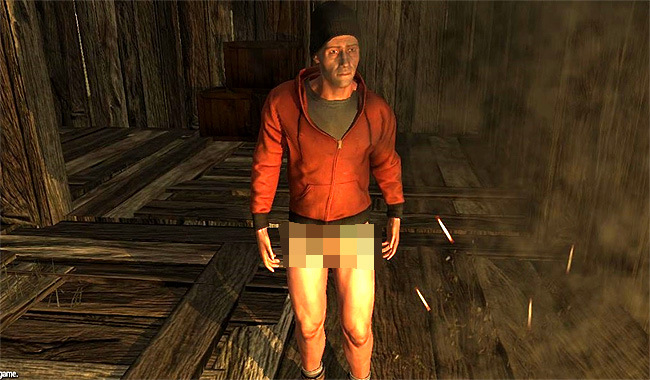 I’ve never played Rust, but creator Garry Newman seems hell-bent on winning me over anyway. First, he installed a controversial update which, rather than give the player extensive customization options, randomly assigned race instead. “Just like in real life, you are who you are—you can’t change your skin colour or your face. It’s actually tied to your steamid,” he declared in a blog post. What Newman failed to mention, however, was that another aspect of your identity would soon be determined by your Steam ID. Only this one is localized to your nether regions rather than your face.

That’s right: regardless of how cold it is outside, your schlong size will not only be determined for you, but also set in stone once it’s attached to your Steam ID. “It takes the 64bit int Steam ID and uses it as a random seed which is then used to randomise a bunch of stuff about the player—dick length being one of those,” Newman explained to Kotaku. “We do this so players will be kind of recognisable in game and that their identity could be something that will follow them around.”

there’s a dick for everyone!

From the looks of the video posted by Redditor M4STER_TROLL (who was first to discover and post about the feature) the disparity between each penis models is, erm, sizable, to say the least. And watching a virtual dick grow and shrink before my eyes feels not only like an embrace of body positive imagery, but also feminism (yes, feminism. We’ll get there). Because there’s a dick for everyone! You could be the grower, or you could be the shower! Your tip might skew upward, or your shaft might outshine all else. Regardless, this is your flaccid penis bestowed upon you by your own Steam ID. Use it wisely, and give it all the love it deserves.

How is this about feminism? Well it isn’t. Not directly, anyway. But, for me, just about any visual and public examination of the penis feels like a win. For too long, women’s genitalia have suffered endless scrutiny while male genitalia hides safely tucked inside a modesty sock. I can’t count the number of boobs I’ve seen bared in TV, movies, and videogames. But I can count on one single hand the amount of full frontal dick I’ve ever glimpsed on a screen. Basically it’s just Ben Affleck’s side-penis, Tobias Menzies on Outlander, and Lebron James (by accident). And to that I ask in all sincerity: where them dicks at? I’m not advocating we start having white pants contests in clubs or anything. But I will applaud anything that levels the playing field a bit more. And also, anything that gives me a reason to talk about penises for an extensive amount of time.

The discovery of this feature also comes with a timely update from the Facepunch devblog: they’re working on female models. And they’re not boob-ified harlots dressed in safari Barbie outfits either. “We really don’t want to make the female model unrealistic in the sense of her being aesthetically idealised,” reads the post by Craig Pearson. “In the same way that our male models aren’t perfect specimens of the male body, neither should the female be. No huge boobs nor four-inch waists here.”

No word yet on vagina variation, but I remain hopeful. At this point, Facepunch and Rust seem incapable of doing any wrong. But I’m going to be pissed if every female vagina comes out perfectly waxed and pre-pubescent. Seriously: do the right thing, Facepunch, and make those survival-vaginas realistically hairy.