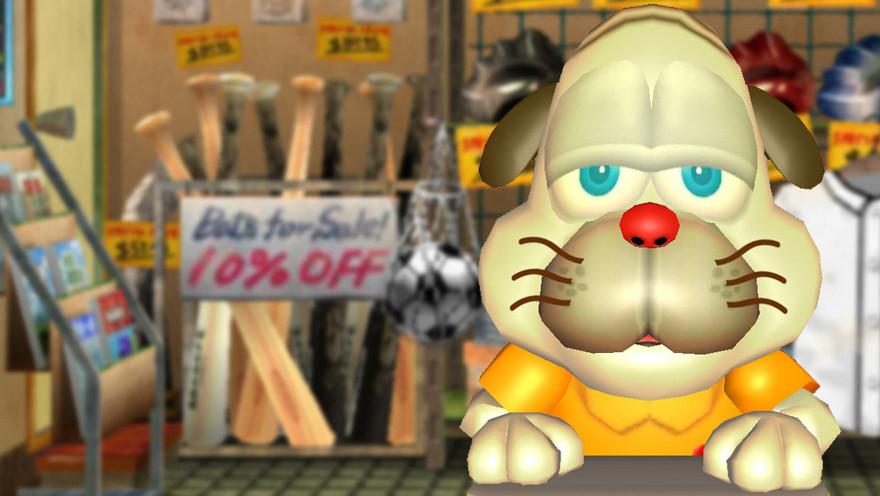 If I were to write seriously about the story in Rusty’s Real Deal Baseball, I’d start my review like this: “The first thing you do is select one of Rusty’s ten kids to adopt, easing the pressure on this single dad to feed and clothe his nine remaining children. That they are puppies and don’t wear pants does not lessen the effect; this is a game about the lengths we’ll go to skate by when faced with desperation.”

But of course that’s not really the point. The story is less a narrative than it is a frame on which to hang Nintendo’s latest collection of stone-solid play mechanics shuffled into a single piece of software. What has received the most attention is how these games are doled out. In a bid to enter this strange new market reality where free-to-play games earn millions every day and titles bought for ten bucks are considered expensive, Rusty’s Real Deal is a free 3DS download, and each mini-title is bought individually.

Rusty is a shopkeeper with bills to pay and ten baseball-themed games to sell. (The cartridges play on your new “Nontendo 4DS.” Cue rimshot.) But before you buy them, you haggle him down in price. Listen to his tale of marital woe and he may feel heartened enough to knock off a dollar. I’d hoped this new approach to in-app purchases would be revelatory: a pay system based on emotional connection and feelings of guilt is a fascinating direction in which to take what is often a cynical model based on addiction or haste. Alas, Rusty’s monetization is the least interesting part of the game, with each barter traveling a linear path down to a pre-set lowest point. It’s funny—early on you give Rusty a Pompadour Wig so he feels more confident at his Cooking Class … fifty cents off!—but it’s less a conversation than it is a fill-in-the-blank quiz.

Still, this game is not about how you acquire it. Nor is it about Rusty himself. It’s about the sweet crack of a bat against rawhide. It’s about the thwoomp of a ball smacking leather. It’s about the unexpected joy of watching a slider graze the outside corner of the strike zone and calling out, “Stiiiiiiii-rike three!” If you truly love playing baseball, and not just watching it on TV, this may be the best baseball game ever made.

Nintendo has made baseball games before. Ken Griffey Jr. Presents: Major League Baseball for the SNES holds a cherished spot in this writer’s memory; inserting my friends into the Montreal Expos line-up was a highlight of summer 1994. Baseball was a launch game for the NES back in 1985. Even before they made their first videogame, though, Gunpei Yokoi designed a toy in 1967 that tossed one of ten soft baseballs to a batter; Nintendo deemed it the “Ultra Machine” and sold over a million. Yokoi would go on to invent early forays into handheld gaming like the Game & Watch and a little grey brick called the Game Boy.

It’s fitting, then, that Nintendo would bring this new take on baseball games to their latest handheld, in effect merging their early efforts into one piece of software. Rusty’s Real Deal Baseball is a strange hybrid: a collection of ten dastardly arcade games based on individual skills, such as swinging a bat, catching a ball, or even calling pitches as an umpire. But it’s also a paean to the past, as each of the games features the Ultra Machine, though not as Yokoi ever envisioned it: the red device stands in for the head of a man or woman in a business suit, who then tosses slow pitch or stands at the plate.

Rusty’s Real Deal harks back, too, to Yokoi’s Game & Watch titles: seemingly tiny affairs that blossom as time is spent honing your skills and pushing for higher and higher scores. The first game you unlock, “Bat & Switch,” is a simple batting exercise: The only instruction is “Press A to swing.” Your Mii stands over a sandlot home plate while the Ultra Person tosses underhand balls in your direction. You simply swing away. It sounds basic, dull even. But miniscule changes in timing are accounted for as you spray a realistic array of frozen ropes, grounders, and towering fly balls across the diamond. These are counted up as three distinct types of hits: a dribbler that thuds off the bat, worth one point; a solid shot worth two points; and a smooth stroke that cracks the ball deep into the grassy field, that sharp “Ping!” registering only when you connect directly in the sweet spot on your bat.

Here is where the euphoria comes in.

Each single game offers fifty different challenge levels across five different modes. Do well and unlock a Hi-Score Derby that asks you to rack up the highest score possible. And here is where the euphoria comes in. Most Challenge levels ask you to score a certain amount of points and then stop. After such a fragmented experience, the game takes the shackles off, asking you to perform a single action well, over and over, as long as you can.

An Ultra Machine-headed woman in a suit flips a ball softly your way. You swing and crack it deep to right. Another ball, another hit. There is no music at first, each swing reverberating through the air. Birds chatter back and forth. A car horn honks in the distance. You keep swinging and connecting. The pace increases. That your practice-partner is a woman wearing heels whose head has been replaced by a 1960’s Japanese pitching toy does not diminish the intensity. She keeps tossing balls your way. You swing and connect again. Background music slowly increases in volume. Your vision becomes a tunnel: all you see is the bat hitting the ball. Outside this focal point everything is hazy, smudged. Now the music is really going, percussion snapping, electronic horns blasting out a jazzy motif. You swing and connect, you swing and connect. You’ve hit 78 in a row.

And here the mutant woman pauses, before lobbing a slow arcing ball your way. You swing too quickly, missing. But there’s still time; you swing again and crack the ball before it lands. But she is a cheeky pitcher: Now another ball comes in crazy-fast. Your timing is off. The spell’s been broken. You miss. A whistle blows. You scored 79! But you can do better…

I bought “Bat & Switch” for two dollars, haggled down from its starting price of four. I would have paid three times that. Nine other skill-games are present, including one called “Bat Master” that has you carve your very own bat out of wood. You never play a nine-inning game. If other baseball videogames are about the simulated experience of a professional season, Real Deal returns us to a younger, hungrier age, when baseball meant bat-speed drills and repetition, another cold spring afternoon spent outside taking grounders, until an amateur’s love becomes honed over time into mastery.

This is the National Pastime deconstructed. This is also Nintendo’s past commingling with its future: A perfect, tiny game, forced into this strange new shape and sold piecemeal. That the selling becomes part of the experience is a nice-yet-flawed touch. But they’re learning. And with new competitors and a lessening foothold amongst players today, they’ll need to. Maybe this is a game about desperation after all.