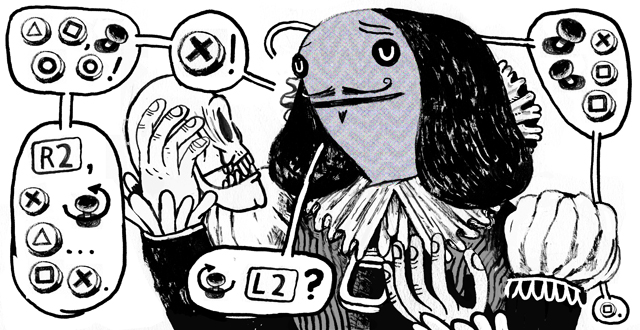 Helen calls them the “Hurrah!” buttons. L2 + R2 + both analog sticks held upwards. Whenever she wins the most points on a LittleBigPlanet level, she presses these buttons, and her grinning Sackgirl lifts both arms in the air in wordless celebration. My Sackboy, meanwhile, tends to scowl and storm off the side of the screen, fists clenched. Or, after a particularly stressful level, he might pull out a frying pan and hit Helen’s Sackgirl over the head. Helen tends to take losing slightly better. She will drag my Sackboy away from the camera, mid-disco dance, in a vain attempt to take the spotlight. Either way, nigh every level ends in a comical scuffle between our characters without a word spoken between us in the real world.

Communication between players has always been somewhat extrinsic to videogames, whether between two players sitting in the same room or eight players on different continents talking over headsets and typing out abbreviated lines of text. Despite being a pivotal element of most multiplayer games, communication happens beyond the borders of the game’s fictional world.

This is hardly surprising. Few games have enough spare buttons on the controller to allow for all the complexities and nuances of language. Yet, as players talk to each other, the coherency of a game’s world begins to stretch. A colorful wall of text at the bottom of the monitor, or the barking of a teammate’s dog through the headset’s earpiece, can pull the player out of their character and out of the game’s world.

But if communication can infuse the actual gameplay, as in LittleBigPlanet and its recent sequel, the seams of the world tighten. The player’s bond with their character grows and their immersion in the game is strengthened.

With few buttons needed for the three simple gameplay verbs—run, jump, grab—more than half the PlayStation 3 controller remains to supply the player and their Sackperson a vast array of gestures. My Sackboy can be made to smile, sulk, scowl, or gape in fear; both his arms can be moved independently (with his fingers taking different shapes based on his facial expressions); he can nod his head, shake his hips, and look around in all directions. I can combine these motions in countless ways to formulate a simple visual language, one that removes the most complex element of communication: words.

Instead of Helen telling me to “go over there,” and pointing at a corner of the television screen, Helen’s Sackgirl herself points at a switch within the world and my Sackboy goes there. When he finds the wrong switch, Sackgirl shakes her head angrily and points again. This time my Sackboy gets it right, and Sackgirl grins and gives a thumb up.

These complex interactions between players and characters blur the borders between language and gameplay. Much like every other element of LittleBigPlanet‘s aesthetic, communication is rendered tactile and tangible within the game world. Just like the cardboard car with a cellophane windscreen, or the stars dangling from the sky on strings, you can see the dialogue between the characters.

LittleBigPlanet 2 takes things a step further by occasionally, perhaps counter-intuitively, removing Sackboy’s gesture-based language from the player’s control to use it in cut scenes. While other non-player characters talk or use on-screen text bubbles, Sackboy and Sackgirl still rely on gestures and facial expressions—ones scripted by the level’s creator, not the player. They’ll quiver with fear when a dragon flies overhead; they’ll smile like goofy dogs when they save a planet.

Sackboy’s wordless language is thus formalized. It is not just something the player does in the absence of a headset, but is rather the actual language of the character, as much a part of Sackboy’s repertoire as jumping or grabbing.

The real joy of LittleBigPlanet has always been watching your Sackboy or girl interact with their very tangible world, one knitted together and fastened with masking tape and Velcro. This world hides nothing from the player. Just like every wire, every sensor, every nut, and every bolt, language does not hide in the shadows of the game’s code—it is right there on the screen, as real as the stitches in Sackboy’s arms. The player just has to hold down R2 to reach out and touch it.