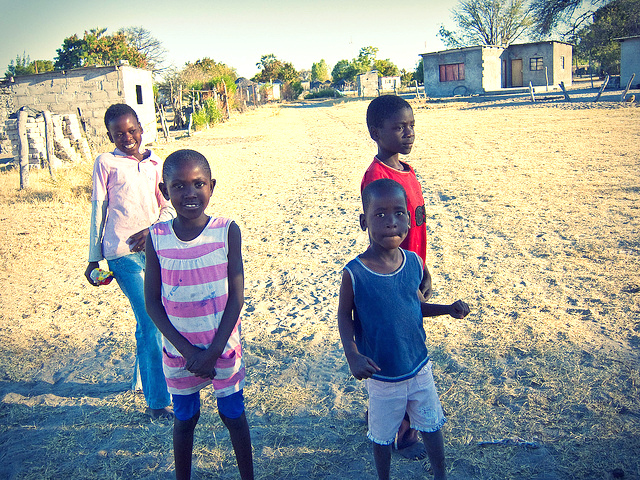 It’s no secret that social games like CityVille have a seedy underbelly, relying on casino schemes to keep players pumping in e-bucks and spamming friends. But now that there is a social game that purports to correct the social ill of poverty in the third world, you can feel better about idly wasting your workday. Safari Challenge is a game on Facebook for social change. It hopes to bring playgrounds and running water to rural African communities. After adopting his daughter in Africa in 2006, the game’s creator Jacob Bonnema teamed up the charity Kids Around the World, a group who builds playgrounds in places like Ghana and Dominican Republic from refurbished materials, and the result was this game.

While a great initiative, Safari Challenge has to be one of the least effective ways to make an impact ever.

It is very much a Facebook game, complete with the generic cuteness. When I start it up, I’m immediately placed under the tutelage of a cartoonish middle-aged white guy standing akimbo in a safari cap, scout uniform, and black sunglasses. The game is rough around the edges, with broken English abound and the most egregious typo ever: “Change The Wolrd.” I’m told I will be collecting “Impact,” and that it can be exchanged for a donation towards real-life projects that will benefit the lives of kids in Africa. There is a photo of the kids that pulls at the heartstrings.

Clicking on my camp in Botswana, I’m confronted with an empty, isometric plain. I start building a tent with the help of my trusty elephant. From this tent emerges a glistening medallion, which makes a pleasing slot-machine “da-ling” as it’s being added to my coffer.

Before long I have a thatched hut and a drinking well. The elephant isn’t doing much, so I drag him into an encyclopedia, per instruction of the arrow, and he horumphs. There’s no need to fret because I’ll soon be “growing” a stampede of baby elephants, or so I’m told, which somehow doesn’t sound right. I’m basically running an endangered species farm.

Enough with the monkey business! I’m here to help the kids. The Impact button takes me to a menu where I can make a donation that, from the looks of it, will in a million years build a playground for the kids. I put the fifty points I started with into the pool. 54,532 points have been donated in all since the game launched on Tuesday, but the meter has barely budged. This is probably not a good sign.

The meter has barely budged. This is probably not a good sign.

Earning Impact is a corollary of buying sapphires and coins with Facebook credits, and the exchange rate for diamonds to dollars is roughly one to one. The unfortunate youth of Africa hang in the balance while I invite my friends to play, make in-app purchases, and, most importantly, breed elephants — usual social game shenanigans.

Checking my clock, I’ve already been playing for thirty minutes. It looks like it will take at least several days before I’m ready to make insignificant contribution of a couple of bucks. At this point, I’d do better to look up a charity and cut them a check. Though it’s a fine cause, Safari Challenge is a laborious game for people who have nothing better to do or who need to be suckered into donating. It’s kind of sad. But maybe something good will come of it.

The problem I have overall with Safari Challenge is just that it’s manipulative. This of course is nothing new for games of the free-to-play ilk. Their general strategy is to let you have just enough fun before asking you to pony up. It’s a questionable business-model to begin with, causing some talking heads to compare the social game giant Zynga to a drug dealer who gives the first dose away for free. Yet, when I’m being manipulated into doing a good deed, it feels even more condescending. But if I complain about it too much, which I already have, I become the enemy of man. Okay, fine, I’m playing. I’m playing…