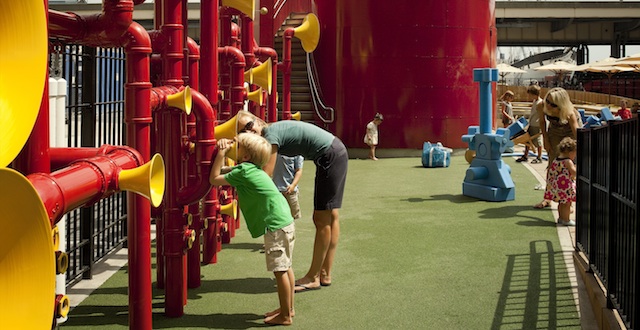 Landscape architect and designer David Rockwell’s Imagination Playground, located in southern Manhattan, has been lauded by architects and educators as a cutting-edge experiment in learning and play, and by kids as “super fun!” We caught up with the renowned designer of New York’s W Hotel and the interior of the new jetBlue terminal at John F. Kennedy International Airport to find out more about using “loose parts” to give children power over play, the forgotten power of a park bench, and magic tricks involving his pet hamster, Hermit.

Definitely the sandbox! Although the others are fun examples of traditional fixed playground equipment, the sandbox allows for limitless possibilities, collaboration, and creativity.

Describe the last time you played on a playground.

I’ve been playing a lot these days! It started when my kids were little, and since developing my own playgrounds I have had the joy of experiencing and witnessing kids’ play rather frequently. It is always so inspiring to see how children do what they do best.

Describe your favorite playground from when you were a kid.

My favorite play space was actually my garage when my family lived in Deal, N.J. My brothers and I used it as our fantasy clubhouse, and were constantly transforming it.

Describe your favorite toy when you were a kid. Do you still have it?

I made a lot of my own toys from found parts around our garage, which we used in our fantasy clubhouse. We created a spook house in the fall, with hollow core doors and roller shades and all sorts of other elements we found lying around. I also loved magic tricks and toys—my favorite was the disappearing dove trick that we used my hamster Hermit for!

“Probably the most overlooked piece of playground equipment is the park bench.”

Describe your ideal setting for a playground.

The most amazing thing I have found, in my recent experience with play spaces, is that they can happen anywhere. As long as it’s a safe surface, there are endless amounts of places where play can thrive, from a park, to a schoolyard, to a gym, to a patch of turf.

What are some of your favorite public play spaces right now?

There are very few adventure playgrounds in America, but some of the ones that we looked at for inspiration for Imagination Playground were Richard Dattner’s Ancient Playground that he built in Central Park in 1966, and the Adventure Playground at the Berkeley Marina in California, built in 1969. In New York, we also looked at playgrounds that had innovative and inspiring landscapes and features, such as Underhill Playground in Prospect Heights and Teardrop Park built by Michael van Valkenburgh in Tribeca.

What inspired you to move into designing public play spaces?

It all started when I began spending time in playgrounds with my two kids, and noticed a lack of encouragement of imagination, creativity, and variation. These wheels began to turn just after a few public projects we collaborated on with New York City, and so we immediately turned to the City to partner with them on a playground initiative in lower Manhattan. After over five years of research, development, focus groups, and testing, we opened Imagination Playground at Burling Slip, which we conceived of and designed pro bono. Throughout this process, we also really wanted to turn our concept of child-directed, unstructured free play into a global initiative, so we began to create products that we could sell to schools, parks, communities, and even individuals.

What kinds of skills from your time as an architect and designer have you found particularly useful in creating the Imagination Playground? What skills have you had to learn during the process?

I really had to hone in on the basic foundation of why I became a designer, because I love to dream and build. Of course my extraordinarily talented team of architects and industrial designers used their finely tuned skills to prototype, study, and develop the playground, but so much of what we learned came from observing kids playing, and figuring out what basic shapes, forms and tools would best encourage unstructured, child-directed free play.

In particular, what were some of the inspirations for the design of the Imagination Playground?

We spent years designing the signature Imagination Playground Blocks made of biodegradable bright blue foam, which come in 20 different shapes and sizes. These blocks, along with crates, fabric and carts, among other loose parts, encourage children to build, rebuild, and create their own narratives and ever-changing environments.

At the Imagination Playground park at Burling Slip, our aim was to create features and loose parts that would integrate both physical and imaginative activity. There is a long ramp, sandpit, a slide, cascading water channel where kids can build dams, a rope-climbing structure, and masts and pulleys to echo the historic marine environment of Burling Slip. Inspired by the commercial activity that took place at historic Burling Slip, loose parts such as burlap bags, buckets, shovels, brooms, carts, and fabric are to be incorporated within the play activities. And to reflect the proximity to the East River, buckets, sandbags and wooden dams have been integrated into the water play.

Describe a piece of playground equipment that could be used by a 10-year-old, a 30-year-old, and a 60-year-old at the same time.

Probably the most overlooked piece of playground equipment is the park bench. An essential part of play is observation and reflection, particularly for children to let their minds organize what they have physically imagining on the playground. But watching play is important for all ages and connects us back to what is essential and fundamental about play: the freedom and possibility to imagine.

We want people to experience complete playful immersion while in our playground, and to leave feeling tired and curious.