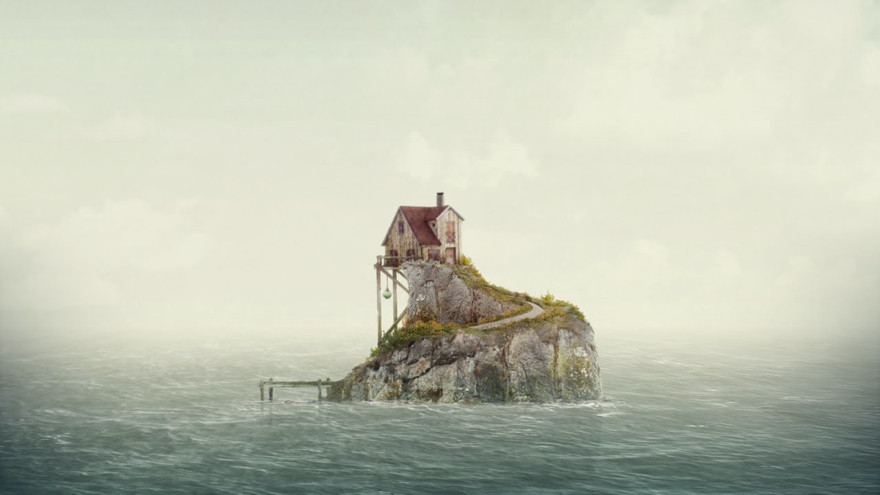 Most people misunderstand labyrinths. They picture that most famous labyrinth, that of Daedalus, Theseus, and the Minotaur: winding, deceptive, a tangled mass of crawling caverns and halls, each connecting to nothing, leading nowhere, and full of monsters. A prison with no doors. But as it turns out, this most classical of labyrinths is not actually a labyrinth.

In truth, what defines a labyrinth is that, while its path may be long and winding, there is only one path to the center, and so there is no getting lost. No turning is a wrong one, and every road leads inward. A church in my hometown has built a labyrinth out in front of their office, its “walls” made of knee-high shrubs. Each day, people walk its winding path, turning in and in as they walk again and again past the same landmarks. At the center, they turn again and walk out, seeing the same things from a different direction. In this way, a labyrinth is meditation, contemplation, a slow, deliberate exploration of an eternally interior space.

I have yet to decide whether The Sailor’s Dream is a game, but I am certain it is a labyrinth.

The dream the game invites you into is an oceanscape, which you scroll through to find locations to explore. The spaces are all beautiful, detailed, and appropriately dream-like, with whimsical names like “The Seven-Song Cottage” and “Celestial Sanctuary.” As you choose your destinations, the sound of lapping waves is accompanied by tinkling bells, and something much more sedate and lovely than you will imagine when I say “a whistling banjo player.” The music is perfect, communicating exactly the feel and tone of a quiet, empty day at the seaside, with just a hint of melancholy.

The elegant interplay of sound and scene is what The Sailor’s Dream does best by far, and each location is filled with small vignettes where audio and visual dance around each other beautifully. Each dreamlike corner of the game’s landmarks has its own aesthetic and dynamic, and offers you the chance to weave your own sounds into and around the game’s music. In the Pale Cube Hallway, for example, six lanterns hang from the ceiling, and tapping each plays a different note. The lanterns are tuned in key with the guitar and piano which provide the background music, and so it is an easy thing to sit and pluck the lanterns like strings, adding your own melodies and harmonies to the base of the game’s music. There are many rooms like these, each offering a different way of entering into the game’s music. If you are of a mind to, you can easily wander for hours through The Sailor’s Dream making music, playing it not like a game, but as an instrument.

Elegant interplay of sound and scene is what The Sailor’s Dream does best.

Within these locations are artifacts, small relics of the Sailor’s life, that give us clues to the game’s story. In the Pale Cube hallway is an empty picture frame, that leads to a short description of a scene. Many locations have similar artifacts, each leading to a small piece of story. A girl stands by a window, though she’s not supposed to. A woman sings a lullaby. The game sees these vignettes as important, leading to perhaps its weirdest feature: a print dialog box, which (of course) has its own soundtrack. As you explore the locations of the dream, more and more pieces of the story are revealed through these small artifacts.

I think this is supposed to be the game: taking these little snapshots of memory and piecing them together to make a story, to make a life, to make meaning. It is clear early on that this dream hides a tragedy, but here I feel The Sailor’s Dream does not quite deliver—or at least, it has not delivered yet. These snippets of story each describe a young girl, or her mother, or her absent, seafaring father, but having come as close as possible to finishing the game, I still can’t say with certainty whose dream we are in. I don’t feel I know what happened to this family.

And perhaps this is simply because I haven’t spent enough time in this dream. The Sailor’s Dream wants to be a space for exploration, for slow, deliberate contemplation, and for that the game demands time. When I say that I have come as close as possible to finishing the game, I mean that it is literally impossible to complete the game in a sitting or two (or six). The game uses time to unlock content in some interesting ways best left unspoiled, but I will say this: having wandered in and out of this labyrinth for several days now, I still have not seen—and especially heard—all that is stowed in the secret places of this game.

When I picture the labyrinth of Daedalus, the image in my mind is not unlike many games. I am wandering, expectant, down confusing halls, making turn after uncertain turn, both anxious and eager about what might be around the next corner, always ready for a fight. And for all its similarities to roguelikes, dungeon crawls, and close-quarters first-person shooters, those games are not labyrinths either. If that is what you are expecting from a game, you will be disappointed here. If you are looking for a space to contemplate, a place to linger, a path to walk in patient consideration, you will find yourself at home in The Sailor’s Dream for quite some time. And in the moments when you are not playing, you will hear the voices within the labyrinth sing to you.