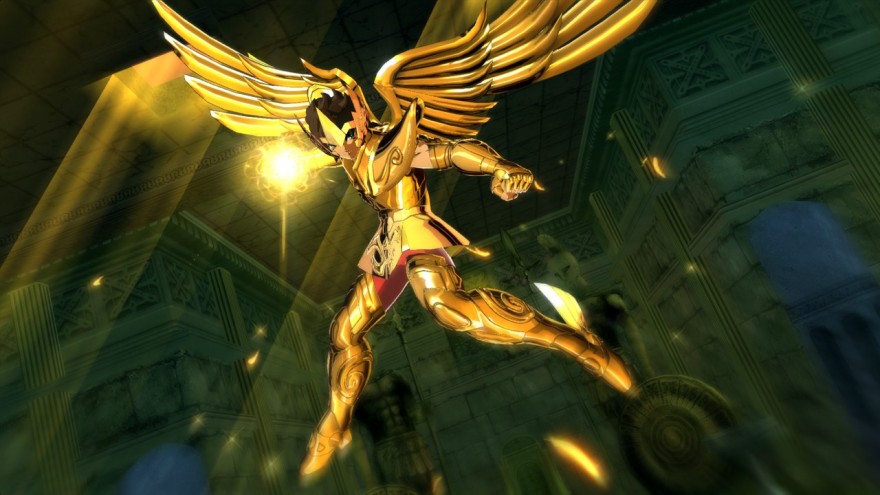 The saying “keep it simple stupid,” coined by U.S. Navy engineer Kelly Johnson, posits that one should avoid over-complication, instead favoring simplicity in design. The KISS principle believes that unembellished systems work best, and intricacy does not necessarily translate to quality. It is a design construct many fighting games do not wholly take to heart, opting for convoluted plot lines, florid combat mechanics and a vast amount of button combinations for players to internalize. In competitive circles, players are lauded for achieving impeccable intricacy in form and tactics, combining a dizzying slew of offensive, defensive and evasive maneuvers. Only chumps play cheap.

Saint Seiya: Brave Soldiers is a game that, at first, seems drowning in ornate embellishment, simultaneously dazzling you with a flurry of frenemies, guard-breaks, and “Big Bang” attacks. But, once I looked past the flamboyant presentation and eschewed the game’s more complicated mechanics, I not only found myself having more fun, but playing the game a whole lot better.

I was being cheap, and loving it.

I would rather be a cheap villain in the local arcade than lose my quarters.

First, I should mention that I’m not all that great at fighting games. My tactics are serviceable at best. I’ll muddle my way through the main campaign, but my modest success starts to wane once I take on proficient players. I can, at times, find that one character who clicks with me, and when I do, I usually stick to that fighter exclusively. My opponents have called this tactic “cheap,” while I argue it is smart. Maybe its the 10-year-old in me, but I would rather be a cheap villain in the local arcade than lose my quarters because I stopped beasting Blanka’s electric thunder move. I don’t want to lose, so if you can’t figure out how to stop me, its your fault. Like I said, I’m not all that great at fighting games.

While bruising my way through Saint Seiya’s early stages, I initially found it hard to find my groove. The game’s combat is overflowing with visual flair, with bodaciously-adorned dudes zapping about the screen unleashing blasts of wonderfully stylized attacks. It’s all beautifully over-the-top, and combat presents itself in a zany, frenzied style. But behind all this optical ostentation laid a single combat mechanic I’d soon come to covet, almost exclusively, over all the rest.

It had not looked good. Though there are just three basic moves—combos, throws and burst attacks—make up offense, and each has a unique advantage, they work to balance out cheapness. Spamming burst attacks drains the cosmo bar, which can then only be rebuilt either by landing combos, blocking attacks or running off into the corner to recharge, which also opens you up to attack. Going full-out on combos is quick, but easily builds up defensive enemies’ cosmo bar and can turn fighters into guard-breaking super saiyans. It looked like I wasn’t going to find my Electric Thunder.

I muddled my way through the early part of the game, never achieving mastery over one single component. I was landing break-falls and well-timed throws with dumb luck, defeating opponents in an unimpressive, workmanlike fashion, scoring B and C ratings. Just my style.

But when I faced more aggressive foes, I found myself increasingly relying on a single move—an evasive maneuver only available during the midst of a pummeling which breaks an opponent’s combo by zapping you behind your foe. This dodge eats up the cosmo bar, so it had to be capitalized on quickly to rebuild the meter. Following it up with basic attack combos—ones achieved simply by mashing the attack buttons—avoided draining the cosmo bar further and ensured I always had enough energy to pull off the evasion. I began relying almost exclusively on this tactic, basically doling out just two moves repeatedly. The first round I stuck to this simple approach, I achieved my first S ranking—a rarity for me in fighting games—and it was the first of many to come.

Luring an opponent into offense only to juggle them into a round-winning combo was just too much fun.

Combat became only about timing, baiting my opponent into attack and punishing him for doing so. Flashier moves felt superfluous; I had reduced combat to a single element. By limiting myself to these straightforward tactics, I was able to focus on better execution. Sure, I could fumble my way through the more nuanced aspects of this fighter, but luring an opponent into offense only to juggle them into a round-winning combo was just too much fun. I decided I would play cheap, and the game—perhaps inadvertently—continually rewarded me for it.

If you were the arcade devotee who sunk a month’s worth of allowance into a cabinet in order to perfect the timing of your Dragon Punch, this title probably won’t serve up the kind of finespun fisticuffs and strategic depth you’re looking for. However, if you hoarded your quarters by spamming hadoukens until that other kid showed up, Saint Seiya offers plenty of satisfaction for you to glean from the cheap seats.