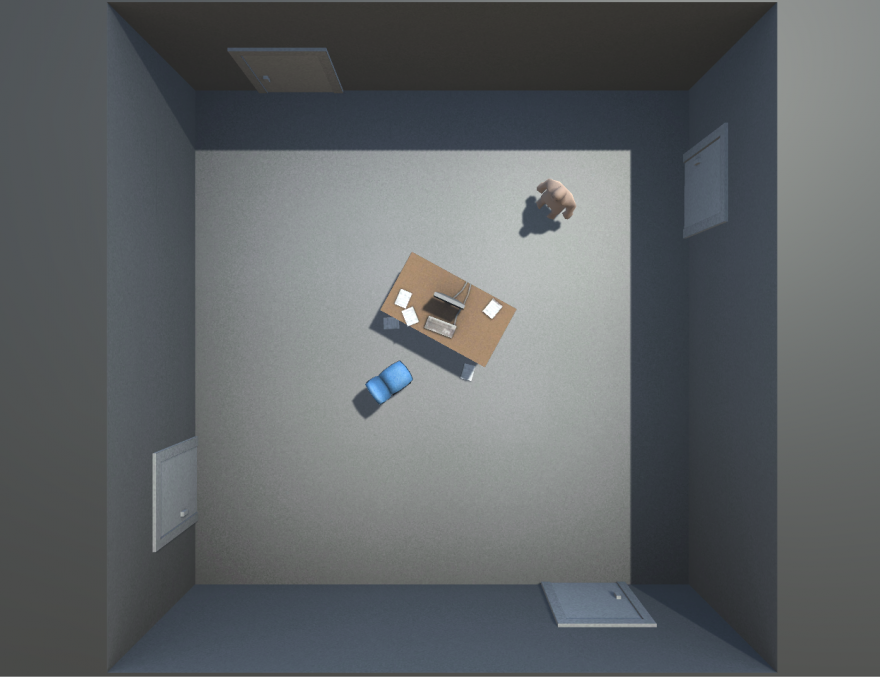 Videogames about the drudgery of working in a dead-end job, pushing piles of paper off a desk, are as old as, well … almost as old as videogames. One of the first was probably Takeshi no Chōsenjō, the 1986 game directed by Takeshi Kitano (known for the game show Takeshi’s Castle as well as starring in and directing his own films), which began by having you roam a Japanese city working as a salaryman. You stuck to the dull daily routine of a salaryman until you quit the job and worked out what else you could do.

But Takeshi no Chōsenjō wasn’t meant as a game with artistic aspirations—it was the opposite. It was the product of a man who confesses to hating videogames and therefore wanted to make the worst one he could. Hence he made the game experience more like everyday work; as far away from the fantasy lands of other games as possible. A game that’s more widely recognized these days for its depiction of the daily life of an office worker is Molleindustria’s 2009 game Every day the same dream. In fact, it seems to have served as the blueprint for the many copycat titles that came after it.

The monochromatic repetition of Every day the same dream captures the soullessness associated with working in a cubicle. You get up, travel to work, and then sit down for hours at a time in front of a computer, typing out the days for a corporation. It’s a line of work without passion, that treats workers like robots, and that revolves entirely around work output. Salaryman blues are real and it’s the anguish that underlies the economic machines driving our societies.

Given the easy looping of the salaryman’s day and the obvious iconography it carries, Every day the same dream has served as a blueprint for many copycat titles that came after it. It’s now a ‘type’ of game; a staple of art games. It’s too easy and obvious these days to make a game that essentially has the message: life working in an office is pretty shit. But The Employee, a game made for Ludum Dare 37 by Paul Lawitzki, is more efficient than most, so much so that it’s worth studying.

the walls and doors never changed

Lawitzki’s trick is to use a single diorama to draw attention to the monotony of the salaryman. It operates with a theatrical quality: the salaryman wakes up on the floor, turns off his beeping alarm, and exits stage through one of the four doors (one on each wall). However, he then immediately emerges from the door on the wall opposite to the one he entered, and the set in the middle of the stage is flipped through the floor to turn it from a bedroom to an office or a lunch hall. Through these three scenes the entire story is told, the walls and doors never changed, so that it all takes place in the same grey room.

This stylistic and formal choice is born out of the theme of Ludum Dare 37—”One Room”—which encouraged participants to set their games in no more than a single enclosed space. What Lawitzki turned out was a game that uses this restriction to create a work about the inescapably bland architecture of the salaryman’s life. The established narrative is told once again but, as said above, with a new efficiency. Henry Ford would be happy with this production. As the tragic repetition of the salaryman requires, the loop of The Employee goes on forever, until you decide to quit, at which point he keels over and dies—of course, the only escape is death.

The only other formalistic flourish that The Employee boasts can be seen in the shot below. And as you can see it’s a little on the nose: a Windows warning box appears at each of the doorways with the words “No Living Space” and “D[e]spair.” You should get the idea. All work and no play makes Jack a dull boy and all that.

It’s a shame that these feelings are so blasé these days as it means they’re becoming more universal, more and more people stuck in jobs they hate, unable to escape either metaphorically or physically from their salaried prisons. It is perhaps this that is encouraging a number of people to make games that focus on nature, growing plants in domestic spaces especially; tributes to the small joys that can be found within the urban loop.