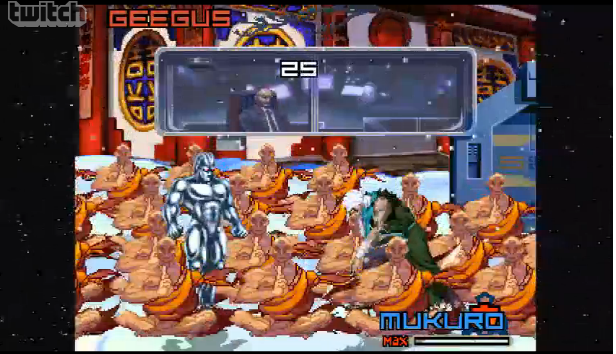 Depending on who you ask, there is one of two things you need to know before you start blowing that wad of Salty bucks. a.) Always bet on Dragon Ball Z, and, b.) never bet on Dragon Ball Z. Both are terrible advice, but don’t sweat it. It won’t save you when the Google logo is vis-à-vis with Reptile, the acid-spitting palette-swap of Scorpion from Mortal Kombat. Matches like these are over before they begin. The Google logo, though bulky and big, is a “potato,” seemingly quadriplegic. It allowed Reptile to launch it into the overhead spikes at will, the word “Fatality” scrawling across the screen. Thirty seconds later and the algorithm was queueing up the next travesty.

This is not a fever-dream of my thirteen year-old nephew. This is Salty Bet’s Dream Cast Casino, the unholy copulation of a 4chan post and a cockfight. Salty Bet is an online fighting game where automated bots battle other bots 24/7. The audience cannot directly participate, but they can bet fake money, and jeer “POTATO” at inept bots. These seem to be people with questionable upbringings—your NeoGAF and Something Awful and Reddit hangers-on—who gather by the several-of-thousands at the nihilistic epicenter of the web, where pantsu and Thriller and an Everything is Terrible! meme of a kid churn in a queasy disarray.

When taken broadly, Salty Bet could be the defining statement on internet id as it has existed up to this point through history. For one, it’s endless, mindless entertainment, as is most of the ‘net. The community is marked with feigned idiocy and vitriol, the antithesis of communities that exist off-line, except maybe in West Virginia. It has a thriving virtual economy though it doesn’t sell anything (aside from the premium status of “Illuminati”). And it is kind of beautiful. It could be one of the first true artworks to emerge from the Information Age, a work to rival the frivolousness of Warhol and the social prefiguring of The Oresteia. That may sound like hyperbole, but it is one of the few times since the dawn of broadband that using the internet feels like participating in a cultural moment, opposed to watching the news slip down the news stream.

Salty Bet, like all good things on the internet, sprung up from a string of fortuitous coincidences.

Part of the beauty is in the sheer randomness of it all; how the music and the backgrounds and the two-thousand-and-then-some combatants are dialed up and spat out without rhyme or reason. (That said, there are weekly tournaments on Thursdays.) Many of the characters are distinctly Japanese and will only be familiar to connoisseurs of obscure fighting games, manga, and dojin. I’ve had the stream running in the background constantly while preparing this article and the cast of winners and losers have included Green (Power) Ranger; Oda Nobunage; Sakura Kinomoto; Glacius (of Killer Instinct); Krillin; Yamiyuki; Superman (who got his ass spanked); two different Flashes; Lupin the 3rd; a chibi version of Cammy (Street Fighter); Doraemon; Blossom and Bubbles (Powerpuff Girls); Doctor Robotnik in his “Stupid Little Drill Tank;” and Daimajin, a lesser-known kaiju. I don’t know who half of the characters are but I can assure you that there is a copyright being infringed upon somewhere.

No individual could orchestrate this madness—at least without being flagged by Homeland Security. Salty Bet, like all good things on the internet, sprung up from a string of fortuitous coincidences. At first, the hub was intended to allow fighting fans to place wagers while watching fighting tournaments on Twitch TV. Then, the interface was hooked up to a build-your-own-fighter engine called M.U.G.E.N., freeware that originated on MS-DOS in 1999. Thus, there is a huge reservoir of fighting characters for the organizers to pluck from, both home-brewed and ripped directly from commercial games. All they do is plug them into the software.

Not much is known about whoever is pulling the strings other than he or she goes by Salty. Not that that’s important. What matters to the peanut gallery, aside from really dorky-looking emoticons, is the gradual accruing of Salty bucks, and that means knowing whether Pikachu or Vanilla Ice is more likely to win. In order to tell the scrubs from the gods, serious users have tallied the results on long fact sheets. It’s generally accepted that Omega Tom Hanks, Barney (yes, the “I love you, you love me” Barney), a cat-girl of the eroge Tsukihime, and any character from the bullet-hell series Touhou Project are among Salty Bet’s finest. Google is quantifiably the worst. But between here and there are myriad intangibles. In order to narrow it down, countless users have tried creating bots to scout the characters. One such attempt, from a blogger at Giant Bomb:

– Allow betting from inside my application.

– Setup a database to track as many statistics as I can in order to predict fight outcomes.

– Attempt to find a way to handle characters that have the same name. (Not going to actually happen.)

– Make it so I don’t have to log into SaltyBet.com every damn time I open to application. (Screw it.)

I’ll concede that the whole enterprise is pretty pointless. Salty Bucks do not convert into real cents, and as it stands they cannot be spent on in-game perks either. When you think about it, a bunch of young adults programming bots and betting pretend money on intellectual properties that were stolen so that a computer could pit one against the other—that is the post-internet future not even Neal Stephenson could’ve foreseen. In the dot-com era, it was expected that money would cascade out of e-things. But after the crash, the piracy, the low returns on ads, and the trouble with owning an idea digitally, the internet had seemed to devalue everything. This dizzyingly wonderful live stream just might be worth it.