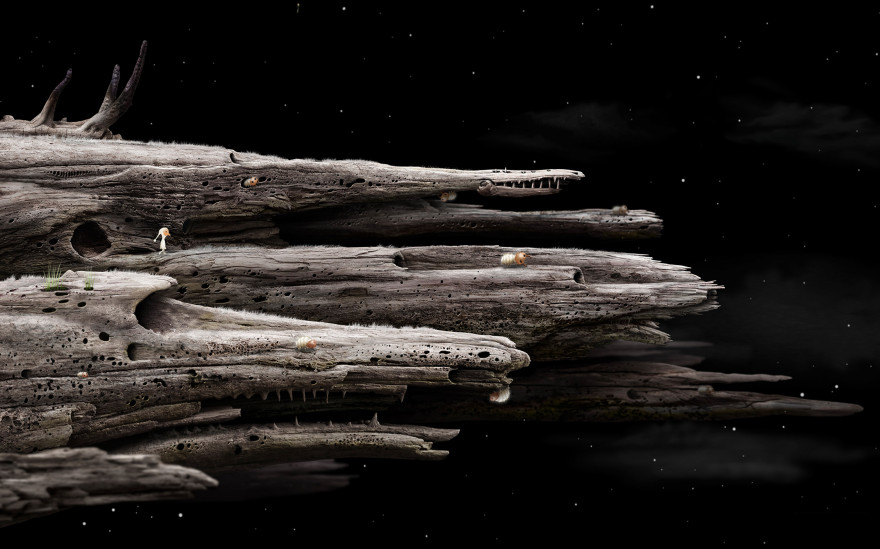 In a cabin near Walker’s Lake, in Mississippi, there’s a piece of driftwood that looks almost like a wolf’s head. From another angle, it appears as some bizarre sailing vessel, and from another still, it has the look of an alien weapon—perhaps a hybrid of a gun and a club. I remember turning it over in my hands as a child, curious as to why anyone would place an oddly-shaped piece of wood on a table as a decorative object. I hadn’t thought of that bit of ornamental flotsam for years, but it suddenly appeared in my mind when I began playing Samorost 3. The various planetoids that drift through the game’s version of outer space have the asymmetrical appearance of organic junk, decaying stumps and moss-claimed stones infused with extraordinary life to unlock their inherent aesthetic potential.

The most ambitious project yet from Jakub Dvorsky and the team at Amanita Design (which gets its name from a genus of mushrooms known for toxic and hallucinogenic properties), Samorost 3 bears the markings of a creative mind fascinated with unlocking the art behind man-made and natural throwaways. Even the title of the Samorost series points to Dvorsky’s curiosity with the peculiar shapes of the natural world. In a 2005 interview, Dvorsky stated that the title “samorost” is a Czech word that means “a root or piece of wood which resembles a creature; but it is also a term for a person who doesn’t care about the rest of the world.” Appropriately, both Samorost (2003) and Samorost 2 (2005) follow the adventures of a space-faring gnome as he travels to worlds of overgrown wood and rusted metal. A blend of manipulated photography and hand-drawn environments play host to bizarre and charming characters, all moving to the tunes of equally imaginative soundscapes.

Amanita’s most recent titles, Machinarium (2009) and Botanicula (2012), split this aesthetic blend of found object and organic material by designing worlds solely out of junkyard scrap for the former, and an enormous tree for the latter. Samorost 3, however, returns to the previous art design of blending the natural and technological worlds to construct fascinating environments hewn from broken stones and overgrown forests commixed with discarded bits of trash and rusted metal. Such a style finds a delightful playfulness by blending found object art, like the “ready-mades” of Marcel Duchamp, with the surrealist landscapes and creatures of Max Ernst. The world of Samorost 3 is, quite plainly, unlike any other I’ve encountered.

The world of Samorost 3 is, quite plainly, unlike any other I’ve encountered

The game begins simply enough with the gnome wandering around his own planetoid, his house a tower with a telescope through which he can gaze up at other planets and their orbiting satellites. Without exposition or dialogue, the player understands that mere curiosity sets the gnome on his quest for other worlds, and only by helping him build his rocket ship (from a living mushroom, a rusted panel, a bathtub, and plastic bottle) can he set off to explore the stars. This humble introduction equates the gnome’s wanderlust with the player’s own inquisitiveness, and, consequently, embraces one of the fundamental pleasures of videogames: simple exploration.

In fact, “simple” seems to be one of the driving philosophies behind Samorost 3’s design. Like most adventure games of its type, Samorost 3 strips the “point-and-click” template to its core without succumbing to cold, mechanical repetition. Solving puzzles mostly involves clicking objects in the environment in the correct order, but the reactions from the characters and movement of the environment after being prodded make the game stir with life. Poking and disturbing the bizarre inhabitants of Samorost 3 causes them to react in ways that seem unpredictable, until repeated clicks uncover hidden rhythms that connect them to their world in ways that feel organic. Moving cattails near a pond causes nearby reptiles to strike up a chorus, and tapping busy termites halts their work for a quick song of praise to their patron saint. Completing such puzzles, then, is of secondary importance to engaging with them. In a game about the virtues of curiosity and exploration, the act of clicking becomes a tool for observational science replete with wonder, constantly poking at the world to see how it reacts in unexpected ways.

That sense of discovery makes playing Samorost 3 feel far less like an adventure game and more like a naturalist’s excursion, documenting foreign flora and fauna to better understand the complex universe they inhabit. Helping a forager pick mushrooms, participating in a polite yet informal tea ceremony, feeding a giant anteater, and helping numerous creatures find the right tunes to sing; all inform a profound experience of that world. All of these characters move like incredibly-detailed cut-out puppets gliding across painted landscapes, each visual piece complementing the game’s commitment to straightforward storytelling without the tedium of exposition. A gesture from a hungry parrot tells the player it needs food. Subterranean gremlins covered in soot bounce anxiously, revealing that they need the right tune to work in sync. The game asks for the player’s attention instead of demanding it through the use of such subtle cues that I rarely found myself at a loss for what to do.

Even those moments that halted progress were more like opportunities to wander around the world than barriers obstructing play. While there is an overarching quest involving a selfish monk who wreaks havoc across these small planets, the gnome more locally acts as a naturalist studying foreign places. His motivation rarely extends beyond curiosity, and the various environments, creatures, and characters seem mostly indifferent to his existence. Any positive or negative effects on the world are mostly incidental. He looks at the world with a sincere desire to learn about it, turning over stones and toying with strange devices only to see what happens.

The result is a game that is endlessly charming. In playing Samorost 3, I’m not compelled to be the hero, nor am I tasked with solving difficult puzzles for any sort of self-satisfaction. The game asks something far more humble of me: my desire to experience another world. After I completed what seemed to be the main quest, the game rewarded the gnome (and by extension myself) with the ability to travel more easily among the small planets and their satellites. In other words, the prize for playing Samorost 3 is simply more Samorost 3.

It seems an appropriate reward because I’m not yet done with Samorost 3. I hope I never am. Even if I somehow uncover every secret, wander through every niche of that world, I’ll still probably come back to it if only to toy around with the sights and sounds of a natural world waiting to divulge its secrets to the patient and curious observer. Maybe the best way to play Samorost 3 is to play with it, to think of it as a bizarrely-shaped thing that prompts one to appreciate the ways oddities can spark and delight the imagination. At least that’s the way I’ll continue to play it, curiously wandering through alien environments, turning each sight and sound over and over in my head, very much like I once did with a strange piece of wood I encountered when I was young.