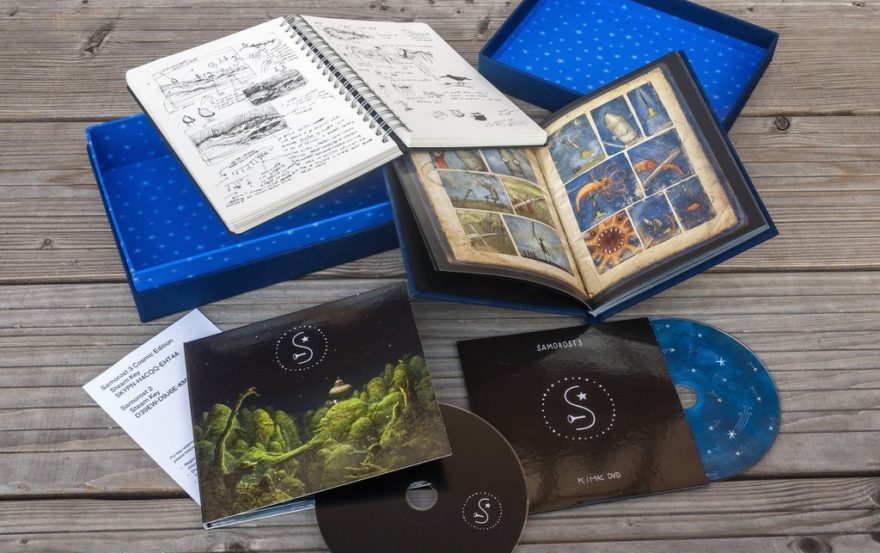 It’s only right that sci-fi point-and-clicker Samorost 3 gets a physical version. It’s a game that emphasizes tactility through its biological textures: from the gnarled knots of a planet made of tree bark to the soft sprigs of moss on one of its greener planets. The “Samorost 3 Cosmic Box” addresses this absence by giving you things you can hold in your hand alongside your purchase of the game.

Available now for $50, the Cosmic Box’s cloth-covered box has been partly hand-made (the rest handled by machines) in the Czech Republic. This is where the game’s creators at Amanita Design live, and also where they photographed insects, fungus, and plants found in local lush forests to use as the textures in the games. The aim of the Cosmic Box seems to be to bring the source of the game’s inspirations close to you.

To that end, it contains a cloth-covered book with two storybooks and a walkthrough inside. There’s also an art book included with black-and-white sketches of creatures and objects that made it into the final game. You can have a look at those books below.

The Samorost 3 soundtrack by Floex is also included in the Cosmic Box but only on a CD. If you want it on vinyl then you will have to make a separate $25 purchase. It includes two LP 180 gram audiophile vinyls, six art prints based on Samorost 3 by Adolf Lachman (which look real good), and a FLAC version of the album you can download.

If you want to hear a little bit of the soundtrack (and you really should) then you can head over to Floex’s online store for a quick preview.

If you haven’t played Samorost 3 yet then you should get on that. It’s a mostly wordless adventure about a space gnome who happens across a magical flute and sets out to find where it came from. It leads the gnome to several planets, each with their own woodland theme, where he helps out the locals and pulls off a bit of mischief to get by.

Oh, and if you do buy the Cosmic Box then you get Samorost 2 (2005) as a bonus so you can see how Amanita Design’s techniques and imagination have progressed in the decade between it and Samorost 3.