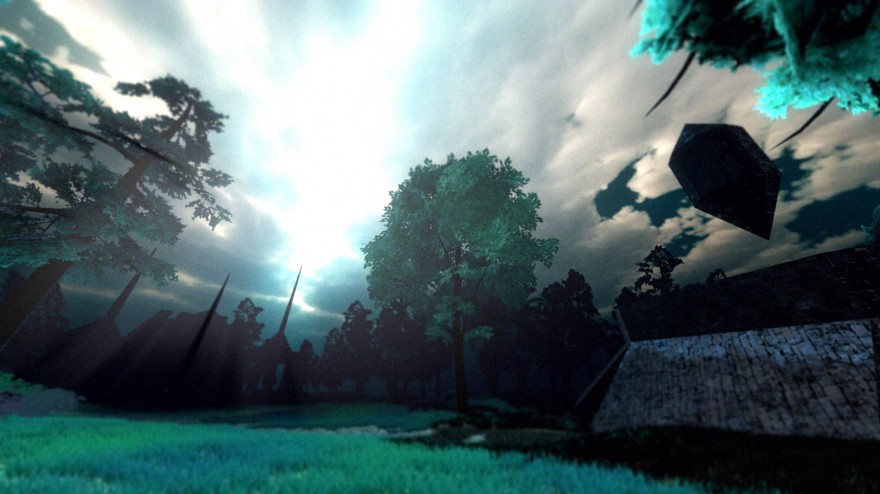 “Why are you treading on the grass, you dummy?”

I had that thought at least a dozen times while playing Sanctuary, Connor Sherlock’s synth-y, first-person walking simulator. There are dirt paths to walk on but much of the ground is covered by grass. Sometimes the shortest path to wherever you’re going, which is nowhere in particular, is to tread on the grass. The grass is sprouting out everything, even what appears to be snow, although it shimmers like something closer to crystal meth. As these crystalline formations crunch underfoot as if it were the crackling background noise of a vinyl record.

That is no accident. Sanctuary has all the crackling warmth of vintage media. Beyond the crunchy audio, its visuals have the artifacts you’d expect to see on old-fashioned film. There is, of course, more to Sanctuary than its artifacts. Its universe is luscious and full of rolling surfaces to amble over. What little hard architecture exists in this universe—a church and a bridge—is extremely simple. These structures are collections of blocks, only slightly more involved versions of Stonehenge. Nothing here will detract from nature.

And why should it? Sanctuary is beautiful albeit aimless. Its music, which feels like a deep cut from the “Late Night Tales” series, is perfect for getting lost in. It plays so long as you are walking. And so you keep walking, lest the music stop. There is no larger reason to go on, you have no higher purpose, but this one feels high enough.