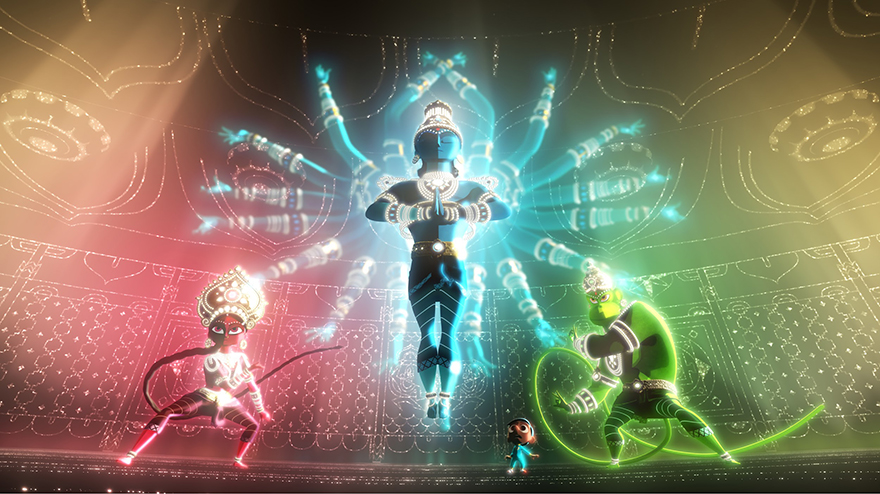 Pixar’s Oscar-nominated animated short Sanjay’s Super Team (2015) premiered last year, delivering a personal story about Indian culture and spirituality to a global audience. A largely autobiographical tale directed by Sanjay Patel, it centers around the duality of his Indian-American identity, a largely underrepresented demographic in the Western-dominated field of animation and digital storytelling.

In an interview with The Verge, Patel said “It felt really important to me to have America see this, and have Pixar and Disney say it’s normal.” In the short, little Sanjay is enamored by a Transformers-like superhero action figure and TV show, only reluctantly joining his father for a prayer session. Midway through Sanjay’s feigned meditation, he falls into a dream-like trance, where he confronts a demon (or rakshasa) while being defended by the great Hindu deities Vishnu, Durga and Hanuman. In the end, Sanjay makes it out just fine, as he and his father come to not only understand but also respect each other’s cultural differences. Sanjay even gets to see his Transformers-like toy placed in the prayer cabinet, showing audiences how new and old idols can coexist side by side.

Sanjay’s Super Team not only casts a spotlight on Indian cultural experiences, but also on the artistic talent Indian creators can bring to digital storytelling. Choreographed by celebrated dancer Katherine Kunhiraman, the epic fight scene between good and evil brings classical Indian dance forms such as Bharatanatyam, Odissi and Kathakali into the world of Disney. However, Sanjay’s Super Team does more than just introduce a genuine and nuanced Indian experience into popular Western culture. It paves the way forward for a new kind of storytelling in India as well, helping older generations digitise their most ancient cultural traditions so they connect with the new, tech-enabled and increasingly global generations.

Gamaya Inc., founded by Narayanan Vaidyanathan, also brings Indian mythology to life with a quest-based videogame featuring Indian divinities on a mission to restore the sacred Ramayana text to safety. Aside from citing the Amar Chitra Katha comic books as a major source of inspiration, Vaidyanathan said that “my grandmother’s storytelling has always played a big part in inspiring me to make a product using Indian folklore.” Gamaya Legends allows Vaidyanathan to pass down his grandmother’s storytelling onto his daughter. “As a kid, I listened to many stories from my grandmother that inspired and entertained me,” he explained. “As a parent, I want my kid to have the same experience. But today’s kids are harder to please—they are used to slick animation and engaging games.” Vaidyanathan sought a way to help kids in the modern world connect with these important cultural traditions. “We set out to create an experience that spoke in a language our kids [could] understand—with a highly engaging presentation that blends the real and virtual worlds.”

Echoing the sentiments (and even the story beats) of Sanjay’s Super Team, Gamaya Legends not only allows kids to explore these legends in a mobile action game, but also brings real-world toys to life. Following the smart electronic toys trend popularised by Skylanders and Nintendo’s Amiibos, inGamaya Legends kids can buy internet-connected figurines of their favourite mythological heroes that, when placed on the designated toy station, spring to action in the digital world. According to Vaidyanathan, Gamaya Legends “gives kids a cool action game where their real-world toys come to life and they discover the true legend of one of the greatest epics.”

At the same time, Gamaya Legends also blends popular Western themes and aesthetics with classic Indian folklore, addressing the interests of a generation that consumes pop culture from around the world. The art for the Ramayana scrolls in the game was even created by a concept artist who previously worked on World of Warcraft. “The characters are incredibly limited by what caste they are in—the idea is that you don’t choose your caste. So when the [the game] starts, you are given a little information about your character. This is the hand that [you’ve] been dealt and [you] have to adapt to it.”

The future of digitising Indian culture and storytelling only promises to evolve. As the country becomes increasingly internet-connected, younger generations must learn how to integrate their unique cultural influences into the largely Western-dominated tech space. By combining the rich cultural complexity of a modern Indian identity with the mass appeal of mainstream videogames and animated films, this digital storytelling crosses new frontiers and breaks old barriers. While helping to preserve Indian culture, it also challenges the grittier societal norms, issues, and assumptions of tradition.