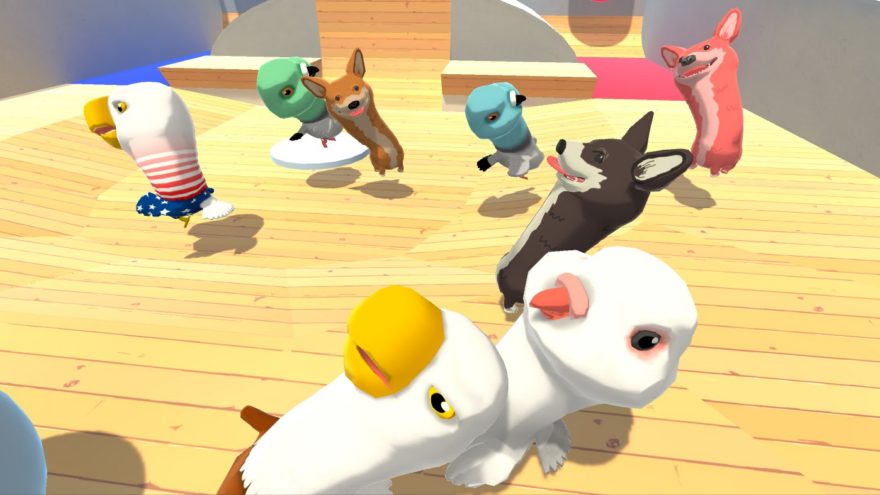 Chris Wade is a night owl. He typically won’t start doing his contract work for other games (Manifold Garden and Battle Chef Brigade, among others) and on developer tools until 1 or 2AM, when the rest of the world is asleep. But if Chris Wade wasn’t a night owl, maybe there’s a chance Sausage Sports Club—now funding on Kickstarter—wouldn’t exist.

“Often when I’m up that late and I’ve been working on side projects, I’ll find my mind wandering from the project and onto weird places on the internet,” Wade told me. “I feel like that’s probably pretty common.” He’ll watch highlight reels of sports, basketball or skateboarding mostly, seeing athletes perform what he describes as “wildly fluid, continuous motions for like 10 minutes.”

You can see this inspiration clearly in Sausage Sports Club—Wade’s current solo project. A multiplayer-focused, sausage-based physics sports game, Sausage Sports Club is about a group of animals (including a version of Wade’s own corgi, Watson) competing on a reality television show. Their bodies are defined by incredibly long necks and short stubby legs that propel them across obstacles and towards their goal in a a growing collection of sports games. They look squeezable as they charge haphazardly into the occasional explosive death.


The unique characters, which resemble chubby giraffes made of Play-Doh, were inspired by a talk given by game maker and teacher Bennett Foddy on the lagging bendy effect on stacks of physics bodies (as seen in Foddy’s competitive sports game Super Pole Riders). Inspired to use this effect as a central part of his own game, Wade prototyped what would become the adorable creatures that populate Sausage Sports Club: “The first result was a floppy, grounded tentacle controlled with [the] WASD [keys] … One problem, it felt restricting to be stuck to the floor. One obvious solution was to add legs, so I tried that.” Wade tracked several of the early concepts for the lead characters, including a terribly unfortunate one that looks a great deal like poop, but ended up with the floppy-eared corgi Scout that is the lead character of the game today.

“I think they can be graceful definitely, but in most contexts they tend to be silly”

It might seem strange to look at the goofy creatures of Sausage Sports Club and to know that they’re inspired by the fluid motion of athletes (Vince Carter or Rodney Mullen, for example). Wade doesn’t entirely disagree. He recognizes that his animals are a bit graceless: “I think they can be graceful definitely, but in most contexts they tend to be silly or maybe athletic.”

But his interest in the athletes, whose sports videos came to make up his late night work routine, wasn’t exclusively in their grace or the beauty of their movements. “I realized my interest in these sports videos was in how the athletes make the sport look majestic and awesome by being really really good at what they’re doing … a big inspiration for Sausage Sports Club was this realization that player bodies could be physical and real and directly controlled in a real-time game.”

You can find more information about Sausage Sports Club through its Kickstarter page, Steam Greenlight, or participate in its Playable Trailer in action every day from 7-9PM CST on Twitch.