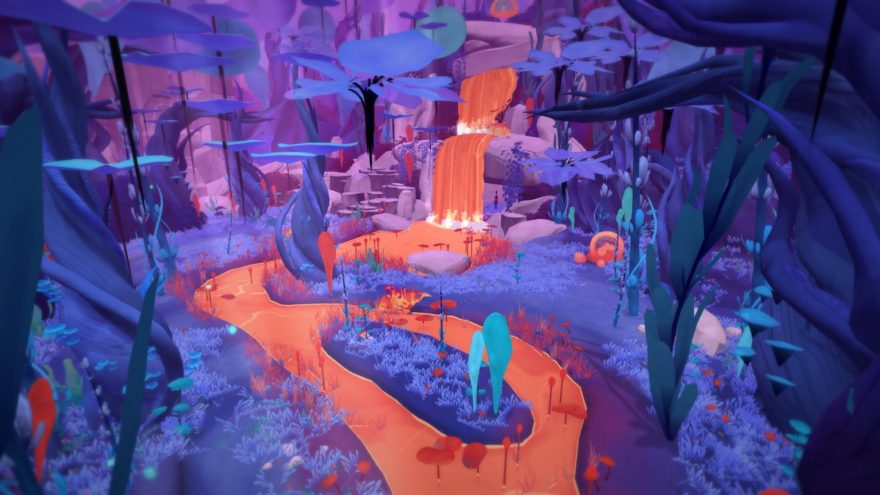 The students that made Quur say it’s a game about the impact of violence. But it’s not full of blood sloshing around the dirty concrete of some decrepit virtual city. Quur has the look of a game so innocent that you’d think it doesn’t even know what violence is outside of a kid stealing its lunch money. It’s a pretty little thing but don’t discredit it for its looks.

Sure, Quur doesn’t have the dynamism of say, Dishonored (2012) and Undertale (2015)—which also offer the choice of violence and non-violence, and change their worlds in huge ways depending on the approach you take—but it has merits in its illustration. As you might guess with only a single glance at Quur, where it excels is in the visual department. It presents a world and ecosystem that literally thrives on a magical liquid called Color. Fair warning: you’ll probably want to go on a vacation to an impossibly happy place after playing it.

In Quur, waterfalls are made of foam and bright orange, spilling into rivers that fork across the landscape as if the result of a disaster at a paint factory. No wonder the creatures and foliage are enticed to drink up the liquid—it looks like a substance made of rainbow drops and pure sugar. In turn, this liquid has had a vivid effect on the appearance of the world’s lush vegetation and timid creatures. Leaves, shoots, and skin look like the result of a melted jellybean.

Where Quur starts getting into its little spiel on violence is through the creature you play: some lithe, inky being that is able to manipulate Color. They can suck it up from the rivers and puddles and have it orbit their body, ready to use in any way they wish. But Quur offers only a few options with its button scheme: you can punch with Color, throw it as a projectile, or raise it like spikes from the ground to scare off nearby intruders.

With these at your disposal, it’s up to you whether to weaponize Color or not, turning it against the creatures that thrive on it. If you do, and you kill them outright, each animal and the surrounding area will be drained of its color so it becomes pure white. It’s saddening to see, especially as the game doesn’t prompt you to attack the animals in any way, meaning the arrival at that decision is all your own doing (prepare some inward thinking and reflection, you monster). The behavior of the animals also helps to weigh down on the guilt: the smaller creatures back off and growl like a nervous dog if you get close, while the bigger ones bark in warning and will attack first if you don’t back off. They want to be left alone.

Quur has a simple message at its heart, then: work with rather than against the world. It’s an eco-friendly videogame made in pretty colors. Perhaps some will find its metaphor a little too obvious, practically a cliché, and I wouldn’t disagree, but it’s still great to look at—almost like a painting turned into a game.

You can download Quur for free over on itch.io.