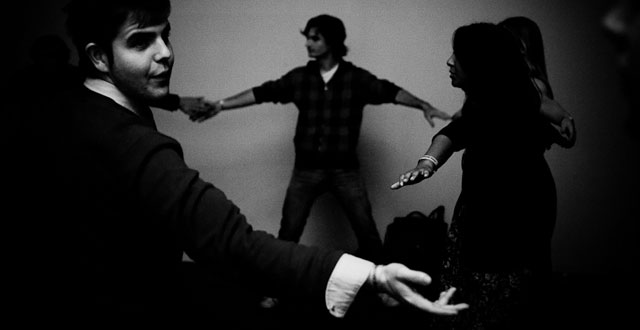 This article was originally delivered last week as a “microtalk” at the Game Developers Conference 2011. The format dictates that all speakers must also use 20 slides that auto-advance every 16 seconds! So if you dare, attempt to read the following in about five minutes.

Hello. My name is Jamin Warren, and I run a videogame arts and culture company called Kill Screen. We publish a website, a magazine, throw parties, and just generally make cool stuff. Kill Screen started from a simple idea. Chris Dahlen, my partner, and I were upset at the state of videogame culture. Chiefly, that the only stories that were being told were these: the over-amped gamer clawing for achievements. We wanted to create an environment that looked more like this: the culturally sophisticated adult fretting about their life and their children. I suppose it was just trading one form of dysfunction for another, but we decided to start telling stories about the latter, because that’s what the former grows up into anyway.

Harvey Molotch is a professor at NYU, and he spends a lot of time thinking about toasters and putting them through an existential crisis. He asks this strange question, “What is a toaster?” That is, what makes the toaster its most toastfulness? The shape? The pop-up? The color? He calls that interplay of all these different elements: “lashup.” A toaster is not one of the things, but an interplay of all of them, from design decisions to cultural contexts. Essentially, goods provide a basis in a number of different ways, including their use, for there to be a sense of social reality. Really what Molotch is saying is that objects have stories, and that we gain a better understanding of “object culture” by understanding the component parts.

Games are these befuddling mixes of different thoughts, ideas, and meanings. They come from places; they take us places.

So what does that mean for games? Well, first, games are clearly objects, at the very least. They often come in boxes, or we download them on our computers. They are things that we consume. Now, Molotch is more interested in physical objects, but games, to my mind, still fit into his world. Games are these befuddling mixes of different thoughts, ideas, and meanings. They come from places; they take us places.

Now Molotch is interested in objects because they have stories. They have identities, and anthropologists like him are interested in unpacking those stories for the public. And so that leads me to what shouldn’t be surprising: If games are objects with stories, then those who consume are immersed in a world of story, whether they realize it or not. Chiefly, videogame players are storytellers. So why is that important?

There’s a wonderful blog called Significant Objects that’s run by Rob Walker, a New York Times Magazine columnist, and Josh Glenn. Significant Objects started with a simple hypotheses—that objects could increase in value simply if they were infused with the power of story. So he and his partner started pulling objects from yard sales and assigning them to writers. The writers would produce these elaborate backstories—Jonathan Lethem on a Missouri shotglass, Colson Whitehead on a gavel, Nicholson Baker on a meat thermometer—and then the objects would be put up for sale on eBay for charity. What they found was fascinating. These everyday objects, things that would normally be discarded as junk, increased in value 30-fold.

Aside from the monetary value added, the point is that Significant Objects encourages writers to say what they consume, or at least to imagine how one might have used that object. That meaning is actually created when people start telling stories about the things that live in their home.

I’m saying the same thing about games. It’s not that I care about games selling better, because frankly I don’t. But I am interested in creating a different type of value. We as videogame players have what I’m calling the dinner-table problem. We’ve all been there. At a classy affair with friends and coworkers. Or even worse, on a date. The subject of videogames comes up, and one of two things happen. Either everyone waits for you to finish. Or—and this is a magical moment—when you meet someone who’s run the same instance as you, or loves BioWare, or just wants to talk Angry Birds, the two of you sequester yourselves for an evening of mirth and laughter.

As proudly as the “games are art” banner is flown, we are people of glass jaws, easily shattered when someone says simply and honestly, “I’m not a gamer.”

But what of the rest of the table? The cultural divide that videogames face has less to do with the content itself, as Chris Hecker suggested. It comes from a simple inability to discuss with others what is happening when we inhabit a game world of any kind. The stony silence or disinterest we might face from those we love has driven us inward and only into the arms of one another. As proudly as the “games are art” banner is flown, we are people of glass jaws, easily shattered when someone says simply and honestly, “I’m not a gamer.”

What videogames lack is a vernacular. A native tongue that all who play games can converse in openly. The lack of this common narrative culture frightens me as we are moving out of a world where people ask, “Are you a gamer?” and moving into a world where we ask, “What games do you play?” We are finally crossing that precipice, but when we finally find our voice, we will have nothing to say.

To that I say no more. Chuck Klosterman had this to say about videogame critics, but ultimately about dialogue about games: “Videogames provide an opportunity to write about the cultural consequence of free will, a concept that has as much to do with the audience as it does with the art form. However, I can’t see how such an evolution could happen, mostly because there’s no one to develop into these ‘potentiality critics.’ Videogame criticism can’t evolve, because videogame criticism can’t get started.”

Klosterman was talking about writers and their inability to relate what happens in game worlds to the public. What I am asking for is something both simple and more difficult. But it is certainly more bold. We need to overcome the dinner-table problem. We need to embrace our stories.

The tales that athletes spin about their glory days on court and on field are their medals of honor—proof that the moments they lived were something real. They pull you into those moments, make you live them as well. As gamers we have those moments. The time I, as Nathan Drake, kicked a soldier out of the blown-out window of a falling building. The time I cried at the sight of flower petals reclaiming a lost city. When I watched a child, a little sister, turn into a grown woman. The many times I saved a princess.

These are our stories, and they are as real as anything that’s ever happened to me. But if I never tell that girl at the bar, the friend at the reunion, that coworker at lunch, then they fade into ether. In short, they didn’t exist. Director Alejandro Jodorowsky recently tweeted this: “Si hablo, creo futuros. Si callo, el presente es eterno.” Roughly, that translates to: If I speak, I create futures. If I keep quiet, the present is eternal.

But there’s a simpler maxim. Say how you play.