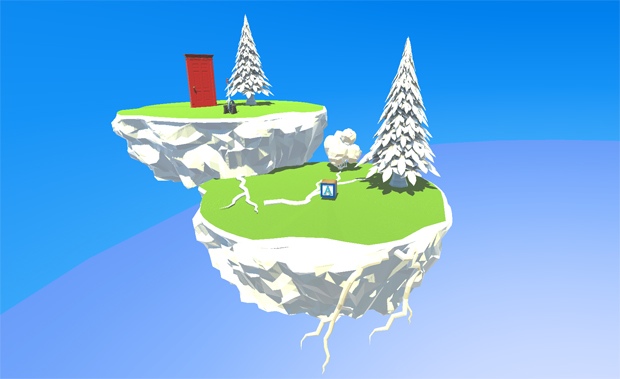 Scale is a puzzle game with a straightforward elevator pitch: “You wield a device that can make any item any size.” This is a popular pitch. It earned the game $108,020 in funding from over 5,000 backers during its Kickstarter campaign. Steve Swink, Scale’s creator, subsequently created an alpha version of the game and has now written about what he’s learned in an illuminating update.

Swink’s post helpfully addresses the challenges of scaling (excuse the pun) from a demo to an actual game. Things that worked in the former may not be as compelling in the latter. The growing size of a game normally calls for more things to do—playing an overlong demo is unappealing—but that growth can come at the risk of coherence. “If the grammar of the game isn’t carefully developed as the levels progress, lateral leaps of intuition will feel unfair,” Swink writes. “The player won’t be able to figure it out.”

One of the functions of game design is to establish a series of patterns—a language, of sorts—that players can easily understand and follow. The limited size of a demo makes it relatively easy to teach these patterns. You use what you just used. But as Swink notes, this process gets harder when it comes time to scale:

As a designer, I have a pretty good sense of what the player is thinking in the earlier levels – whatever they just learned they look to apply to everything. The thing I’m working on now is the later levels: if the player has 10 ideas, concepts, and mechanics in mind it’s harder to intuit what they might be thinking entering a given level.

Swink helpfully details the different ways in which this problem has manifested itself in his post, which you should read it in its entirety. The story of Scale, however, is not self-contained; many of Swink’s points could be applied to the videogame industry writ large. Last week, I covered the overwhelming success of tabletop games—both financially and in terms of satisfaction—on Kickstarter. One of the main factors in that success was the existence of a growing ecosystem to help developers take tabletop games from demos to products their backers can enjoy. The route from demo to finished project, as Swink’s post attests, remains more complicated for videogames. Videogame demos correspond less closely to finished products, thereby necessitating the kind of work Swink writes about. A pipeline for videogames like the one tabletop game developers discuss would be nice, but in the meanwhile, I’d happily settle for Swipe.