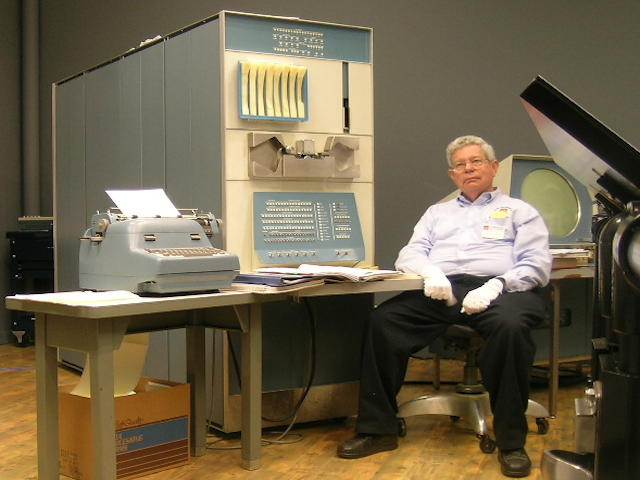 IndieCade celebrates games built without major studio support, so it’s fitting that the keynote speaker on the first day of the festival was Steve Russell, the creator of the first videogame to be played across the United States. After all, he built Spacewar! largely by himself.

“I have occasionally been accused,” he joked,” “of unleashing the curse of videogames upon the world.”

A peach of a guy with a friendly belly and a full rack of white hair, Russell sat on stage in the Ivy Substation in Culver City with John Romero, the co-creator of Doom. The latter occasionally offered a question to the former, but mostly sat in smiling adulation of the chuckling Buddha of interactive play.

Russell’s current temple is the Computer History Museum in Mountain View, where he maintains an operational PDP-1 computer, the Cold War behemoth on which he programmed Spacewar! in his spare time from his job as a computer scientist at MIT. The game, a two-player spaceship torpedo battle complicated by the tug of a star, was built as a demonstration for the $120,000 computer (almost $1 million in 2012 dollars).

There were challenges. The gravitational pull of the star affected the ships but not their torpedos.

“So we made them photon torpedos,” Russell said, to laughter.

The ships were initially controlled by switches on the computer control panel, which other scientists at MIT found hard on the neck muscles given the position of the display. So they rigged up some handheld boxes, and the controller was born. The game eventually spread everywhere that had a PDP-1. Because of the prohibitive cost, this mostly meant universities. Rumors spread of enthralled Stanford students who compared the experience of playing Spacewar! for the first time to dropping acid.

As the men talked, pictures of Russell’s lab flashed across a screen: young math geniuses in Buddy Holly glasses and Mad Men suits, clutching handboxes, bearing what must have been some of history’s first gamer grins.

The scientists had limited time on the two PDPs at MIT, and Russell faced a little criticism, he said, for “wasting valuable computer time” on something as trivial as game. Romero laughed long at this, and at the other wild anachronisms of the first game development.

Romero, whose hair truly has to be seen to be believed, was especially tickled that Russell did somewhere between 100 and 1000 times as much testing as he did coding. The current industry rule of thumb is one to one.

As the conversation waned, Russell, in a black Spacewar! t-shirt, offered a final endorsement for the legacy of his game, fifty years on: