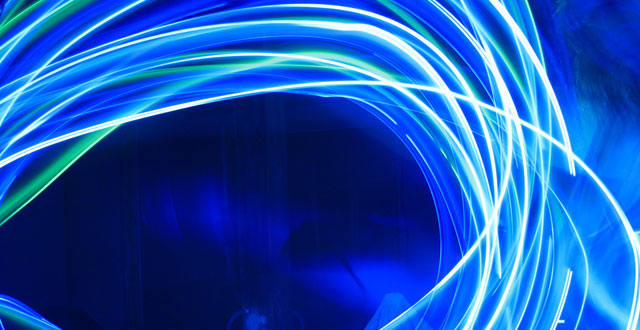 Sneak is such a dirty word. Let’s say I finagle my way into the Nintendo press conference. Hundreds are lined up, dribbling into the Nokia Theatre. A side door, beyond the gated queue and accessible, opens to increase the bottlenecked flow. I wait, then meander over, keeping my hands dug into my pockets, the orange wristbands given out to the lucky invitees potentially around my wrists, hiding as they are under cover of denim. Inside the door I empty my pockets into a bin, and walk through a security gate and down a long grey hallway before coming upon the masses, entering through the front door. I tail a guy coming out from the bathroom and clandestinely become a fifth wheel, unbeknownst to the group of four in front of me. We approach an escalator. This is the final level to breach. A tall black man in a full beard, wearing the official blue of Nokia Theatre security, raises his hand at me.

“Hey!” I slowly turn. “That’s really good… I like that!” He’s pointing at my face, covered in two thick muttonchops of reddish-brown hair. “Oh… thank you.” I bend the widest smile I can. He chuckles and shakes his head. I follow my unwitting accomplices onto the rising staircase. Soon we enter a set of doors, and I see Miyamoto onstage with Bill Trinen, his voice and translator, talking about Zelda’s 25th anniversary. I’m in.

Oregon Trail shirts are also in this year. Outside the Nokia, I see an older gentleman wearing one with an Apple IIc-era graphic of a tombstone. The epithet: “You have died of dysentery.” Later on, I spot a younger attendee, his back depicting pixilated zombies in front of a pixilated jalopy, a few square spatters of blood on the hood. “Organ Trail,” it says. I can think of no better way to sum up the last 30 years of game-design evolution.

E3 is sort of like a giant tech-filled Old Country Buffet. Everything on offer tastes good, but you inevitably over-stack your plate and end up feeling sick. It’s necessary to pick and choose. Today I focus on the West Hall, with Sony and Nintendo’s mega-booths lording over the remainders. Small wins compensate for a bevy of niggling defeats. WIN: I hold the new Wii U controller, its 6.2-inch touchscreen an oasis of hope and confusion. LOSE: At the Zhongguancun booth, which represents a group of Chinese developers (a large banner hangs from the rafters touting “WE ARE FROM CHINA”), I spin a giant prize wheel and land on “Silk Ties.” But the booth is empty. No one sees. I move along.

A strange feeling of remorse comes over me when, surrounded by this throng, I see a game ignored. Pulled in by this gravity of loss I step up to Magical Drop V, a puzzler by UTV Ignition for Xbox Live Arcade. Even the developers don’t care; you play the game using generic GameStop controllers. The anime stylings and Bust-a-Move-ish mechanics lull me into a false sense of confidence. I choose Normal difficulty over Easy and am quickly vanquished. I try again and fail again. This is my sacrifice for this small game, lost in the noise, my defeat a kind of vicarious penance. But then a skinny redhead waiting behind me picks up the cheap plastic controls and, man, he kills it. I have much to learn.

I pop into the men’s room, to wash my hands before seeking out a soft spot to lean on and eat my protein bar in peace. A message greets my reflection: “Did you wash your controllers?” It’s an ad for Microsoft’s Kinect, the camera-based peripheral where you control the game through real-time movements. Cute message, I think, then pull out my notebook. I realize I’m jotting notes while lingering outside a line-up of urinals, snooping on my peers relieving themselves. I walk quickly away.

Other companies use more direct tactics to gain your attention. The booth for Prime World/Nival features a 15-foot blow-up castle. Someone calls out, “30 seconds in the Bounce House! Win a chance for a 55-inch TV!” I walk past and see, past the netted entrance, a girl, already bouncing. Her shirt is tied in a knot above her navel. Now she’s grabbing the net, stalking the passers-by, almost taunting them. You think you can bounce with me? An over-matched kid enters. Soon they’re both jumping up and down, on opposite sides of the plastic, the Bounce House rocking. I fear for an onslaught of Jell-O, pouring from a secret tube above, but no. He gains confidence equal to all that kinetic energy and does a flip. She hoots and hollers. A small crowd gathers to peer through the netting. A woman outside says, “Time’s up!” The kid slowly exits feet first. “Thanks for the bounce!” he calls out behind him, his brow glistening.

Problem is, I have no idea what products these booths are hawking. Prime World could be an online free-to-play social games site [Ed. It is!]. Navel could be a TV-screen technology group. I mean Nivel. But I don’t know. All I know is the bouncing. Maybe that’s enough.

A section of floor is marked off by thick tape. Eight pairs of balled-up socks lie in the middle. Suddenly two teams of three run after the ammunition, tossing and dodging and laughing. This is Dodge-Sock. The competitors help run the booth for Indiecade, a group that helps promote independent games that otherwise might not be noticed. Let it be known: E3 2011 Game of the Show…Flywrench. Seek it out.

Lines snake around makeshift walls filled with high-definition windows into fantasy lands. A giant monitor displays two players competing in Street Fighter X Tekken, the new crossover fighter from Capcom and Namco, the characters life-size, their musculature rippling like flesh-toned cumulus clouds. Display shelves house an abundance of accessories for anything with a screen: grips, screens, handles, bags, totes, wheels, cords, chargers, in pink or blue or green or phosphorescent. The edges of discrete objects blur together, everything conjoined in an osmotic glow.

A man with slicked hair stares at a booth-babe’s back, stock-still, his eyes wide and murderous, while a member of his team films them, panning back and forth between the two. They try another take. Alright—They got what they wanted. The man breaks character and smiles. Before leaving he taps the woman’s shoulder. “That was great, thanks.” She turns, unfazed, pleased to be of service.

The atmosphere of a company’s booth doubles as a thumbprint. I walk through Sony’s main console section. Gunfire surrounds me. Kiosks holding Sony televisions are all-black. The floor vibrates at irregular intervals. Carpeting here looks darker than anywhere else, psychosomatic decor. The names of games on display mirror the no-doubt choreographed tone. Dark Souls.Twisted Metal. The cheeriest title is Captain America: Super Soldier. I watch another play, and our patriot drives his boot slow-mo into an enemy’s chest, an enemy I assume for some reason is a Nazi. He brings his knee up to the assailant’s lurching head; his Nazi jaw erupts into teeth and spit, but it might just be a comic-book-style flower of Ka-POW light. The Captain yells in a deep, guttural tone with each attempt at pummeling. I walk on. My throat is beginning to hurt.

Alongside one wall of the West Hall’s lobby is the Ford Fiesta Social Club, a pseudo-lounge for Expo goers to chill and re-hydrate with a lemon-infused water. A line-up of cars appear to be stationary props, eye candy for the Top Gear lovers among us. But they serve a purpose. I open the door of a Granny Smith Apple-green Fiesta and get in the passenger side. The door closes. Everything—the squeak of sneakers, the trailers for The Witcher 2 on loop, the rehearsed pitches and demo blurbs—everything goes quiet. The other door opens. “Mind if I join you?” asks Chuck, wearing a Ford collared shirt. Of course, please do. He leaves his leg dangling over the threshold—“But close the door?”

Chuck grew up on Catalina Island, off the coast of Long Beach. He’s not really a gamer. The family grew up without a TV. He spent his days surfing, or learning how to spear-fish. Now he works for Ford in its marketing department. I listen, zoning out. The leather seats adhere to my bony waist like your favorite Aunt’s knobby hands around your cheeks, not yet filled with her famous cauliflower casserole. Which is to say, they felt better than they probably should have. We open the doors. Sound rushes in like a wave.

Back at the Sony booth, a row of rooms feature different Move-enabled games. One game is called Everybody Dance. It strikes me then, watching a fellow bob and weave alongside the capable rhythms of the Sony demonstrator, that the success of dance games is a shocking, shocking feat. Take something most people don’t do well. Then tell them to do it in front of others. After you pay $60. It’s like working as a street busker, but you pay the crowd to watch as you practice juggling.

The last game I play is the high-definition revamp of The House of the Dead: Overkill for PS3. I grab a plastic pistol, a glowing red ball on the end of its barrel, and point it at the screen. Zombies lollygag through a hospital corridor. I aim my reticule near the shoulder joint of an undead nurse and squeeze the trigger. Her arm explodes off her torso, the disconnected limb falling to the floor. Another slug in her brain and the dogged pursuit ends in her blood-bomb of a head going off. The clause begs the question: If a brain remains in a dead body, is it still a brain? Does the organ die with the donor? Or is a rotting corpse filled with salvageable goods, the way a powered-down freezer’s contents will remain edible for some time, as long as you keep the door closed?

Meanwhile, the demo’s end boss, a callow water zombie named the Screamer with hair like muddy entrails, slashes me until the screen runs red. I thank the demonstrator and leave the room. The organ inside my head thinks meager thoughts, pushing for unwarranted connections. Did I just play a game called Overkill? Was I defeated by the Screamer? Or is that just a name I made up, this day a mirage, a seething engine of people and product and bass vibrations, the air wavering as if bent by gasoline fumes?

It’s 6:00 p.m. We exit the hall, stumbling outside onto the glittery sidewalk. I breathe in air freshly tinted with second-hand smoke. Columns of pedestrians, six across, head left toward the hotels. I turn right but stop. An RV waits at a red light, at the intersection of Figueroa and Pico, the Cars’ “She’s My Best Friend’s Girl” blaring from a speaker attached to the roof, its side studded with fat Christmas lights. I’ve lost my ability to parse what’s important from what’s not. I’d say this was purposeful, this inundating of context-less detail to the point of saturation. But let’s not push things, shall we? Tomorrow is another long day.

Read about the first, third and last day of E3. Photograph by Brittany G